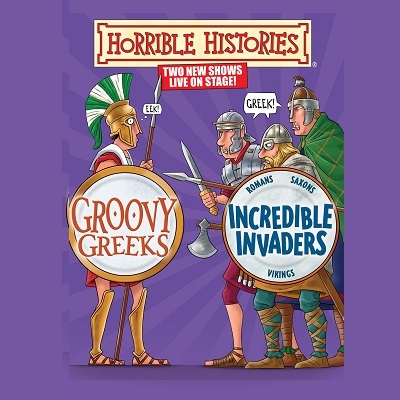 Interviews with some of the characters from Horrible Histories’ new tour Groovy Greeks and Incredible Invaders.

Q&A with Alfred the Great King of Wessex

Hi Alfie what’s it all about – what makes you so great?

Well I’m the only English king ever called ‘Great’ in two thousand years of history & I must admit I was pretty cute and I beat those vicious Vikings too at the Battle of Edington with a Saxon army of over 4 thousand men, which was huge in the 9th century. But I wasn’t just a tactical genius I also tried to govern well & fairly and introduced new laws about crime & punishments.

Tell us more about the way you judged people – was it trial by jury?

No not really more trial by ordeal! To test if a person was guilty of a crime, I said that he had to hold a red-hot iron! If his hand healed quickly, he was innocent. If not, he was guilty. God decided then I punished them!

Did you really burn those buns?

Well I’m no Mary Berry but I’ve had a very unfair deal with that story – just a moment’s lapse in concentration (and I did have a lot of important things on my mind you know like how to beat the Vikings) and I’m forever labelled an idiot in the kitchen. Well I’d like to put the record straight here and now and tell you about my signature dish of sheep’s brains lightly poached with skylarks, snails & seaweed its absolutely delicious. First catch your skylarks then …..

Q&A with Boudicca the Queen of the Iceni Tribe

Well life is really tough for us Celts! We are having to put up with Emperor Nero and all of his disgusting Roman habits which is why I decided to do something about it! Can you believe those pigs totally ignored my husband, the king’s dying wishes! He left half of the kingdom to us, the Iceni tribe, but those arrogant Romans wanted to take it all. The Roman Governor here, Gaius Suetonius Paulinus was not happy about our uprising at all I can tell you! I certainly put a spanner in the works for him when I burnt some of his favourite cities including Londinium – Hah serve the old cowardly custard right!

Talking custard what sort of things do you like to eat ?

Oh we do like our food! I’d like to say I enjoy a good kebab in Croydon high street on a Friday night after slaughtering some Romans but unfortunately kebabs aren’t around here in AD 60! But we hunt for meat and enjoy a good feast on a good bird or 2! Sitting around having a feast is one of my favourite past times. We grow our own veg which is a great addition to our diet, not a great addition to the smell from our bottoms though – perhaps I should buy one of those useful Roman poo sticks!

What do you think about the Romans then?

Oh I love them, they are my best friends! NOT! I hate them and if I was able to kill them all single handily then I would! That arrogant lot need to be taught a lesson and Boudicca is just the woman for the job – after all my name does mean Victory so those miserable Romans had better keep that in mind! But here’s a good joke, what do you call a Roman with a cold? Julius Sneezer – Boom Boom!

Q&A with Zeus king of the ancient Greek gods

So then Greek god tell us a little about yourself

Well the ancient Greeks had lots of gods but I’m the king, I’m number one it all started with me and I’m the greatest!

And so modest with it

Yes and when I’m challenged by a family of earthlings in Horrible Histories: Groovy Greeks to prove I’m the best of all the gods I sing a pretty awesome little ditty in ‘gods have talent!’ which goes something like this….

I must admit I’m pretty irresistible to the fair sex. I can turn myself into any creature I fancy, a bull, a swan whatever it takes to turn a beautiful woman’s head and of course I have my lightning bolts which can be quite a turn on you know.

We can imagine! But we hear that you have some competition in this show other gods competing for the top spot?

What those second-raters! That drip Poseidon and the pink puff-ball Aphrodite don’t scare me. He should stick to his oceans & she’s all hot air and nonsense. No I’m definitely top dog, or bull, around here on Mount Olympus – just listen to my thunderbolts and watch out earthlings!

Groovy Greeks and Incredible invaders are currently touring the country. Catch them while you can. Full details and tour dates here.