Patrick Hamilton’s classic thriller Gaslight starring Kara Tointon is heading to the Theatre Royal Brighton between Mon 6 – Sat 11 Feb. Although a play set in the 1880s, it has startling relevance to today, as the cast explain :

With whodunnits playing in the West End and up and down the country, audiences have never been more eager for a cracking good thriller. With Gaslight they’ll certainly be getting that but with a unique psychological twist.

Director Anthony Banks describes the Patrick Hamilton classic, which he’s revived for the UK tour, as a one-off. “There isn’t really anything like this,” says Banks, whose wide-ranging directing credits include Patrick Marber’s After Miss Julie, Tennessee Williams’ The Hotel Plays and Mark Ravenhill’s The Experiment. “It’s an incident-rich play and every page something unexpected happens. In that sense it’s a built-to-deliver thriller.”

He smiles. “Except it’s not because the play itself plays with your mind. You’ve paid your money to see a Victorian thriller but actually it’s psychotherapy.”

Heading the cast is Kara Tointon, who is best known for Mr Selfridge and Strictly Come Dancing on TV and who was an acclaimed Eliza Doolittle in a West End revival of Pygmalion. Of Gaslight she says: “It’s not the normal whodunnit. It’s a psychological thriller and the key is to keep the audience guessing.”

Her co-star Rupert Young, who was Sir Leon in the BBC’s Merlin and whose theatre credits include High Society and While The Sun Shines, agrees. “It’s all about the psychology of it,” Rupert believes. “You’re trying to work out who’s speaking the truth, who isn’t, who’s mad… It’s very complex. It plays with the audience’s minds.”

And Keith Allen, whose credits across stage and screen are too numerous to mention, adds: “There are very interesting layers running through it and you realise how clever Patrick Hamilton was with words. The writing is very, very good.”

Tointon is enjoying exploring the character of Bella, who is baffled by objects going missing, the sound of footsteps above the lounge of her and her husband Jack’s middle class home and the mysterious flickering of the gaslight. “She’s got real zest and feistiness in her,” the actress says of a woman who questions her sanity and whose manipulative husband has his own agenda. “She’s pushing against a wind of negativity coming towards her from her husband, who is damaging her mentally. But she’s optimistic and she’s trying to make the best of things, even though she’s doubting herself.”

Young is the husband who keeps disappearing from the house but won’t tell Bella where he’s going and Allen is the retired Detective Rough whose sudden appearance leads to a shocking, marriage-rocking discovery.  “And it’s an apt name because he’s a rough-edged diamond,” Allen says. “I think he’s got a good heart but he’s obsessed, like a terrier, and he’s absolutely determined to get to the bottom of things at all costs.”

The actor, who sees the ex-detective as a mixture of Derren Brown and Columbo, believes  Rough is doing a bit of gaslighting himself – a term which the Oxford Dictionary defines as manipulating someone “by psychological means into doubting their own sanity” and which originates from Hamilton’s play.

The author wrote it in 1938 but set it in 1880, thus viewing Victorian times from a 20th century perspective. “The era he set it in is pre-Freudian, pre-sociology, pre-marriage guidance,” reflects Banks. “The plays of that era were nothing like this psychological examination. They were about manners, they were comedic, they were romps on the whole and very popular too.”

Allen believes Hamilton, who in his many novels used a Dickensian style to explore present-day London, wanted to play with the tropes of Victorian melodrama. “The format was a bit obvious, with the good, the bad, the hero, the villain. But Hamilton overlaid it with early 20th century Freudian psychology, which didn’t exist in Victorian times.” He smiles. “If you’d put this play on during the time it was set audiences wouldn’t have had a clue what you were on about. Well, ironically they probably would have but they were never given this type of play.” 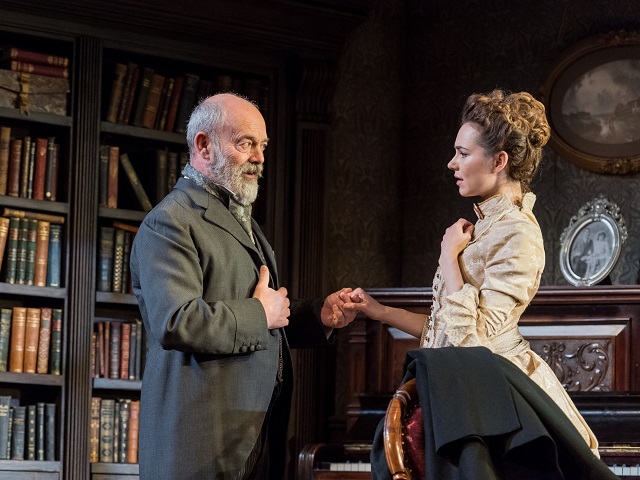 Tointon concurs, saying: “This sort of play would never have been written in the time it was set and I find that really interesting.” Pointing out that in Victorian times Shakespeare plays were often amended to have happy endings, the actress adds: “Everyone wanted to laugh and have fun and you’d never have got anything with a tragic ending.”

Originally two-worded as Gas Light, the play ran for six months at London’s Apollo Theatre and, retitled Angel Street, enjoyed a longer run on Broadway – opening in December 1941, transferring theatres in October 1944 and closing at the end of December that year. It has had many revivals since then on both sides of the Atlantic, has been made into a film twice (in Britain in 1940 and America in 1944), has been done on the radio and has been adapted for British, Australian and even Polish TV.

Anthony Banks sees it as “a really rich creation” that has a strong female character at its centre. As for the tone of the storytelling, the director says: “I’m very interested in the fine, blurry, sometimes invisible line between comedy and tragedy and I think this play gives it in dollops. And then there’s the character of Rough, who is a bit Dickensian, a bit Conan Doyle. He brings a whole other show with him when he arrives.”

With Donald Trump being accused of gaslighting America in his election campaign and a new law on coercive control being passed in 2015, carrying with it a jail sentence of up to five years, the play feels more relevant than ever.

“The fact it’s set in the Victorian era is a bit of a red herring,” Allen believes. “In the world we’re living in now, there are very real concerns about abuse and control, especially with the internet.” And Young feels Gaslight seems more pertinent than it ever was because people are much more aware of psychology. “More people go to therapy, we read more about abusive relationships, people are more in touch with how the brain works.”

Plus, of course, audiences enjoy a good scare. Tointon notes: “It seems like a time where people are enjoying that intense thriller experience. On TV now there are a lot of programmes where suspense drives the show and it’s even more fun to see that on stage. And most of the theatres we’ll be performing in are perfect for this play because they’re old and Victorian and they have that atmosphere. Plus we’re going out on tour in winter, with a play set in winter, it’s cold outside and there’s something chilly happening on stage.”

But his leading lady points out that there’s lightness amidst the play’s dark themes and atmosphere. “There’s so much light and comedy in it. I guess we always see humour in the darkest things. If you don’t laugh you scream.” Tointon smiles. “We’re giving people a chance to do both.”

1 thought on “Interview with the cast from GASLIGHT”