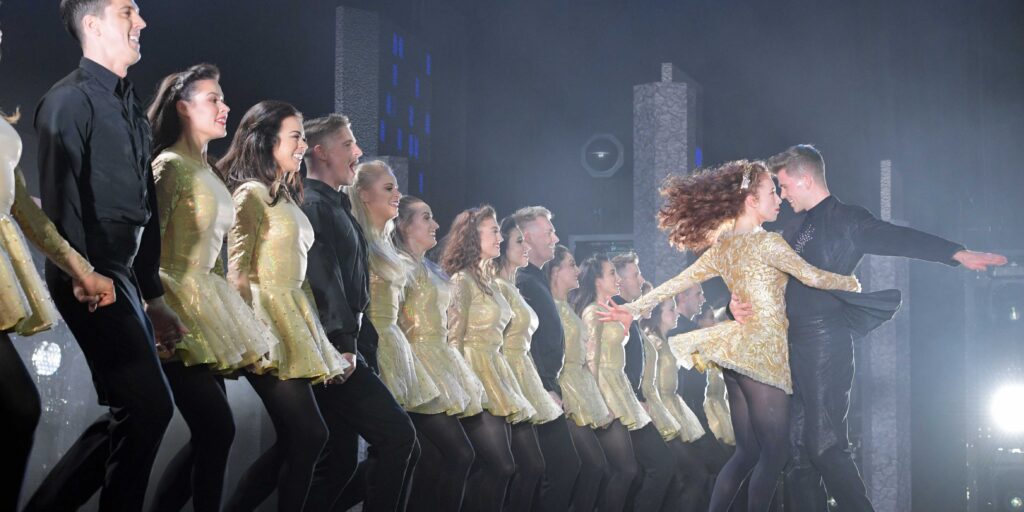 When the lights go up at the start of each performance of Riverdance: The New 25th Anniversary Show this year, the excitement will be palpable, not just from the audience but very much from all the performers too. The cast of Riverdance has an adage that goes back to the very earliest days of this record breaking and globetrotting cultural phenomenon: “Every night is opening night”. The meaning is simple: every show is special; every audience deserves the best.

In the twenty-five breath-taking years since Riverdance first emerged onto the world stage, the show has played 12,160 performances to a live audience of over 28 million people, throughout forty-seven countries.   The show has reached a global television audience of over 300 billion people. UK audiences first welcomed Riverdance in 1995 with ten weeks of sold out shows in the Eventim Apollo Hammersmith, London.  Public demand for the show never waned and eleven sell out tours throughout England, Scotland and Wales followed.

Touring is what the Riverdance cast love and they are of course delighted to be back doing what they do best. The delay due to Covid was, according to lead dancer Bobby Hodges, “Confusing and upsetting for all of us. For the Arts world these last 18 months have felt like a loss”. With the world of entertainment returning to normality, this run of shows becomes not just a celebration of the quarter century milestone but of the art form and perhaps even theatre itself. Emotion and anticipation are high. Bobby, who kept himself sharp during Lockdown with boxing, Pilates and time in the gym, is clear on how keyed up the cast are, “The minute that the show was forced to close last year we were waiting for this greenlight. This is unfinished business and we can’t wait!”

Lead dancer Amy-Mae Dolan said, “Whilst in Lockdown I danced almost every day. It was hard at first because it made me sad as I was missing the show so much. We are ecstatic to be back. Some of us could not believe it at first, it was almost overwhelming but the rehearsal room feels somehow magical, the show is going to be everything we have wanted for 18 months. It was a dream to be in the show previously, now it’s a dream to be back”.

And the show truly is back, and back with a new look and feel.

Riverdance: The New 25th Anniversary Show is a powerful and stirring reinvention of this beloved family favourite. Composer Bill Whelan has rerecorded his mesmerising soundtrack while producer Moya Doherty and director John McColgan have completely reimagined the ground-breaking show with innovative and spectacular lighting, projection, stage and costume designs.

Her sentiments are echoed by Bobby, “There’s a new and vibrant cast with a core of performers, like myself, who have toured for a while with the show but we’ve got an amazing set of dancers who were born into a world in which Riverdance already existed. The show pre-dates the dancers!  It’s still very much the show that people know and love, but it’s been reimagined from the bottom to the top.”

Amy-Mae adds, “The visual aspect of the show has been transformed. The lights just seem brighter and the artists have done an incredible job connecting what’s on the screen to what’s happening on stage; it looks and feels beautiful”.

Bobby continues, “The whole show is a celebration of Irish music and culture: a true spectacle. It showcases the best of Irish culture but also features a world-class band, Flamenco, Russian dancers and American tappers. With Bill Whelan’s incredible music at its heart, it’s a celebration and a sharing of a world of differing and common histories and experiences”.

There is nothing casual about the return of the show, or these dancers’ attitudes to delivering this celebration. As Bobby says, “We have a torch to carry, a responsibility to inspire the next generation of performers.” It is not just the next performers that the show will touch; generations of fans have now been to see the show, with grandparents bringing grandchildren and the show giving many people their very first experience of live theatre. That is something that everybody connected with the show takes very seriously.

Every performance of Riverdance: The New 25th Anniversary Show delivers, Amy-Mae promises, “A show for the whole family, packed with high octane performances. It’s mesmerising and can take your breath away – the music certainly sends shivers down our spines when we’re dancing and we know that it moves people. It makes them emotional”

“The show is so unique. The world had never seen anything like it when it made its debut, because there was nothing like it. People see Riverdance and they love it.”

Perhaps the final word should go to Moya Doherty herself, who said, “Every Riverdance tour fills audiences with excitement but the return of the show to the live stage, after the limbo caused by the pandemic, creates new levels of anticipation. These audiences have been starved of live content, performers have been starved of opportunity to dance, sing and play music and theatres have been starved of the lifeblood which live performance brings. But that very starving is the reason that the moment the curtain lifts the levels of exuberance, joy and creative celebration will never have been witnessed before. We cannot wait to hear once again the sound of the music and those dance shoes on stages across the country”.