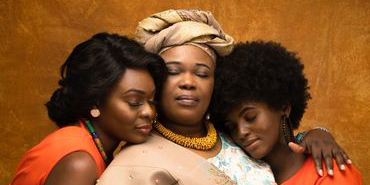 Here’s What She Said to Me

Utopia Theatre, a leading voice for African Theatre in the UK is a relatively new company (founded in 2012), certainly new to me, and I came to see this play having only seen a brief synopsis of it, prepared to be surprised and educated, as well as entertained. This hugely creative African themed performance delivered 100% by a small company of actors of African heritage gave me so much more. It was a revelation.


For a little over an hour and a half there could scarcely have been a more all encompassing, embracing production. Just three women, all of them almost never off stage, delivering a staggering amount of dialogue, playing a multitude of roles. They represented three generations of African women – alternately in Nigeria and London – the daughter, mother and grandmother regularly morphing into different generational parts and gender. The grandmother becomes the daughter, the mother becomes her male suitor and the daughter becomes a child, constantly changing character, age and gender. All done with complete ease and totally believable. No costume changes, no set changes and the only accompaniment was the occasional rhythmic drum beat and bar chimes delivered by a male performer seated behind the actors. The set was totally minimal: washed black and white ‘tie-dye’ drapes hanging from a frame, and the only ‘props’ were three pieces of fabric folded, unfolded and refolded by the performers.


So we have these three proud, voluble women: Agbeke (Anni Domingo), Omotola (`Oyin Orija) and Aramide (Lola May) all delivering powerful performances throughout this short play. Each vignette included movement, song and poetry and the struggles all of them experienced throughout their lives – spanning two hugely different countries and cultures – revealed their stories which were at times immensely poignant, shocking, fearless and joyous. Initially it took a little while to become accustomed to the patois and rhythm of the dialogue, but it was not long before the lyrical undulating speech became completely familiar to my ears.


The multi-generational stories we were shown represented the lives of these particular African women suffering repression and disappointment but also happiness and triumph across 30 years or so, each bravely coping with monumental changes and surviving them, essentially as a close knit family with cultural values which alter but never diminish.


However, do not for one minute think this play delivers a depressing vision of African female subjugation, it shows us chinks of this in both continents, yes, however by far the overriding message is of hope, optimism and love. Plus, the humour is at times laugh-out-loud. Anni Domingo as Agbeke in particular is hilarious in her mischievous asides to the audience.


The packed Connaught Studio Theatre in Worthing was the ideal intimate venue to showcase this wonderful play; the lively audience responded to every display of shifting emotions during movement through time and space, occasionally with low murmurs of shock alternating with hoots of laughter, joining in with the music and singing which brought the performance to a happy, clappy close.


This play, because of its unique style and incredible creativity enables us all to experience the authentic voices of the African diaspora. I came away from the theatre feeling brilliantly entertained, and very much enlightened.