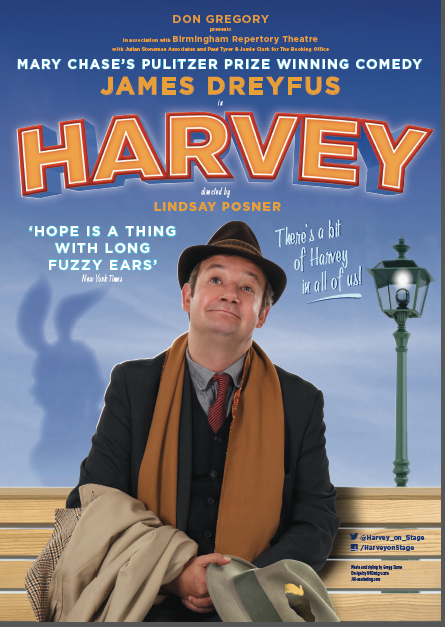 I had a personal reason to be excited about seeing Mary Chase’s Pulitzer Prize winning play Harvey last night at the Theatre Royal Haymarket. Thirty *cough*years ago it was the first play I was cast in (I played Nurse Ruth Kelly) and therefore I had very fond memories of it.

I was itching to see whether these memories were just rose-tinted glasses or well founded.

We are told that Harvey is a Pooka, which is a ‘mischievous faerie creature that materializes in various forms’. In this case he is an invisible 6ft 3inch white rabbit (yes really) and is the constant companion of gentle and friendly Elwood P. Dowd played by James Dreyfus (Candide, Breakfast at Tiffanys).

Harvey is Elwood’s best friend, they pass the time of day smoking and drinking together. Harvey spends much of the time at Elwood’s home at the chagrin of his sister, Veta Louise hilariously portrayed by the uber-talented Maureen Lipman and niece Myrtle Mae Ingrid Oliver.

We first meet Elwood (and indeed Harvey) when they embarrass Veta at a soiree she is holding for her society friends. Thinking that Eldwood’s obsession with his invisible friend is ruining her daughter’s chances of finding a suitable partner Veta decides to take matters into her own hands and admit Elwood into ‘Dr Chumley’s Rest’, a sanatorium run by – yes you’ve guessed it Dr Chumley.

Dr Chumley played by David Bamber, he is ably – or not so ably assissted by his team; Dr Lyman Sanderson Jack Hawkins (Rosencrantz and Guildenstein are dead), Nurse Ruth Kelly, Sally Scott (Charles III) who both provide the romantic element to the story and Duane Wilson, Youseff Kerkour (RSC) the orderly / henchman / subsequent love insterest for Myrtle.

No…Harvey is not politically correct and no, we shouldn’t be amused about the shameful way the cliental are treated at Dr Chumley’s Rest but somehow you don’t take offence as the characters are warm and brilliantly portrayed and have a positive likabilty, particularly Dreyfus and Lipman who comedic timing is first rate.

James Dreyfus is endearing as the eccentric man we would all like as a friend. He jokes and laughs with the imaginary Harvey in such a way that we believe the rabbit really is there.

Maureen Lipman is wonderful as the confused sister who struggles to know whether she is doing the right thing.

Peter McKintosh’s set revolved majestically from a warm library to a stark waiting room of the Dr Chumley’s Sanitorium and finally into a downtown bar (which I am pretty sure wasn’t in our version).

You shouldn’t think too hard while watching Harvey. This is pure light entertainment and joyful to watch. For me this was a trip down memory lane that didn’t disappoint.

‘As you go through life you must be ‘oh so smart’ or ‘oh so pleasant’ for years I was smart. I recommend pleasant’. – Elwood P Dowd

We recommend it wholeheartedly. 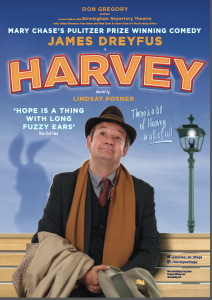 Harvey is playing at the Theatre Royal, Haymarket until 2nd May.