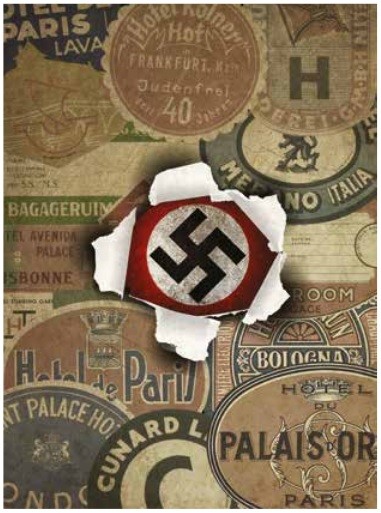 ‘France, 1940. Jacobowsky, a Polish Jewish intellectual, has been one step ahead of the Nazis for years. Stjerbinsky, an aristocratic, anti-Semitic Polish colonel, is desperately trying to get to England. Jacobowsky has purchased a car, but he doesn’t know how to drive. The Colonel knows how to drive, but has no car. When the two meet at a Paris hotel, they agree to join forces in order to escape the approaching Nazis. Together with the Colonel’s girlfriend, Marianne, they begin their perilous journey on the road to freedom.’

Judging by the above description I had no doubt that The Grand Tour which is based on a book by Franz Werfel’s called ‘Jacobowsky and the Colonel’ would make a fascinating play, however it did seem a strange choice to be a musical. But anti-Semitism of course has been covered in various musicals to good effect such as Cabaret and Fiddler on the Roof so I went in with a very open mind. 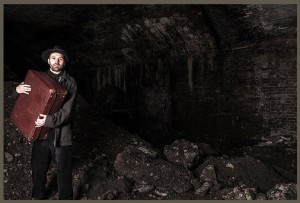 The entire cast of eleven are wonderful! Zoë Doano brings a gentle sweetness to the role of Marianne, meaning it is easily clear why both men adore her! Also, Nic Kyle does equally well as the bigoted Colonel Stjerbinsky, who slowly warms to the eternally optimistic Jewish refugee Jacobowsky played brilliantly by Alastair Brookshaw who lifts the spirits, of not only his travelling companions, but the audience as well.

The rest of the talented cast show their resourcefulness and flexibility when multi-rolling. This ensemble adapt to being circus clowns, nuns, and wedding guests to name just a few. Cressida Carré, the show’s choreographer did absolutely a wonderful job considering the relatively large cast and limited stage space.

The music and lyrics of this show are written by Jerry Herman, and strong similarities can be made with his previous works Mack and Mabel and La Cage Aux Folles. It is a shame that this wonderful score isn’t more well known! I feel several songs in particular would become very popular- songs such as, More and More/Less and Less, One Extraordinary Thing and my personal favourite which opened the show I’ll be here tomorrow (which in truth sounds a little like La Cage’s – “I am what I am”).

One of the things that made this production so memorable for me was the innovative way of using the tiny floorspace of the Finborough theatre. Phil Lindley’s ingenious set design has flaps opening up in the walls and even the floor to reveal all the necessary scenery and props needed.

The cast was great, the songs memorable and the set fantastic. Unfortunately the flaw in this production was the story itself, for instead of concentrating on the relationships between the lead characters and the people they meet on their journey – Michael Stewart and Mark Bramble have tried to add in excessive adventure and exhilarating elements which detract from the focal point and powerful message that the play should convey.

I did briefly wonder, particularly after the rousing circus act one finale, which encourages us all to do ‘One Extraordinary Thing’, whether a bigger and fancier production would have given The Grand Tour more credibility, but upon reflection, I think not. What Producer Danielle Tarento and Director Thom Sutherland have accomplished with this production of ‘The Grand Tour’ is exactly perfect. They have created a beautifully executed gem of a musical which is indeed ‘One Extraordinary Thing’.

Produced by Danielle Tarento and directed by Thom Sutherland, The Grand Tour is playing at Finborough Theatre until Saturday 21st February 2015.