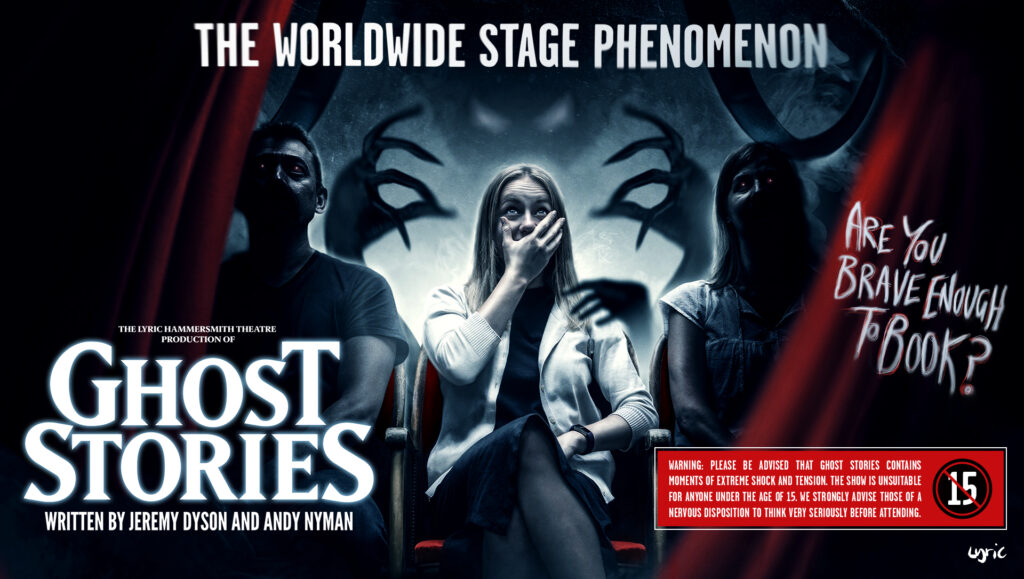 If you think Andy Nyman and Jeremy Dyson’s Ghost Stories is your traditional haunting play with a few scares, think again. Having seen this show at the West End just a few months ago at The Ambassadors Theatre, I was thrilled to learn that it was embarking on a UK tour that includes Brighton’s Theatre Royal… and then chills ran through me just thinking about the unmistakable twisted storytelling that would unfold. It’s a warped sensation, taking pleasure in a show that entices your darkest fears, but the narrative is so sharp, disturbed and intelligent that it is an irresistibly entertaining experience, even if it is a little tainted.

The plot is simple: paranormal non-believer Professor Goodman sets out to disprove the authenticity of three separate ghost stories that have been known to be unexplainable, using logic and reasoning to debunk them. With the fourth wall broken, the
audience becomes a part of the show from the start. They become invested in it, enticed by what these stories are and how he would prove them wrong, whether you’re a believer in ghosts or not. It is his confidence and depth of understanding that give him a Derren Brown-like presence on stage, the delivery reassuring, comical and intelligent. But something’s not right, and as the stories unfold, recurring themes and ideas repeatedly boil to the surface, something that is haunting our narrator, something that begins as a subtle idea and grows into the twisted truth revealed towards the end.

I was so pleased to see two members of the original West End cast during this performance. Joshua Higgott is incredible in the lead role as the Professor, which was originally played by Andy Nyman himself in the stage show, as well as in the recent movie release. Joshua portrays the character perfectly, hauntingly naive to the horrors unfolding around him. Richard Sutton also reprises his role as Mike Priddle who appears towards the end of the narrative, but what a significant part he plays! These two have honed their craft as these characters and it’s hard to imagine anyone else delivering the roles as well as them.

The beauty of this play isn’t just the effective plot and script, it is in everything else that comes with a theatre experience. It is in the darkness that the audience’s minds play tricks, the anticipation that is built from expectation. This story really invests into the psychology of the audience. When you anticipate a scare none arrives, and once you are feeling safe an unexpected surprise shocks you at your most vulnerable. The immersion is set from the moment you step into the theatre. A disturbing soundtrack lingers in the bar area before the show; the lights flicker in the auditorium before the performance has even begun. The production toys with all of the senses – during a scene where clinical bleach is described, the audience can smell it in the air. It is a show built with the audience experience at its heart.

It is simply horrifying. You’ll want to sleep with the lights on, tell your friends about it, and then before you know it you’ll be back in the theatre preparing to watch it all over again.