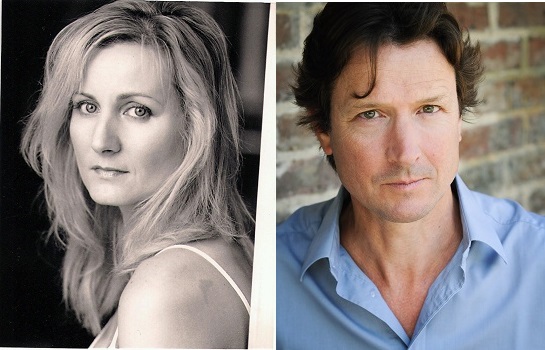 The Ghost Train written by Arnold Ridley is coming to The Capitol Horsham between 18th and 20th May. Husband and Wife team Tom Butcher and Corrinne Wicks are both in the production and took time out of their busy schedule to talk to Sammi O’Neill from Theatre South East.

SON: Tell me a little about the story behind The Ghost Train.

CW: The Ghost Train is the story of six travellers who are stranded at an isolated railway station one night. There is my character, the sulky Mrs Winthrop and my bombastic husband (played by Ben Roddy), we have only been married a year but already things aren’t going to well between us. There is also a recently married couple, an elderly spinster and also Tom’s character Teddy Deacon who is a complete buffoon!
Teddy is not a popular character. During the journey he stuck his head out of the window, lost his hat and so pulled the communication cord, as a result the train stopped and the passengers missed our ongoing connection and are therefore stranded.

The station master played by Jeffrey Holland tells the passengers about a ghost story attached to the station. It turns out that he is too scared to stay overnight there and so for the passengers it is the beginning of a very scary evening.

It is described as a classic comedy thriller. Would that be a good description?

CW: Arnold Ridley wrote The Ghost Train as a straight play in 1925, it was meant to be just a thriller but Ridley was a bit disappointed when some of the audience found it funny.
It is even more amusing nowadays, this is partly because of the language used but also because of the old fashioned attitudes. Today we would call it sexist, the women are pretty useless and easily duped and it is obviously the men that save the day.

It’s Tom’s character that provides most of the humour as does Judy Buxton who is Jeffrey Holland’s actual wife who plays Miss Bourne.

TB: We saw the film version of The Ghost Train on YouTube with comedian Arthur Askey. The film is very different to this play. The story had obviously been adapted to make it a vehicle for Askey to be able to perform some of his comic antics. They had moved a lot of bits around and the character that I play, Teddy Deacon is split into two characters in the film. Arthur Askey played one half of that character and a straight man played the other half.
It seems very bizarre to us, but as a comedy, and vehicle for Arthur Askey it was absolutely perfect.

CW: In essence the story is the same but we were both quite surprised how different the film version was.

How is the tour going so far?

CW: We’ve done 52 performances now so we are just over halfway through the tour. It is going really great.

It has such a great cast, which is just as well as it is such a long till time to be on the road together and there is nothing worse than being on the road with some people you don’t like.

Talking Scarlett is a really nice production company. Both Tom and I have worked with Patric Kearns who is the artistic director of Talking Scarlett a couple times before and one of his strengths is making sure that he is able to pull together a good group of people who can work well with each other.

Does touring alongside your spouse make it easier or harder?

TB: It cuts the costs because we’ve been able to buy a wonderful 2-4-1 railcard!

CW: Yes, highly recommended, we only discovered them recently. You buy one railcard and if you travel together you get a third off! It’s fantastic.

It is fun, we have toured together before. We have a campervan so we are quite used to being cooped up together in a very small space. On this job we are sharing a dressing room as well, so we are together 24/7. After we finish this tour of The Ghost Train, Tom has in fact signed up for a long tour which will take about 7 months which he will be doing without me but I shall get to see him at weekends.

But we are quite used to working together, we actually met while working on the set of Doctors.

Yes I see that Tom has been in a few medical dramas, Doctors, Casualty, Holby City and Peak Practice.

TB: I’m not sure I played doctors in all of those but I do seem to be cast as a professional now because I’ve grown up a bit and I sound like I know what I’m talking about. I have no medical knowledge though – I know where the plasters are kept, but that is about it.

Do you enjoy being on tour or do you long for home sometimes?

TB: It is a bit of both really. It is nice getting around the country and seeing places that you wouldn’t normally have found yourself in. I certainly know England, Scotland and Wales a lot better than I did a few years ago through touring which I think that’s a good thing.

Do you have a new favourite town?

CW: We have both played Eastbourne several times in the past and then on this tour only a couple of weeks ago. Each time we go there we fall in love with it a little bit more.

TB: Basingstoke is quite nice as well, I like the theatres there, The Ghost Train played there in January. Most places of got something going for them. It is a very rare that a place is so ghastly you want to get out of it and I am not going to mention which they are 

Next week we are having a split week and going to Hastings and Portsmouth! Neither of us have been to Hastings before. We are there over the bank holiday and there is a Morris Dancing Festival and a biker’s convention both running so that should be fun. I think that they are both secretly into what each other do!

One final question, do you have any train stories to tell us?

TB: Funny you should ask that! I was talking to a group of train spotters the other day and they told me that they were having this rather morbid conversation about how they’d like to ‘go’. One of them remarked that if it was a big surprise then he actually wouldn’t mind being run down by a steam train, that would be his choice. His mates organised it for him and he was chuffed to bits.

The Ghost Train will play at the Capitol Horsham between Monday 18th – Wednesday 20th May.