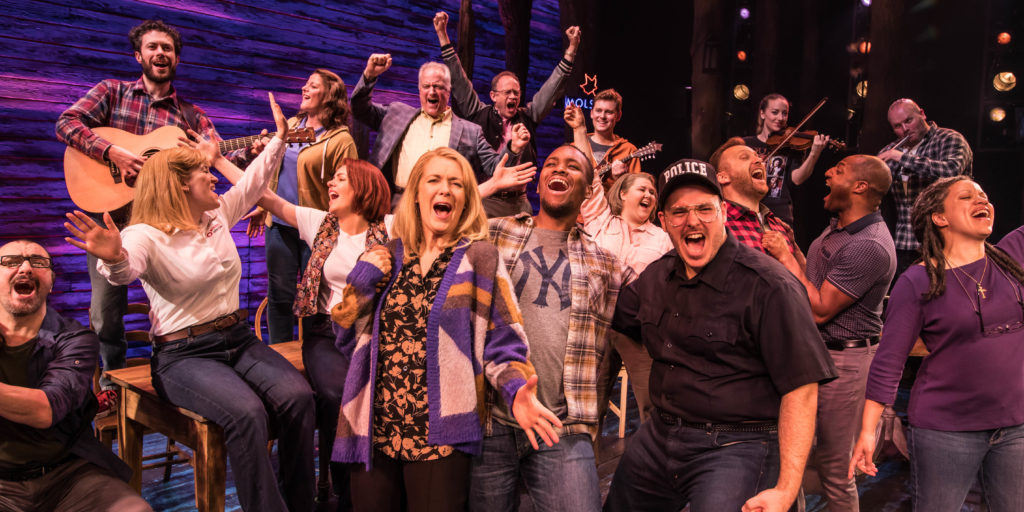 Come From Away | Review

I am never late to the theatre, always arriving in plenty of time to soak up the atmosphere. The night I went to see ‘Come From Away’ everything seemed to go wrong. First, there were signalling issues on the train, then we boarded a bus which ground to a halt due to an incident, we had to get off and peg it to the nearest tube (I don’t peg anywhere). We were literally the last people to get to our seats before the show started. I was very stressed and not a happy bunny.

Turns out my journey was a piece of cake and less than two hours later I was counting my blessings and my outlook was decidedly positive.

Basing a musical on true events caused by the atrocities of 9/11 on the surface doesn’t sound ‘entertaining’, however, this is a truly remarkable story of a community working together to extend the gift of love, friendship and practical help to strangers who had ‘Come from Away’.

On September 11th 2001, immediately following the terror attacks in New York and in Washington, airspace over the US closed. Nothing took off and nothing could land for fear of further attacks. Airborne international flights were diverted and had to land elsewhere. Thirty eight planes carrying nearly 7,000 passengers from all over the world of every religion, colour and kind landed on a small island in Newfoundland, Canada. The passengers weren’t told why they had landed in this remote spot or why they were then kept on the planes for 28 hours, this was the days before mobile phones and information was scarce rendering them, terrified, angry, confused and far away from home and family.

Meanwhile, despite the passengers almost doubling the entire population of the island, the ‘islanders’, needing to ‘do’ something after the horrific news, rallied round and put all their efforts into finding places for the passengers to stay and ways to feed and clothe them. When the strangers were finally released from the plane, there was a warm generous welcome waiting for them which lasted for 6 days until airspace was reopened.

7000 people had 7000 reasons why they were on an aeroplane, 7000 reasons for wanting to be home, 7000 stories to tell. With so many threads it is amazing that just 12 amazingly versatile actors (plus support) each playing both islanders and multiple passengers convey these stories with absolute clarity. With slight costume changes and changes of accent, nuances and not once was the storyline confusing.

As there are no stand out stories, all important in their own right, there are also no stand out actors, the company work together as a true ensemble, like a finely tuned machine (just like the ‘real’ islanders). Voices are incredible and the characters personable with not a weak link.

Come from Away is such a powerful story it would have worked as a play, however, music and lyrics by creators Irene Sankoff and David Hein enhance the story further. Again, distinct lines are drawn between ‘island’ music with its Irish heritage and rhythm and the songs by the passengers which have a much more contemporary feel.

Beowulf Boritt’s staging is perfectly understated, using no gimmicks thus not detracting from the storylines. Simple mismatched chairs and tables are used ingeniously to great effect creating various scenes both on board planes and on the island.

Surprisingly the musical is just one act long. This works well, to split the show into two and spoil the momentum would be a mistake. The show flows effortlessly and the only fault is I didn’t want it to end. Moreover, I would have watched it all over again after an interval so that I could appreciate it once more.

Come from Away is uplifting, optimistic and utterly captivating. Central to the show remains the importance of the people. A marvellous tribute to those thrown together by turmoil yet able to unravel the chaos and work together.

Truly, everyone needs to see this show.

Come from Away
Phoenix Theatre