When aspiring thespian Frederick Clegg first lays eyes on Miranda, the talented art student who comes into the job centre where he works, to sign on, he knows that she is the only girl in the world for him. However, rather than following the traditional pathway of courtship and, say, asking her out for a drink, he decides to imprison her in the basement of his secluded country manor, purchased with the winnings of his lottery ticket. 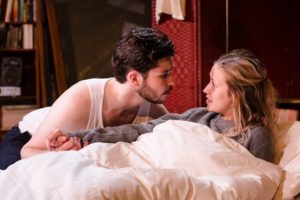 What ensues, in Mark Healy’s adaptation of John Fowles classic 1963 novel, feels more like the precept for a dark comedy house-share, than a chilling thriller. Daniel Portman’s (Game of Thrones’ Podrick Payne) hand-wringing Clegg brings is decidedly un-threatening and very rarely feels like an actual predator. Lily Loveless (star of Skins) is endearing as the captive heroine who tries to reason Clegg out of his obsession with her. 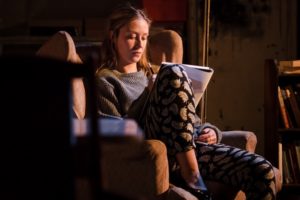 What Healy’s production sacrifices in thrill-factor, it makes up for in warmth and social commentary – the play at times feels more like a social satire than a classic Bluebeard tale. Class boundaries strain as Frederick struggles with himself, and Miranda attempts to cure Frederick of his idolization of her, and the world which she inhabits.

All in all, The Collector is an enjoyably disturbing watch, peppered with dark humour and occasional moments of poignancy. Host to Alice’s Adventures Underground, The Vaults theatre provides the perfect setting for this sensitive adaptation of John Fowles’ classic novel.