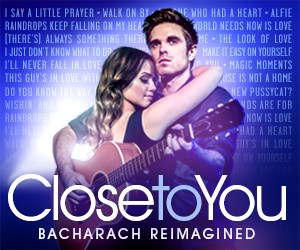 Have you ever sat in a huge theatre wondering what it would be like to be on the stage with the cast looking out at a sea of faces? On Thursday I got the opportunity, thankfully not as an artist, the audience were spared that, I was one of the lucky 22 people with an onstage seat for the opening night of London’s newest show ‘Close To You – Bacharach Reimagined’ at the Criterion Theatre in Piccadilly Circus.

The stage is very cosy, with chairs, comfy sofas, subtle lighting and dozens of guitars spewing up the wall in a Les Misérables barricade type fashion. As we were seated members of the cast were already hanging around the stage (in some cases literally) and it gave the feel of a welcoming bohemian hangout.

Close to You features songs by legendary songwriter Burt Bacharach. Every song is warmly familiar, ‘Raindrops keep falling on my head’, ‘I’ll never fall in love again’ and ‘Anyone who had a heart’, the list goes on and on. But all these iconic numbers have indeed, been ‘reimagined’, co-conceiver, musical director and total hunk Kyle Riabko has taken these already magical songs, given them new arrangements mixed them up and mashed them together. The tunes and the lyrics remain respectable to the originals but are stylishly modernised and given new life, and the result is lovely. 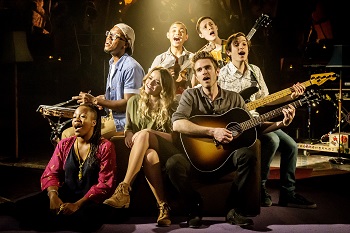 At times Close to You reminded me a little of ONCE which is not surprising as it shares the same director Stephen Hoggett, yet Close to You is not theatre, but a perfectly orchestrated and devised concert. Riabko confidently takes the lead and accompanied by a further six beautifully sounding vocalists/musicians perform familiar tunes reinvented in a whole new way.

Close to you was originally performed at the Menier Chocolate Factory and being up on the stage with the cast it easy to imagine being in that intimate space. I was glad I was seated there, and got more of an ‘experience’.

On opening night, Burt Bacharach himself attended, after the show he joined the cast outside the theatre on Piccadilly Circus and played ‘Raindrops Keep Falling On My Head’ while the cast sang to the crowds. It was a ‘magic moment’.

Close to You runs at the Criterion Theatre until 10th January

One thought on “Close to You | Criterion Theatre | Review”