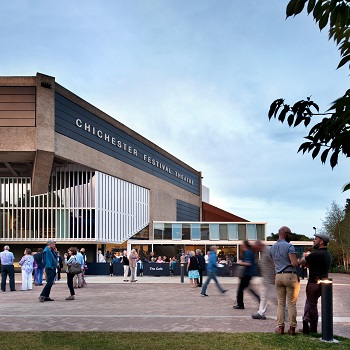 Penelope Keith returns in the world premiere of ‘Mrs Pat’ from 15 October – 7 November. This one-woman play about the celebrated 19th and 20th century actress Mrs Patrick Campbell is written by Anton Burge and directed by Alan Strachan. This production reunites the actress and director who worked together on Festival 2006’s Entertaining Angels.

Also receiving its world premiere is Walter & Lenny, which documents the delightful friendship between composer and conductor Leonard Bernstein and the Dean of Chichester Cathedral, Walter Hussey. Their collaboration led to the composition of The Chichester Psalms, a choral work performed at the Cathedral in 1965. Devised by Peter McEnery and directed by Julia St John, this new production marks the 50th anniversary of the Cathedral performance. The play runs from 11 – 14 November.

As well as brand-new work, the drama offerings also include the 60th anniversary production of a classic thriller, Agatha Christie’s The Mousetrap from 23 – 28 November. The setting is a country house cut off by snow where a group of people discover there is a murderer in their midst.

The Olivier award-winning drama King Charles III runs from 30 November – 5 December, following acclaimed seasons at the Almeida Theatre and in the West End. This provocative exploration of power, democracy and the conscience of Britain’s most famous family is by Mike Bartlett, directed by Rupert Goold with Whitney Mosery. The cast features Robert Powell as King Charles III.

Also exploring the enduring fascination with royalty (and Russian spies) is an award-winning double bill by Alan Bennett. Single Spies chronicles the lives of Guy Burgess and Anthony Blunt, two of the ‘Cambridge Five’ spy ring in the 1950s. Following the success of The King’s Speech, Chichester Festival Theatre and Birmingham Repertory Theatre collaborate again for this co-production, directed by Olivier-nominated Rachel Kavanaugh, which runs from
4 – 13 February.

Chichester’s ongoing commitment to staging high quality work especially for children and young people is a key aspect of this season. Following its highly acclaimed promenade production of Running Wild this summer, the Youth Theatre returns to the Festival Theatre stage with a revival of its much-loved production of A Christmas Carol from 18 December – 2 January, adapted by Bryony Lavery and directed by Dale Rooks and Jake Smith.

Hetty Feather is an enchanting story about a young girl’s adventures following her escape from a Victorian Foundling Hospital. Based on a novel by Jacqueline Wilson, adapted for the stage by Emma Reeves and directed by Sally Cookson, this production uses songs, live music and circus skills to glorious effect and runs from 27 – 31 January.

Thrills are also on offer from Dinosaur Zoo which brings an array of prehistoric creatures to life ranging from cute baby dinos to ravenous reptiles. This interactive show for all the family includes a 15-minute ‘meat and greet’ with the dinosaurs! Ages 3+. The show runs from 16 – 20 February.

Moscow City Ballet – one of Russia’s most successful touring companies – returns to herald the New Year with two classic productions accompanied by a live orchestra from 5 – 10 January. Swan Lake is the powerful story of a tragic love affair, performed to Tchaikovsky’s evocative score, coupled with The Sleeping Beauty’s magical characters and opulent costumes.

The dark art of juggling will be unleashed by Gandini, making their Chichester debut on 20 January with an unforgettable mix of circus, dance and theatre. They have been at the forefront of contemporary performance for over 20 years, and have performed in over 40 countries. Their mesmerising juggling show Smashed is inspired by the work of modern dancer, choreographer and director Pina Bausch.

Comedy lovers can enjoy two singular performers with highly distinctive styles. Having entertained audiences for over 40 years, Pam Ayres returns on 14 February with her wry and gently humorous look at the detail of everyday life, following her latest book,You Made Me Late Again!

Stewart Lee has also won critical acclaim and a devoted following, thanks to his unique deconstruction of his own comedy routines. He brings his new live show A Room With A Stew to Chichester on 20 February with fresh material, in advance of his next BBC2 series of Stewart Lee’s Comedy Vehicle. Age guidance 14+.

There’s music for lovers of all genres ranging from iconic pop to classical concerts.  Joan Armatrading plays a solo gig on 20 November as part of her final major world tour. It’s the chance to experience a live performance of career defining songs such as Love And Affection, Me Myself I and Willow.

As part of a long-established tradition in Chichester, the Christmas Concerts will return to the Festival Theatre from 7 – 12 December offering a festive mix of carols old and new alongside readings, anecdotes and poems.

The BBC Concert Orchestra returns to its regional home at Chichester for two dates. The Orchestra joins forces with award-winning folk duo Nancy Kerr and James Fagan to reinterpret traditional material on 18 November. This will be followed by a celebration of musical productions at Chichester Festival Theatre including hit songs from The Music Man, Kiss Me, Kate and Sweeney Todd on 22 January, conducted by Keith Lockhart and presented by Ken Bruce for a live Radio 2 broadcast.

There will also be musical offerings from The Band and Bugles of The Rifles whose concert will feature some of Britian’s best loved pieces such as Nimrod and Land of Hope and Glory on 21 November, and Southern Pro Musica’s popular Children’s Concert which includes musical classics and audience participation compered by magician-extraordinaire Neil Henry and conducted by Jonathan Willcocks on 19 January.

HMS Pinafore In Concert conducted by Martin Handley features a cast of the country’s finest G&S singers and an orchestra on 21 January, while one of the world’s most famous brass bands, the Black Dyke Band performs well known classical pieces, military marches and film music on 23 January, and Spotlight On the Edge, a charity concert in support of Children on the Edge will be an evening of music, song and dance on 24 January.

16 – 25s Ticket Scheme
An allocation of tickets priced at just £8.50 are available for 16 to 25 year olds for most plays in the Festival Theatre. These will be available one month before each production opens. cft.org.uk/850