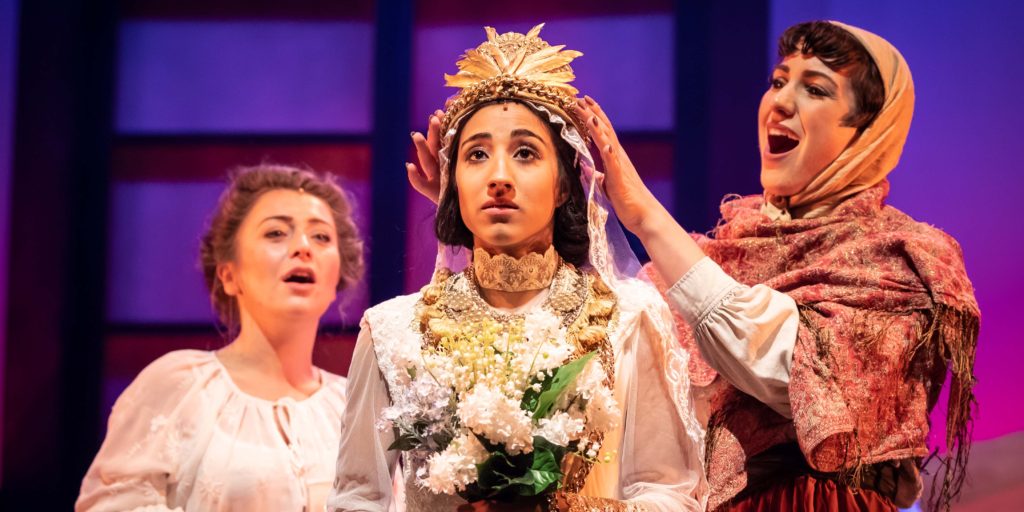 The musical opens with our introduction to the stunningly composed score that resonates throughout the whole show, some notable songs being ‘Selma’, ‘I Know Now’ and ‘Heart of The Earth’. The show then opens with the narration by Kahlil Gibran (Nadim Naaman) as a 40-year-old, detailing his life up until that current point in time. Gradually, we are introduced to Gibran as an 18-year-old (Rob Houchen) returning to Lebanon from America, where he meets his first love Selma Karamy (Nikita Johal) as they embark on a journey of discovery, love and loss.

Co-writer Nadim Naaman heads the cast in the role of Kahlil Gibran, acting as the show’s narrator. Previously seen at the Haymarket’s neighbouring theatre as Raoul in Phantom of The Opera, Naaman has created an enchanting narrative role both through his performance and co-writing of the show that enrichens each scene with depth and meaning. Nikita Johal stepped into the role of Selma Karamy with little over a week until opening night when Hiba Elchikhe had to withdraw from the show due to personal reasons. Johal flourished in the role bringing bravery and passion to the character that Gibran would have envisioned, particularly in her performance of ‘Til Death Reunites Us alongside Rob Houchen in the role of Young Gibran. Houchen captured the audience with his touching and endearing take on the new role – carried by the narration he gradually unlocks his character’s passions through his enchanting performance of the score, igniting a connection with every member of the cast.

The set was simple yet effective, due to the successful implementation of the narration there seemed to be little need for an elaborate set as this would have drawn away from the story unfolding. Therefore, the idea of having the set changing in sequence with the narration made the whole show flow incredibly well.

It should also be noted that the programmes for Broken Wings will be complementary to each member of the audience throughout the run – perhaps this is something that can lead by example and encourage new or even current West-End and Off West-End shows to introduce.