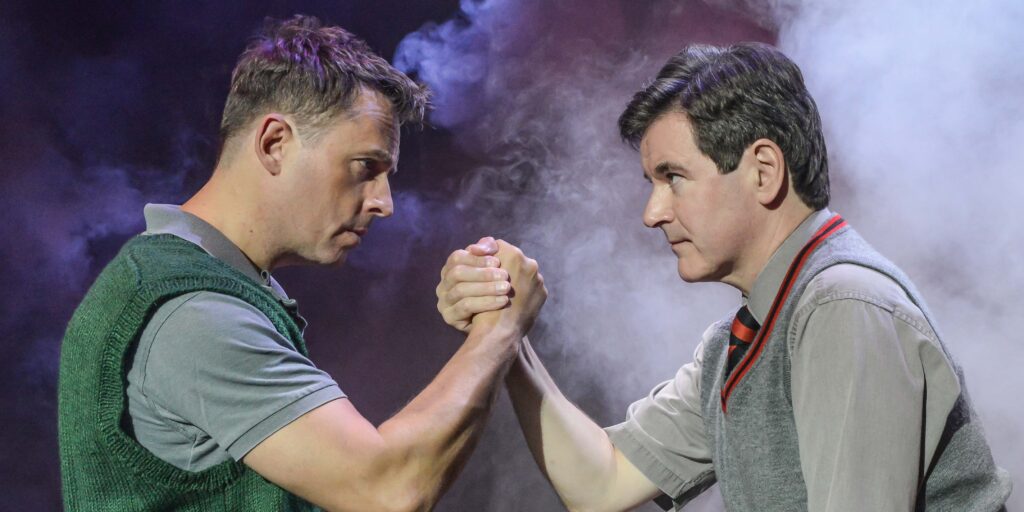 Is there any theatregoer who hasn’t seen Blood Brothers, I wonder. With over 10,000 West End performances behind it, productions around the world and a UK tour that seemingly runs in perpetuity, Willy Russell’s masterpiece is one of the most celebrated British musicals of all time.


Confessions on the table here; this was my sixth visit spread over more years that I care to remember.

With a work so familiar, the challenge must be to keep it fresh without daring to tinker with  the excellent story and terrific score.

And I’m happy to say in the hands of the wonderful company making up the current touring production, the show is still in fine fettle. Co-directors Bob Tomson and Bill Kenwright wisely adopting the if-it-aint-broke . . . philosophy.

For those who don’t know the story; poor single mum Mrs Johnstone (the excellent Niki Evans) is persuaded to give up one of her newly born twin boys to her well-to-do but barren employer Mrs Lyons (Paula Tappenden) — a deception that will be known only to them. But a superstition that twins unknowingly separated at birth will face a terrible fate if they ever meet hangs over the arrangement.

With adults playing children growing into adults the cast are required to make the arc from knockabout comedy to heart-wrenching drama and it’s carried off here with aplomb.

The two boys into men are played by Sean Jones as the poor Mickey (bowing out with this tour having played the part for around 20 years) and Joel Benedict as his “posh” brother Eddie. While Jones probably has more to work with in the role of Mickey, both actors were excellent and it makes for some terrific comedy moments.

I’ve always felt that Russell’s theatrical masterstroke in Blood Brothers is to have a Narrator who stalks that stage like an ominous one-man Greek chorus and Robbie Scotcher brings a visceral intensity to the role here.

Another standout for me was Carly Burns as Linda, the love of Mickey’s life who ultimately finds herself stranded between to the two men. You just wanted to cuddle her.

Away from the principals, the company play multiple roles seamlessly and the whole thing is really rather wonderful.