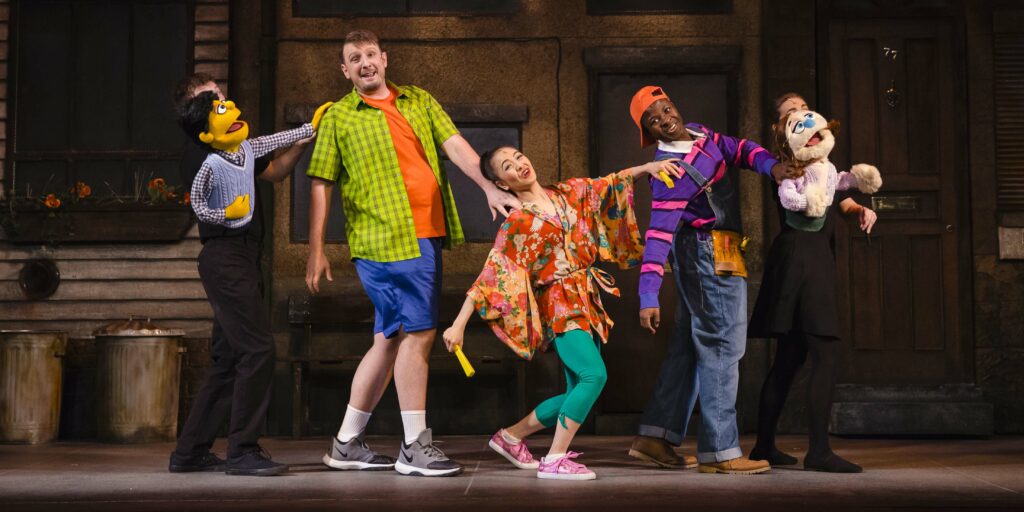 When I first visited Avenue Q in 2015, I saw my life flashing before my eyes in the furry form of a puppet. Having just graduated, I too, like our protagonist Princeton, was asking myself… what do you do with a BA in English?

Avenue Q is the fur-iously funny story about a fresh-faced kid just out of college, moving into a new neighbourhood that’s not quite as fancy as Avenue A, trying to figure out what to do with his life as an official grown-up.

Along the way, he meets the whole gang; a heap of friendly figures that are just as fuzzy as your neighbourhood Sesame Street characters… except they’re much naughtier than our child-friendly counterparts. Characters such as Rod and Nicky are similar to Bert and Ernie and Trekkie Monster… well, he’s like Cookie Monster with an insatiable appetite for something other than cookies! Princeton experiences love with Kate Monster, temptation (in the form of two very cute ‘Bad Idea Bears’), boozy nights, heartbreak and so much more.

What makes this production so intelligent, is that it uses these friendly puppet characters to deal with some really grown-up subjects. They pull the wool over your eyes if you will, by tackling politics, homosexuality, racism and relationships, through the use of musical numbers and fluffy characters. By doing so, they reflect interesting ideas about these topics, but in a fun light-hearted way that makes it even more punchy.

The entire cast were fantastic, in particular, Cecily Redman (Kate Monster/Lucy The Slut) whose vocals were flawless. If you’re a fan of the muppets, musicals, or are still trying to figure out your way in life, then this show has been made for you.

The fact that Jim Henson’s daughter and widow, who were still running the Jim Henson company at the time, saw the original production and loved it, shows you the quality of the show. It is a celebration of puppetry and of life, and is the ultimate homage to many of our favourite muppet characters.