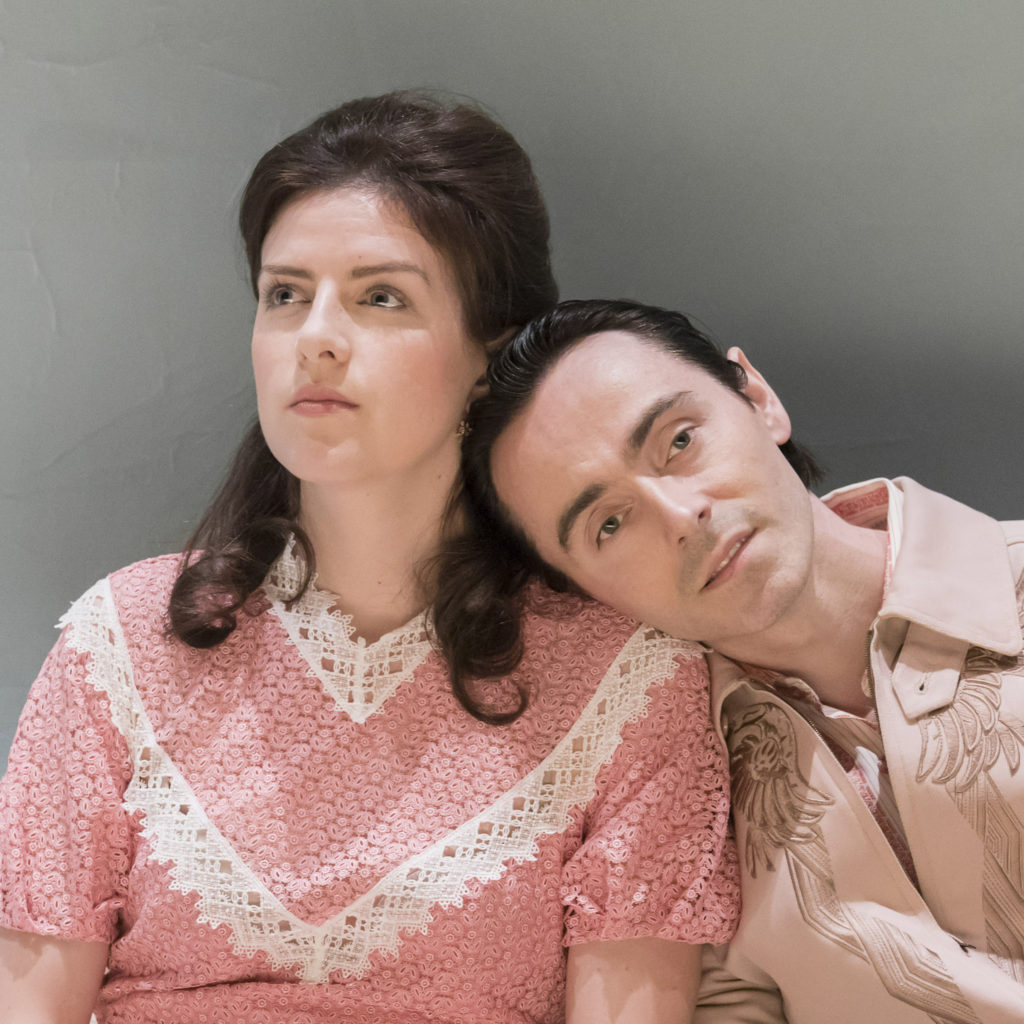 The audience walks into an empty box, open for the audience to see, with ledges around each corner, and a large over imposing doll house situated in the middle of the stage. This, as we learn in the opening moments is Ballybeg Hall, an ageing country ‘Big House’ run into disrepair – and this is Aristocrats. Penned by Brian Friel (better known as the Irish Chekov), it is perhaps one of his lesser-known plays, telling the story of O’Donnell children, who return to their ancestral home for the wedding of Claire, the youngest sister. Like all classic Friel plays, there are secrets, an absent family member and more than a little dysfunction. But I promise you, it’s far more fun than that.

Each sibling is beautifully brought to life through the performance; central to this is Casimir (David Dawson) the fantasist brother who can’t quite seem to get a grip on reality. He makes phone calls to a wife in Germany who we never see, and who the rest of the family think is made up, he confuses visitors to the Hall, declaring how Yeats had such cold eyes, even though Yeats died the year Casimir was born, and he jumps each time the voice of Judge O’Donnell crackles over the baby monitor. Pitifully jumpy and nervous, Dawson brings comedy, as well as a certain vulnerability, to the role of the oddball of the family – in one crushing moment, he explains how his father had told him at nine years old, if he had been born out of the family, he would have been the “village idiot”. It is a poignant moment, but never overplayed, suggesting a lingering despair that goes deep. Claire (Aisling Loftus) is the baby of the family, vulnerable and quite possibly bi-polar, Claire had the chance to be a concert pianist, a dream that was crushed by her father and is on the brink of marrying a man she clearly does not love. Tripping that careful line between waifish and weak, Loftus brings a strength to the role which is needed, and her chemistry with Dawson sparkles as the two siblings who clearly rely on each other more than they know. Alice (Elaine Cassidy) is the black sheep of the family, an alcoholic with a narcissism issue, the world revolves around Alice and she knows it. It would be all too easy for Cassidy to slide into a wholly unsympathetic performance, and there is something deeply affecting about her performance when the mask does start to slip, particularly in the second half of the play. Finally, there is Judith (Eileen Walsh), the sister who was left behind to look after their father and the hall, and who carries the burden of the entire family. Walsh gives the role a maternal touch which could make her distant to the audience, particularly given her reduced stage time compared to the other cast, but it is hard not to be affected when Judith talks of her life as a routine that she does not complain about, but does not give her pleasure – particularly in relation to caring for her ailing father.

Around them is Willie (David Ganly) the kindly man who looks after the land along with Judith. Ganly brings some much needed light humour to the play, which at times can get bogged down in its dark jokes. He is joined by Alice’s husband, Eamon (Emmett Kirwan), a skulking, menacing figure of a man who is not afraid to raise a hand to his wife, and who quietly winds up each person in turn as he wants to. It’s hard to get a handle on Eamon, something which Kirwan handles admirably, as he moves from each person, slowly turning the knife, but displaying a deep love for the power structures that run deep (also a lovely singing voice). Finally, we have Tom Hoffnung (Paul Higgins), an American academic, chronicling the stories of the Hall. It’s a bit of a duff role, a clear theatrical device to give him a reason to be in the play, but Higgin’s plays the outsider admirably, even if his character is never really fleshed out like the other characters.

Indeed, all of the performances are more than admirable, they are the reason to come and see this play, because whilst the performances are beautifully nuanced and understated, it’s in the execution of the direction where the plays sometimes falters and fails to reach the levels it clearly wishes to. There is something very theatrical and non-naturalistic about the staging and direction; which strikes me as odd, given the fact that Friel is known for his naturalism. Over a tannoy, stage directions are read out, actors sit on the back of the wall constantly, waiting to be called into action, the ailing father reaches out to his children through a baby monitor, casting a long shadow, there is an absent sibling whose voice brings about the events of the second act, but who is never mentioned again, and there is something very…static about the whole thing. There are moments of fluidity, and the second act is much improved on the first, but the decision to include an invisible game of croquet baffled both me and some of the other audience members. Which is not to say the staging (Es Devlin), is not well designed, because it is. The open space, the gentle lighting and the presence of the dollhouse work well, but I found that having Uncle George (Ciaran McIntyre) slowly peeling away the wallpaper to reveal a fresco underneath to be both unnecessary and a bit distracting.

Which is not to say that Aristocrats is a bad performance one bit, for the performances are wonderful, and there is humour laced throughout (even if it is very dark and very Irish), but I just wished that perhaps some of the more theatrical devices could have been stripped away, allowing for more moments of humanity, and the beating emotional heart underneath the play, to really come to life.

Aristocrats is currently playing at The Donmar Warehouse until 22nd September. To find out more or to book tickets visit: https://www.donmarwarehouse.com/production/6568/aristocrats/