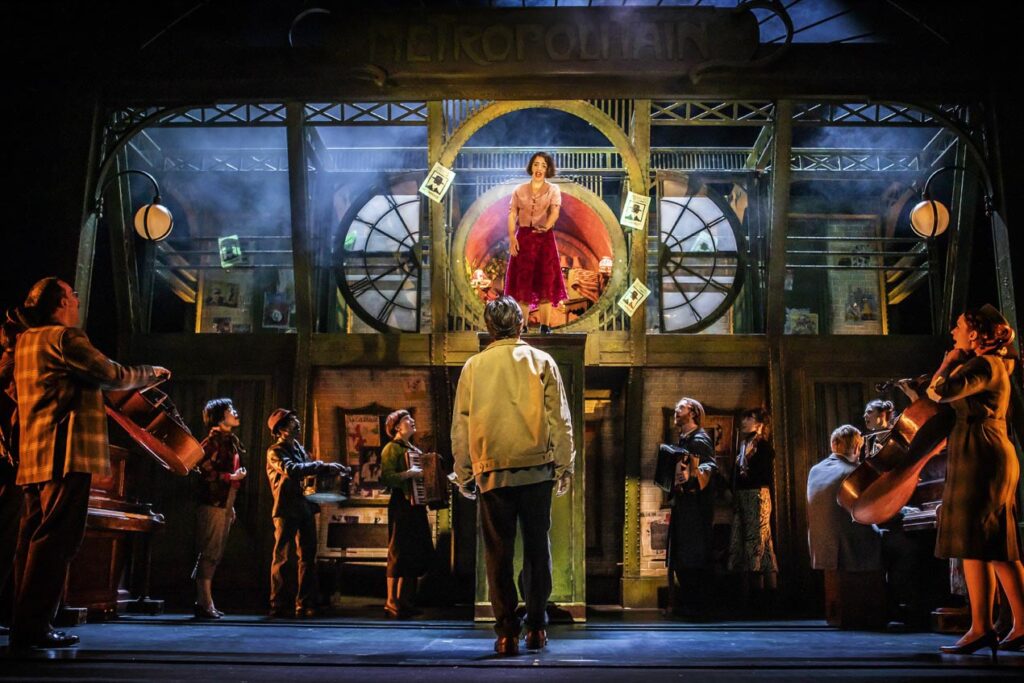 The 2001 Oscar-nominated French movie Amelie has been adapted into a stage musical and is currently on a nationwide tour, this week calling at the beautiful Devonshire Park Theatre in Eastbourne, before having a short season in London at ‘The Other Palace’ over From November to February.

The protagonist Amelie is a shy young lady who struggles in company. Initially home-schooled up by neurotic parents who closeted her due to a supposed weak heart she now works in a café in Paris surrounded by colourful and quirky characters whom she watches from afar. In her flat one day she stumbles on an old tin box full of childhood belongings and she decides to find its rightful owner and secretly return it. This she does and seeing the positive impact her good deed has made she embarks on a quest to secretly help and solve the problems of those around her.

Amelie is played by French Canadian actress Audrey Brisson who is strong and powerful both vocally and physically. Bisson’s portrayal of this whimsical character is sublime, she portrays Amelie as a complex character who longs for acceptance but is unable to break free from her isolation.

Strictly Come Dancing finalist, Danny Mac plays love interest Nino who spends his days collecting discarded photos and piecing them together. Amelie is fascinated by Nino and struggling with her emotions and unable to communicate with him lays a trail of ingenious clues to her whereabouts.

The rest of the cast play a multitude of characters that weave a fascinating story of life in Paris, September 1997. All being accomplished musicians, music is played onstage as the actors dance, sing and play simultaneously. The songs written by Daniel Messe with additional lyrics by Nathan Tysen have an essence of Sondheim in them as they tell intricate stories and you hang on every word.

Often a show is defined by the quality of the actors but in Amelie the Musical’s case, Madeleine Girling’s set design is breathtaking and an integral part of the show. Props and scenery are used in ingenious ways, pianos turn onto shops and the photo booth is continuously used in a variety of forms, including as a confessional. Amelie’s flat is located on a second level to the set which she enters by being hoisted up on a lampshade.

The gifts keep on coming, sparked by Amelie’s imagination the musical laps in the surreal sometimes with giant figs, singing fish and dancing gnomes seeming normal in Amelie’s world. A favourite element of mine was Dik Downey’s puppets that enhanced the show even further particularly the beautiful puppet of Amelie of a child that was believably heartbreaking.

Amelie the Musical is a deliciously sophisticated production oozing with Parisian charm. The cast are superb, the songs, although not memorable weave an intricate and captivating story and it simply looks divine. Highly recommended.