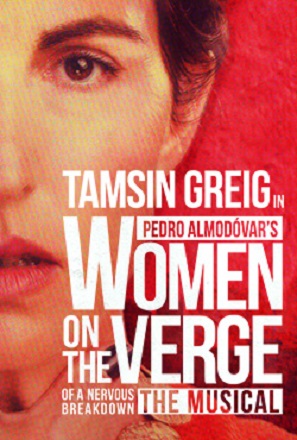 Women on the Verge of a Nervous Breakdown – Playhouse Theatre

This Review was originally posted on www.LastMinuteTheatreTickets.com. 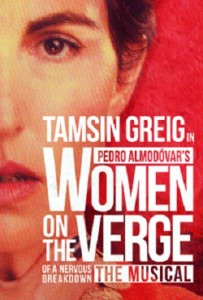 Based on a film by Spanish writer Pedro Almodóvar, Women on the Verge of a Nervous Breakdown sounds bizarre as a subject for a musical. It premiered on Broadway to mixed reviews but has now been re-written and turned into a sleek stylish production directed by Bartlett Sher now playing at the Playhouse Theatre.

Set in Madrid in the 80s, the show centres on a group of women. Pepa (Tamsin Greig) is the central character who has been jilted by Ivan, her lover (Jérôme Pradon) and is desperate to contact him. Ivan seems to have lasting attraction, as his ex-wife of 19 years Lucia is also on his trail. Lucia (Haydn Gwynne) is hilariously neurotic and quite frankly mad as a box of frogs. There is also Pepa’s best friend Candela a suicidal model (Anna Skellern) who finds out she has been dating a terrorist!

Amongst the supporting cast are Ivan and Lucia’s son Carlos (Haydn Oakley) and his fiancée (Seline Hizli) who are planning their wedding and apartment searching and Lucia’s lawyer is played by non-other than Willemijn Verkaik (Wicked) the biggest surprise of the evening being that she didn’t get her own song.

Ricardo Alfonso sets the scene from the onset by serenading the audience and continues to subtly and skilfully narrate throughout the show in various guises, including the friendliest Spanish taxi driver ever to exist!

Tamsin Greig is exemplary as Pepa, she draws on her experience and gives Pepa a mix of frailty and yet underlying courage that women relate to as she struggles to ameliorate her situation. In this her musical theatre debut, she also adds yet another string to her bow as she proves that although she will never be remembered for her singing voice she can ably carry a tune.

The stylish set designed by Anthony Ward is extremely effective, a modern white two storey apartment which has furniture and props smoothly being wheeled in and out to transforming it effortlessly into other locations.

David Yazbek (Music and Lyrics) and Jeffrey Lane (Book) collaborate once again and create something completely different to their previous show Dirty Rotten Scoundrels. Although the songs in this show are not as memorable, together with Ellen Kane’s choreography most of the songs give a subtle Spanish Latino flavour to the show which is enchanting.

Directed by Bartlett Sher, Women on the Verge of a Nervous Breakdown is farcical with hilarious throw-away lines yet at other times can be poignant and tender. As the story unfolds, we wonder with Pepa if the situation could get any worse and of course it does. The Act One Finale ‘On the Verge’ sees the women at breaking point and although it briefly loses a bit of momentum in the second act at the end there is the sweet realisation that they are in control of their own fate and women are stronger that at first seem.

I thank Last Minute Theatre Tickets for the opportunity of seeing this show.