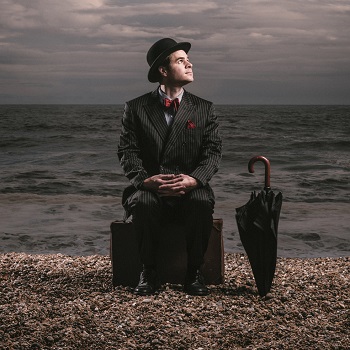 Travels with my Aunt | Review

Graham Greene’s novel ‘Travels with my Aunt’ written in 1969 is regarded as a modern literary classic. Three years after it was written a loose adaptation of the book was filmed starring Dame Maggie Smith but it wasn’t until 1989 that Giles Havergal adapted it for the stage. Since then it has been performed in the West End, on Broadway and now production company Creative Cow is taking Travels with my Aunt on a tour across the UK, opening last night at the Devonshire Park Theatre in Eastbourne. 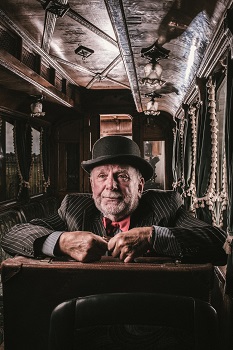 Travels with my Aunt is a journey of self discovery for retired bank manager Henry Pullings, who first meets his elderly Aunt Augusta at his mother’s funeral and his world is turned upside down when she tells him the truth about his parents before whisking him away on exotic and exciting adventures away from his quiet orderly life and across several continents, meeting a range of interesting characters and opening his mind to the idea that there is more to life than the dahlias in his garden.

The beauty of Giles Havergal’s adaptation is the 22 characters in this play (13 male and 9 female) which include a ‘negro’ fortune teller, an Italian Nazi collaborator and an American pot-smoking hippy can be performed by 22 actors or as few as only 4 and is not gender specific.

Creative Cow have ambitiously produced the completely stripped back version, with only four actors (in this case 3 male, 1 female), a simple set and no costume changes at all.

Each of the actors play both Henry Pulling and Aunt Augusta as well as three or four other roles; switching character by cleverly donning a hat or in the case of Aunt Augusta holding a pair of pink spectacles. They share the stage at all times, often playing either Henry or his Aunt simultaneously by sharing the lines between them.

It starts well and is a fascinating concept and despite sounding complicated it is not difficult to follow. The actors are always on the move and are adept at keeping all their personas separate by using clever body language and accents. However the concept wears thin after the first half hour and although the narrative is rich and a pleasure to listen to, the colour and vibrancy of the original story is lost and therefore the production gets a bit tedious. 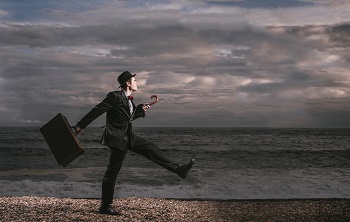 As a comedy it is mildly amusing and the cast raise a few laughs with their interchanging characters, Jack Hulland’s, Aunt Augusta was a particular highlight. Clever direction from Amanda Knott means that movements are choreographed to perfection and even when  4 actors are playing the same character at the same time it doesn’t get confusing.

An interesting version of a definitive book but producing the play in this way, focusing on one gimmick and talented acting wasn’t enough and unfortunately there is very little else to brighten it up. The production also suffers by being too long which is probably why it was reduced to a 50-minute show, one act version when it was performed at the Menier Chocolate Factory back in 2013.

I commend Creative Cow for this well structed and well acted play, but unfortunately for me it needed a bit more to keep my attention.

Travels with my Aunt is being performed at the Devonshire Park Theatre in Eastbourne until Saturday 26th March and then will play at the following venues.

One thought on “Travels with my Aunt | Tour | Review”