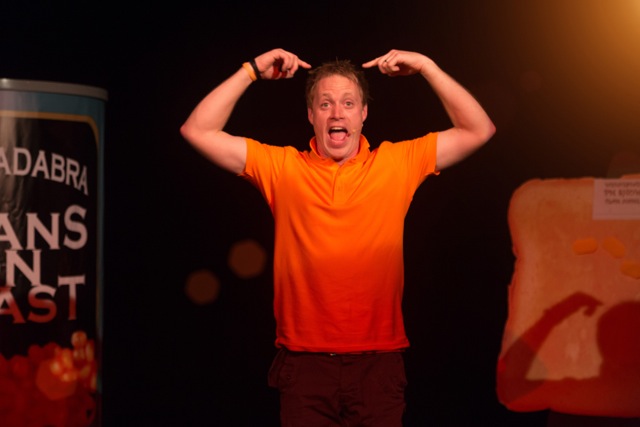 Tomfoolery, Beans on Toast Tour will be playing at Chequer Mead, East Grinstead this Fri 20th February. A fun packed half term treat for the family. I talked to Tom Hunter AKA Tomfoolery about the show and what it is like to be a children’s entertainer.

What made you want to become a children’s entertainer?

I fell into this purely by accident. I started working in holiday club entertainment with Thomson Holidays in Ibiza when I was 18 and it was there I learned a lot of the ropes. I really enjoyed it, so when I came back I started doing mobile discos for 18th birthdays, family parties and weddings etc. One day someone simply asked if I would do a disco for a child’s party and of course you do one and then someone else asks you to do another. At first I was terrified and I couldn’t get out quick enough but then you start enjoying it. It started of as a kid’s disco then I ended up doing a bit of magic and bits and pieces and then things spiralled and went uphill from there.

I started the act about 12 years ago and started making a living from it 8 years ago. Last Easter I gave up my day job as a fire-fighter with West Sussex Fire and Rescue working in their education department to concentrate on Tomfoolery and haven’t looked back. It is Tomfoolery all the way now.

Tell me about Tomfoolery.

I mainly do children’s parties. I have parties four, five sometimes six times a week. I obviously work over the weekends and sometimes after school on a Thursday or Friday. I also do extra parties on a Tuesday which I call my Charity Tuesday where I donate my fee to Chestnut Tree House Children’s Hospice in Arundel.

It is a two hour package aimed at usually 4-7 year olds, I do school disco as well which are popular at the end of term and shows for nurseries but birthday parties are my bread and butter. Now I am doing theatre shows as well.

Tell me more about Charity Tuesday.

Due to a family incident last year we were in the unfortunate position to need the wonderful volunteers down at the St. Barnabas Hospice. I admire hospice volunteers for all of the help that they give. I don’t have an awful lot of time I can give to hospices but I wanted to give something back somehow. I decided to do a Charity Tuesday and donate the money I make to Chestnut Tree House Children’s Hospice. This encourages people to hold their party on a Tuesday. I charge £150 on a Tuesday for my usual two hour party. It can be anywhere and it doesn’t matter how many kids, or what whether it is a disco or a tomfoolery party and £120 of the fee goes to Chestnut Tree House Children’s Hospice.

That is incredibly generous of you!

It is one way I can give something back and so far it has been fantastic and I have just received a message from them saying that so far I have raised about £1300 since I started this is September.

Having a party on a Tuesday sometimes can be a bit of a nightmare because there are a lot of after school activities and venues are often booked up as well. So it is great to see so many people booking.

How far do you travel for your parties?

You have had bookings from some quite famous people.

Yes, I have had the good fortune to do so. I was booked to do children’s parties for Lenny Henry and Nigella Lawson and I also did a party for Uma Thurman’s daughter’s 12th birthday. I have also entertained children in the grounds of Kensington Palace for one of the members of the Royal family.

Have you ever had a party where the children are so uncontrollable that you feel like throwing your hands in the air and asking yourself why you bother?

To me it sounds like an incredible tough career, what is the appeal?

There are times when you think the children aren’t paying attention and you think ‘Why am I here?’ I have had children swinging off chandeliers (not the royal children of course) and had things thrown around. But that is part of the appeal, every party is different. I never get bored of what I am doing because every time I do a party the reactions and the behaviour of the children are totally different. Of course it would be lovely if every single child sat down and did exactly what I ask of them to but that is not going to happen working with 4-7 year olds. I will always have one or two that will keep it interesting, they’ll either blurt something out that is wildly inappropriate or just give a fantastic heckle that I have to try and deal with. It keeps me on my toes. After the most chaotic parties it amazes me when the parents thank me and assure me that it was great.

Is the Beans on Toast tour different to your parties?

The Beans on Toast show is entirely different to the parties, I am not taking my birthday show into theatres. It is a completely different atmosphere. It is more fast paced, there are songs, activities, I get children up on stage for some of the time, at no point are they sitting watching a show for an hour – They ARE the show. You also find that the parents are more responsive than at a party because at a party they tend to be at the back talking or preparing food whereas at a theatre they are sitting next to their child enjoying the show with them..

How did the idea for The Beans on Toast Show start?

I had seen quiet a few nationally known children’s entertainers with my own children and I knew I could do something similar, maybe even better. There are a lot of over-produced shows and television shows that tour around, what is lacking are fun shows where kids get really involved. My show is really interactive. Depending on the venue it is possible to have 60 to 70 kids on the stage all doing the Hokey Cokey with me. It is great! I constantly get people out of the audience, we all sing Heads Shoulders, Beans on Toast and everyone gets involved. What makes this show different to others is the interaction between the audience and what is going on upon the stage.

Beans on Toast Show – tell me about the name?

The name came purely by mistake! I needed an original magic word, I was doing a show and I needed a word I said ‘Abracadabra Beans on Toast’ – I think I must have had them for lunch or something that day and it just came into my head. So now as well as being my magic word it is also the name of the show.

I have to be honest there are no beans on toast or any cooking at all on stage. I am sure there were people at my last show that were there for a cookery programme and got a bit confused.

I see that you are also doing a couple of festivals.

Yes I do a couple of festivals a year. They are my Tomfoolery birthday party routine rather that the Beans on Toast Show. I am in Horsham Park throughout the summer. I have the Vegfest down in Brighton later this year, the prom at Bognor Regis and Ashington festival. They are really good public shows where there is stuff going on through out the day and I go along a do my hour long set. This year at the Ashington festival we are debuting a new act call ed Dressage Foolery I can’t say too much about it at the moment except that it involves horses and it is not a theatre show, it is an arena show. It is very different.

What do your own children think of you? Have your jokes worn thin on them?

I have two mini-foolerys, seven and eight years old. They now get bored to tears, they are great for trying stuff out on but bless them, they get dragged along to everything. They are on the Beans on Toast Show tour with me probably every day they are great and really help out. But yes when they come out of school and say ‘Yay! We are going to a birthday party’, and I tell that that I am the entertainer I do get the response ‘Oh really? Not again!”

Tomfoolery and his Beans on Toast Tour is playing at the Chequer Mead, East Grinstead on 20th Feb, the Capitol Horsham in April and the Hawth, Crawley in May