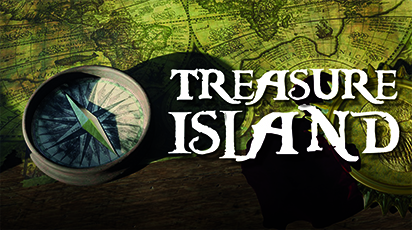 “Fifteen men on the dead man’s chest….Yo-ho-ho and a bottle of rum!“

Robert Louis Stevenson’s classic, TREASURE ISLAND, will be brought to life on stage in spring in a brand new adaptation being produced and directed by The Hawth Crawley.

The West Sussex theatre, which is best known for presenting work by other companies is taking the bold step of creating new theatre of its own for the first time in its thirty year history.

Dave Watmore, the show’s Producer and General Manager at the venue says, ‘We have collaborated and worked in partnership with theatre companies in the past, and of course we have presented some of the best performances on the touring circuit for the last three decades – All these experiences have taught us so much, and now feels like the right time to create something ourselves, putting all our experiences into a top class production that we can call our own. That is very exciting – for this show and for the future of the theatre.’

With innovative new staging, The Hawth Studio will be transformed in order to transport audiences to the Admiral Benbow Inn and far beyond, for a night of unforgettable adventure. As young Jim Hawkins is drawn into a world of revenge, pirates and the search for Captain Flint’s gold, unlikely friends will be made, sea shanties will be sung and mutiny will occur as Long John Silver and the crew sail for Treasure Island!

Treasure Island will be directed by the internationally acclaimed Sarah Slator and features a superb cast of actors including Hazel Monaghan, Simon Stallard, Ethan Taylor and Kim Wright, alongside young performers who will be selected at auditions on 11th January 2020.

All those auditioning will be required to sing a song taught during the audition and perform and extract from the script which can be found in advance at hawth.co.uk, under ‘Treasure Island Auditions’.

The auditions will take place on Saturday 11 January and are open to all, with registration taking place 30 minutes before your age group’s audition time.

Those auditioning must be able to commit to all rehearsals and performances at The Hawth. Rehearsals: 15 – 19 February, 28 February – 12 March. Performances: 12 – 15 March.