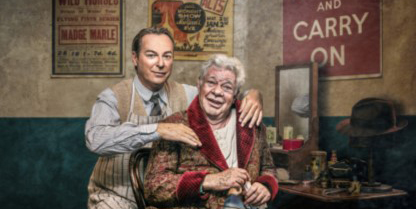 How fitting that in present times the old maxim of stoicism ‘The show must go on’ is the message delivered in this 2021 production of Ronald Harwood’s wonderfully timeless play. The seductive combination of ancient ‘luvvie’ and his faithful dresser – in reality organiser, cajoler, ego massaging servant- cum-nanny – is what Mr Harwood himself was for many years 50% of (dresser to Sir Donald Wolfit). He tells us that although not autobiographical, there are definite similarities to the behaviour exhibited by Wolfit and ‘Sir’ in ‘The Dresser’.


The play is set in 1941 in the early part of World War Two, complete with warning sirens, in an atmosphere of being ‘up against it albeit with a good British stiff upper lip. ‘Sir’ played by Matthew Kelly is on the brink of extinction, and everyone knows it, the evidence is all there. When the play opens his rapidly fading performance skills, as well as his health – he’s been taken off to hospital – are being discussed by his long suffering partner ‘Her Ladyship’, played by Emma Amos, ably delivering an upbeat edge to the part, and the Dresser himself, Norman, played by Julian Clary, executing the role in his usual camp and waspish style.

‘The Dresser’ was first staged 41 years ago, predominantly as a two-hander, however the standout performances for me have been from Albert Finney and Tom Courtenay (film version 1983) and then in the 2015 TV film with Anthony Hopkins and Ian McKellen. Hard acts to follow. Literally. This production however was made entirely their own by Kelly and Clary, who’ve come a long way since the days of ‘Stars in their Eyes’ and ‘The Joan Collins Fan Club’. Both are now accomplished actors, Matthew Kelly having won an Olivier award for ‘Of Mice and Men’ and proved his skills with diverse roles in TV’s ‘Casualty’ and ‘Marple’ to Shakespeare and Chekhov. Julian Clary, best known for his witty self-titled ‘mincing’ humour, regular appearances on ‘Just a Minute’ and ‘Have I got News for You’, and a plethora of panto roles, now demonstrates his talents in serious performance.


‘The Dresser’ is a poignant snapshot of ‘Sir’, the aging actor manager dinosaur, his diminishing performing prowess all too pitifully apparent, preparing for his 227th role of King Lear. He is rambling, emotional, absent minded and pathetically reliant on Norman, who in turn is briskly efficient, brusquely persuasive, whilst maintaining an almost Uriah Heep-like servility. Both men are psychologically needy. The play covers just this one final night with a single change of set which is brilliantly managed, thanks to its designer, Tim Shortall. The wartime atmosphere, grey dinginess, ‘40s shabby accoutrements and general air of foreboding is all expertly achieved in ‘Sir’s dressing room, and the backstage ‘wings’ set was brilliant.

Matthew Kelly gives it his all, alternating pathos with boom and bluster (almost rivalling Brian Blessed at times!). His rather forlorn ‘what’s going on?’ face when applying black make-up for Othello when he was about to go on as Lear is quite affecting, and Norman’s swift reassurances and ‘sorting him out’ are deftly performed by Julian Clary. However, when it comes to the scene where Norman delivers his speech which is full of slight recriminations for the life he’s devoted to Sir, was Clary’s chance to really shine. I was hoping for a little more bitter resentment, a slightly more venomous taunting, however he didn’t really manage to break out of the campy Clary wryness.


It has to be said though, that to witness the self-obsessed egotistical acting giant lording it over – in his eyes – lesser mortals, albeit when clearly quite literally fading from the spotlight, patting the young actress’s bottom, and believing in his own omnipotence, the Zeitgeist of different times was disquieting. Especially so when you have cause to wonder on occasion how much has changed ….


All in all though, it was a joy to see this wonderful piece of drama once more, baring all the defects and scars of the human condition via the backdrop of the theatre, brilliantly directed by Terry Johnson.