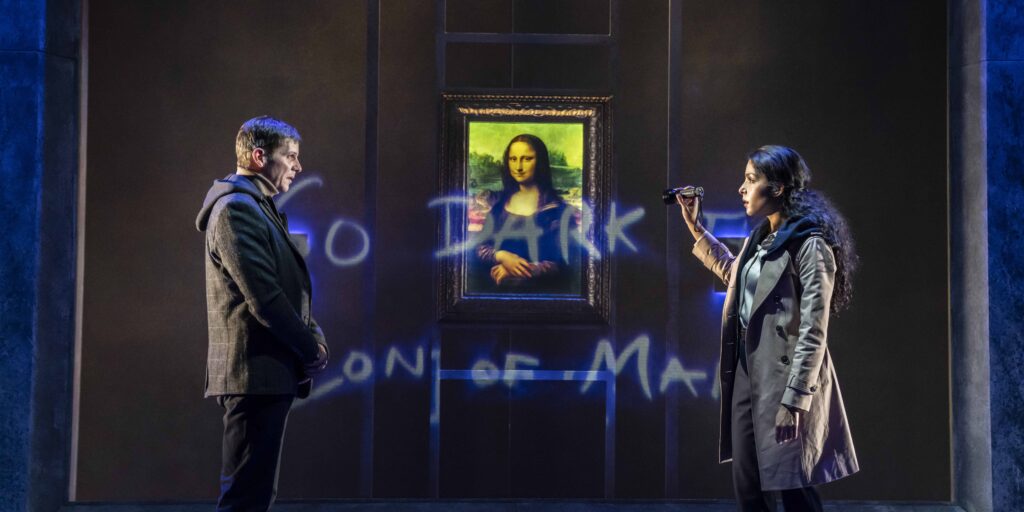 The Da Vinci Code started touring the UK this year and is expected to be a very popular production of the original and gripping novel by Dan Brown. At the time, the book received a lot of attention as it detailed a contentious religious script of conspiracy and code breaking.

Olivier Award-wining, Nigel Harman plays symbologist Professor Robert Langdon the historical teaching professor, who is unknowingly leered into a symbolic and code breaking murder of Jacques Sauniere (Andrew Lewis) the curator of the Louvre, Paris. Meeting Sophie Neveu, Jacques granddaughter at the scene, the tale of an ancient religious secret that questions longstanding religious beliefs links her family through the works of Leonardo Da Vinci at the Louvre and beyond. In her UK theatrical debut, Hannah Rose Caton is outstanding along with the rest of the cast.

The plot is fast paced and complicated, as anyone familiar with the book or film will remember and I think having this prior insight into the story definitely helps. As the story becomes more intricate, Langdon and Neveu seek assistance from Sir Teabing, played by the wonderful Danny John-Jules.

At every twist and turn there is question and riddles to solve. The set works brilliantly as projection is used to illustrate the changing environments and illuminate the code breaking words and numbers. Even when flying to historical vaults in England the clouds depict the scene well within the aircraft.

Every cast member deserves a mention as all are superb in their character but Joshua Lacey’s portrayal of Silas, an Opus Dei monk, from the beginning of act one had me transfixed, wincing in my seat at times and when coupled with Debra Michaels as character Sister Sandrine produced superb theatre.

Adapted by Rachel Wagstaff and Duncan Abel into the theatrical performance the whole presentation of the show, from the cast chanting and character interaction to the lightning and projection effects, narrates what is a complicated and intricate story into two hours of excellent entertainment.

The tour remains at The Theatre Royal Brighton until Saturday 19th March and plays throughout the Country until the end of November.

Interview with the cast of The Da Vinci Code