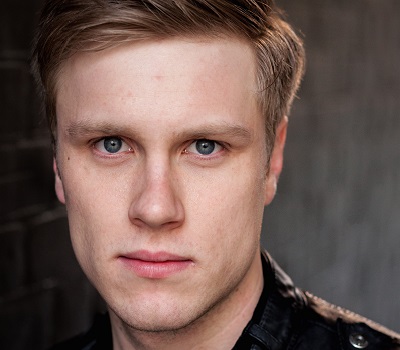 Richard Lowe is about to embark on a nationwide tour of Avenue Q which includes the Assembly Halls, Tunbridge Wells, between 1st-6th June. With the help of two puppets he plays the parts of Princeton and Rod. He talks to Sammi O’Neill about the roles and the tour. 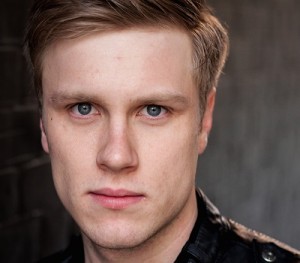 Richard, you are rehearsing for a tour of Avenue Q at the moment, how is it going?

We are about 2 1/2 weeks into rehearsals and we open in Colchester on the 21st April. We are having a great time. It is quite tough and challenging. I haven’t really done anything like this before and was surprised how difficult it is. The skill is to make working with the puppets look easy so that when people see it on stage they don’t realise how difficult it is. Sometimes it feels like I am splitting my brain into two with the puppet but it is getting easier.

Have you worked with puppets before?

Yes, I was in a play last year called The Light Princess. It was a great show but it was very different to this. The puppets were a very different style to Avenue Q. The technique in which they were used was completely different. I had seen Avenue Q before, and I knew what the puppets were meant to do and I came into this show feeling quite confident. It came as a bit of a shock to how different and how much harder it was.

What has been the hardest thing to master?

For me, it has been walking and talking with the puppet. You have got to make the puppet walk in a different rhythm to the puppets lips, and these should be in synchronisation with my lips. It’s all a bit crazy and disjointed. After a lot of repetition it gets there but it was very tough at first.

You play two lovely characters, please tell me about them.

Yes I do – I am very lucky! I play Princeton who has just left university. He is 23 years old, he has a BA in English but like a lot of people, he doesn’t really know what he is going to do with it. He gets this idea into his head that he needs to find his purpose in life, something important to do and he spends the rest of the show trying to find it. He moves to Avenue Q and meets a whole range of crazy but lovely characters.

I also play Rod who is quite an uptight character. Rod is obnoxious and set in his ways. He is an investment banker and a Republican. Rod is very formal in everything he does but he has a secret… Actually everybody knows what it is but he won’t admit it to anyone not even himself. It’s actually really sad and heartbreaking. You really just want him to open up. All his friends would support him. Rod is my favourite character in the show as he has so much going on. I am very lucky that he is one of my characters. 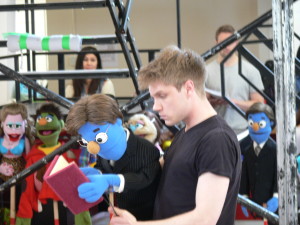 Yes they really are fantastic that has been a great help they are so experienced. It is very exciting.

There are a lot of adult themes that run through Avenue Q that are dealt with in a very jokey manner. Do you think that works?

That is what is so clever about the show. It talks about real issues that are quite close to the mark but coming across in a friendly and almost a educational way almost like a ‘grown-ups’ version of the Sesame Street TV show. I am thinking about one of the songs in particular ‘Everyone’s a little bit racist’. It is very clever and comedic. Avenue Q deals with real life situations but makes it very funny.

What will it be like going on tour with the puppets? Will they party all night?
Oh yes you can’t keep them down! It is going to be great fun. I have never been on a tour of this scale before so it is quite exciting. We are on tour from April and we visit a different town each week so it is pretty non-stop. It’ll be tough but great fun. I am looking forward to going to new places as well.

Where are you looking forward to going to most? (you’re meant to say Tunbridge Wells here)

Funnily enough I have a lot of family and friends in Tunbridge Wells and it is a lovely part of the world so yes definitely I am excited about visiting Tunbridge Wells. I just want to get going and get on the road.

Avenue Q will be at the Assembly Halls Tunbridge Wells from 1st – 6th June 2015.

It is also playing at other theatres in the South East, for full details and tour dates please click here.