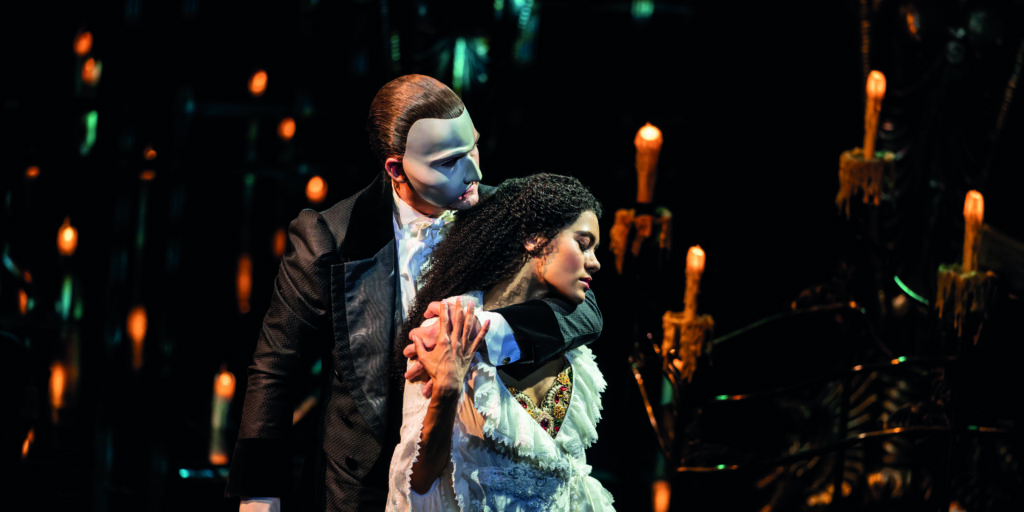 Phantom of the Opera
Her Majesty’s Theatre

In July 2020, Composer Andrew Lloyd Webber took to Twitter to respond to Cameron Mackintosh‘s recently published Evening Standard article, in which he declared that The Phantom of the Opera would be permanently shutting down. Lloyd Webber tweeted, “As far as I’m concerned, Phantom will re-open as soon as is possible”.

A month later Mackintosh made more than 850 of his staff redundant refusing to take advantage of government schemes that would have prevented the redundancies at the same time that he was planning to build a five-bedroom penthouse apartment at the top of the Novello Theatre. Ironically, a short time later Mackintosh spearheaded the The Show Must Go On campaign and faced mounting criticism for such explicit hypocrisy.

The Phantom of the Opera eventually reopened almost exactly a year later and in his programme notes, Lloyd Webber bemoans theatres closing during the pandemic and makes a comparison with mass sporting events which were allowed to continue. An easy target for us arty types although he fails to recognise the majority of such events are open air whereas very few of his musicals can boast the same.

So after this public bickering and real life soap opera, what has become of this critically acclaimed production.

The plot revolves around a beautiful soprano, Christine Daaé, who becomes the obsession of a mysterious, masked musical genius living in the subterranean labyrinth beneath the Paris Opéra House. The novel is partly inspired by historical events at the Paris Opera during the nineteenth century, and by an apocryphal tale concerning the use of a former ballet pupil’s skeleton in Carl Maria von Weber‘s 1841 production of Der Freischütz.

In the past, the Phantom has been compared unfavourably to other monsters featured in Gothic horror novels such as Frankenstein’s monster, Dr. Jekyll, Dorian Gray, and Count Dracula. Whilst The Phantom of the Opera ticks every box to be included in the genre of the Gothic novel, in reality the Phantom is just a deformed man, he has ghost-like qualities in that no one can ever find him or his lair and he is therefore seen as a monster. People are frightened by him because of his deformities and the acts of violence he commits. A better way to describe the novel and therefore the musical adaptation is as a Gothic romance.

At the centre of it all is a love triangle between the Phantom, Christine, and Raoul (Christine’s more traditional love interest). Killian Donnelly as the Phantom plays a difficult role, sinister yet vulnerable, with aplomb however it is Lucy St Louis as Christine who steals the show with her voice of an angel. She brings the house down and thankfully, not the chandelier, with her beautiful rendition of Wishing You Were Somehow Here Again. I found Rhys Whitfield’s Raoul rather insipid but there is excellent support, in particular from Francesca Ellis whose performance as Madame Giry is like a cross between Madame Thenardier (Les Misérables) and Mrs. Danvers (Rebecca) both roles she must be destined to play if she hasn’t already.

For me the main weakness of the show is the music itself. There are a few well known numbers although with a controversial history. The estate of Puccini sued Lloyd Webber for similarities between The Music of the Night and La Fanciulla (ALW settled out of court) and as a big fan of Pink Floyd, no-one can deny the famous chromatic riff from the titular song is almost identical to the track Echoes from the wonderful album Meddle. Roger Waters is famously quoted as saying that life was too long to bother suing Lloyd Webber although not quite as politely as that. All I Ask of You is merely an echo of The Music of the Night.

The rest of the score is either instantly forgettable or mind-numbingly repetitive and with the West End re-opening productions such as Les Misérables, Wicked, Matilda and even Mamma Mia! it just doesn’t compare favourably.