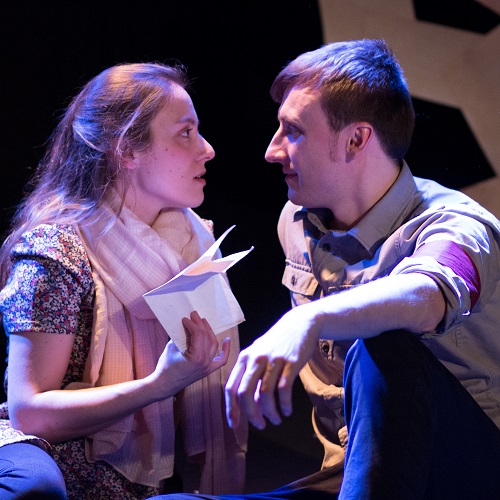 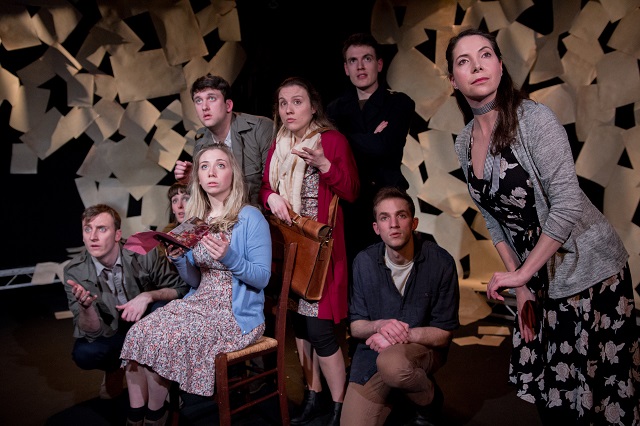 One Last Thing (For Now) | Review

I enter the theatre space, which is a sanctuary from the virtually packed pub downstairs (it’s rugby night). I’m at the Old Red Lion Pub & Theatre in Islington. The darkened set is strewn with blank white pages. Designed by Elliot Squire, it evokes images of frantic letter writing and instantly makes space feel smaller and more intimate.

In these moments of quiet anticipation before the performance starts, in amongst the audience stalls (or in this case, makeshift benches), it is the perfect place in which to consider the play’s themes of love and conflict.

Chatter dies down in preparation for the action onstage to unfold, and unfold it does, at a rapid pace. ‘One Last Thing (For Now)‘, performed by the Althea Theatre, is a highly stylised ensemble piece, relying on strong individual characterisations, a poignant dialogue, subtle physical theatre, and a few, well-chosen props.

I expect to hear the sound of gunfire, but instead, it’s a trombone, slightly off key, and we’re off, following the characters around the stage as they each go on a journey. We follow their thoughts, feelings, and emotions, all of which are expressed through letter form. Their words are seamlessly carried across continents, cultures, and time.

Writer and Director Lilac Yosiphon draws on real-life experience and memories for the script, and this makes each story more powerful. The cast are a collection of nationalities, and so are their characters; expertly conveyed with the help of dialogue coach Laura Keele.

It is often unclear what direction the piece is going in, as being clouded with emotion, there is no coherent time frame, and the characters have so much to say.

But this is intentional: it is chaotic, jarring, yet cleverly conveyed. The trombone serves to signify moments of discourse throughout the narrative. What will happen to the woman whose lover is off fighting on the Front Line? Will his heart open to her before it’s too late? (Elizabeth Stretton and Tom Shah play out these uncomfortable relations so realistically)

And the G.I. in Vietnam, with a wife back home, who has fallen for a fellow soldier? Will their relationship endure the war? Is his fate going to be the same as the tentative man who stands on a platform next to a near-hysterical lass, both of them longing, after waiting months for a word…one word, anything…for the chance to finally embrace their beloveds.

In a packed classroom an Israeli teacher (played by Josephine Arden), stands before her class, asking them to write down their hopes and dreams. She silently prays that these won’t involve the army, but deep down, knows that this is inevitable, unavoidable.

There are unanswered questions, deliberately (I suspect) heightened by the confusion in separating out the characters. With eight cast members playing multiple roles, it is often difficult to determine which story belongs to which character. But I guess that’s the point.

Today, myriad modern technology means that we can be instantly connected to our loved ones. Skype and text are prime examples, as demonstrated by actors Josephine Arden and Thomas Wingfield; but we frequently get our wires crossed. Why is it so difficult to say what we really feel – and whatever happened to the good old-fashioned love letter?

One of the most powerful montages for me involved a woman ‘from ‘Oop Narth’ who wanted to send her ‘touch’ to her husband in the trenches. Startlingly, she cuts off one hand, followed by the other as the first time she ‘missed the post’. It is absurd but does starkly convey the desperation after a breakdown in communication.

It makes me think. And it makes me feel. Above all, it makes me think seriously, by myself on the late night train back to Brighton, how I would feel if I were in any of these women’s situations. And that, in my opinion, is what a good piece of theatre should do, and it is expertly done so.

‘One Last Thing (For Now) is playing at the Old Red Lion Theatre in Islington (the pub and theatre is located near Angel Tube Station) until Saturday 25th March. (Tuesday – Saturday at 7:30pm, Saturday and Sunday matinees 3pm)