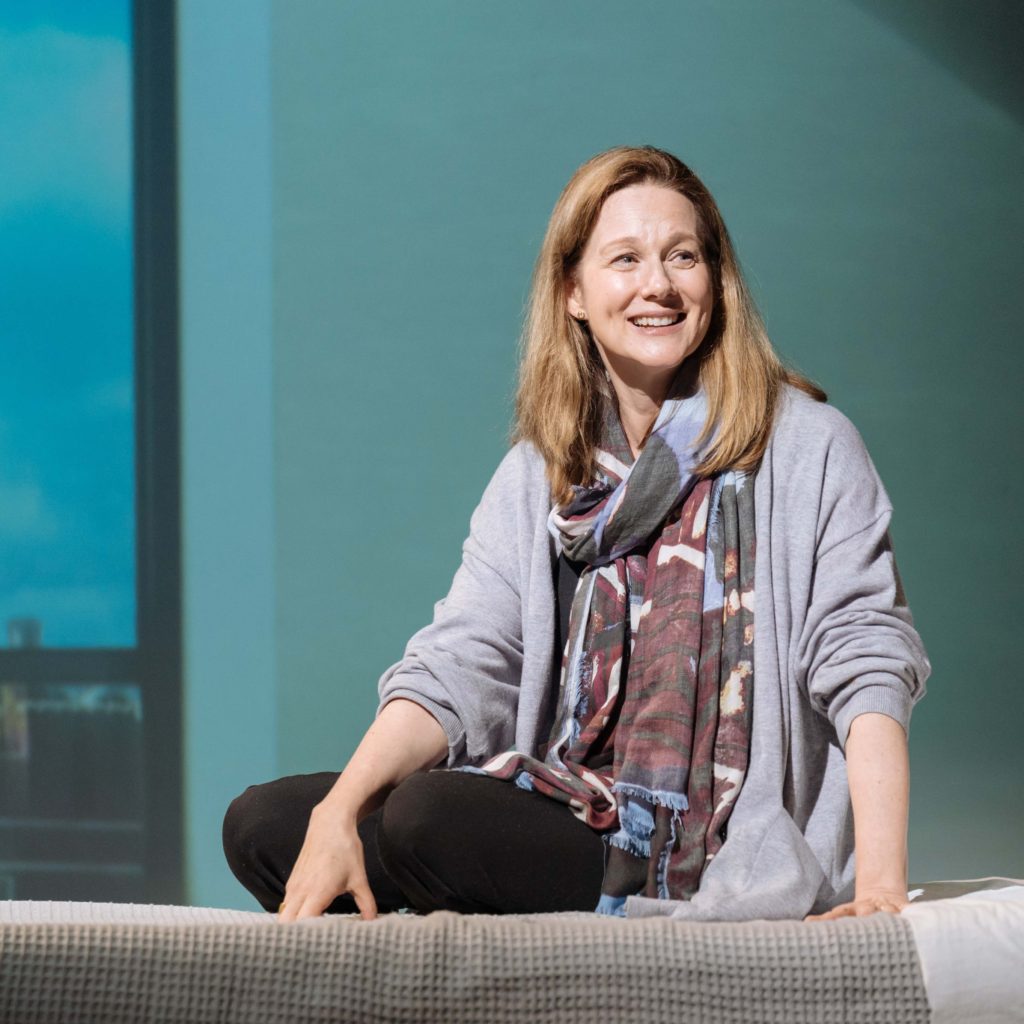 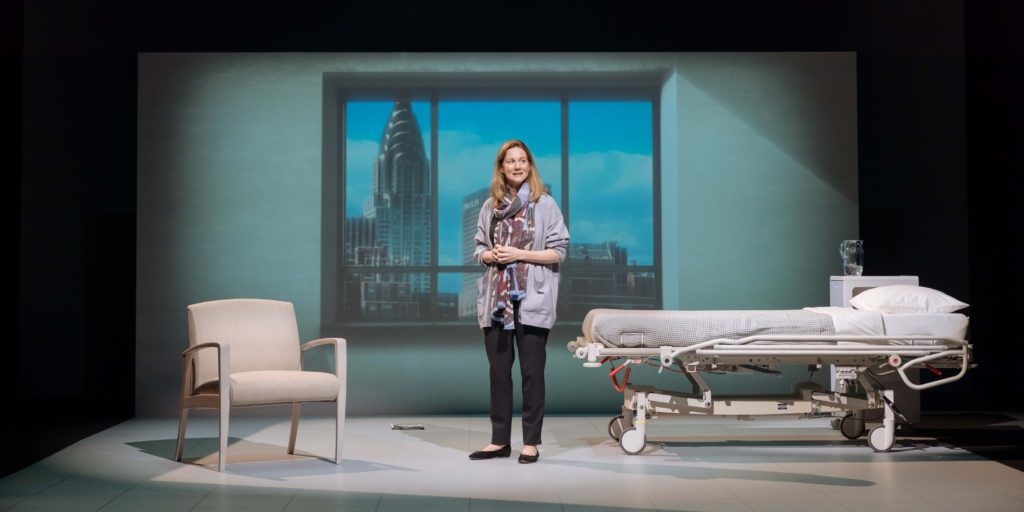 God bless the Bridge Theatre. Since its arrival on the scene, it’s been the home of pioneering, groundbreaking exciting work, from the wisecracking Young Marx through to the rule-breaking Julius Caesar – and if My Name is Lucy Barton is anything to go by, The Bridge shows no signs of stopping. Adapted from the Pulitzer Prize winning and Man Booker nominated Elizabeth Stroud novel by Rona Munro and starring Laura Linney, it is a tale where everything happens, and nothing happens. Our narrator opens the play directing the audience to a moment in her life, nine weeks where she was hospitalised with a mysterious, unnamed illness, but focusses on the five days where Lucy was visited by her caustic, brittle Midwestern mother.

The danger with one man shows is that they can lose their dynamism, and become static and awkward, an ego trip solely for the benefit of the actor on stage. Thankfully MNILB is not one of those casualties, and Richard Eyre has clearly worked closely with Linney helping her to craft characters that come off the page and charm the audience. The staging is simple but effective; a hospital bed, a bedside table, and a chair – and of course three screens, designed by Luke Halls, steadily shifting between the window of a New York hospital where the Chrysler building shines through to the green fields, and a dilapidated farmhouse standing abandoned in a field. Peter Mumford’s delicate lighting perfectly complements the simplistic staging, making a statement but never overtaking and shadowing Linney’s pitch-perfect performance

And speaking of…MNILB in a one woman understated tour de force by Laura Linney, making her British stage debut at The Bridge. Slipping between the nervous, uncertain Lucy and her brash mother is a sight to behold, as Linney embodies both characters with such physicality that makes it impossible to see the shift in characters. Linney commands the room with such presence, bringing huge belly laughs as she slips into a Midwestern drawl, recounting stories of the hometown Lucy left behind with such a bitchy, but an immediately recognisable quality that all of us have seen in members of our family. But as Lucy she is a triumph, slowly breaking the hearts of each audience member and holding us delicately in the palm of her hand the entire time. This is first and foremost a play about the dynamics of mothers and daughters, but it also about the difficulties of escaping a life of poverty. The descriptions of Lucy’s childhood, evenings spent in a classroom because it was warmer than the garage she lived in, and a particularly poignant scene where she describes being locked in her father’s truck with a live snake shake the audience with bracingly blunt depictions of what is essentially child abuse. Yet it is the later scenes where Lucy revisits her mother nine years later that the real emotional payoff takes place. Linney earns the audience’s trust, and in turn she earns the tears that I saw fall on many faces (including my own). No spoilers, but I defy anyone to not watch MNILB and not immediately phone home, just to hear the sound of a parent’s voice.

On the night I saw the performance, Linney was rewarded with an auditorium on their feet, clapping more enthusiastically than I had seen in a long time. Those four weeks she’s there will fly past – one not to miss

My Name is Lucy Barton is currently playing at The Bridge Theatre at London Bridge until 23rd June. To find out more or to book tickets visit: https://bridgetheatre.co.uk/whats-on/my-name-is-lucy-barton/