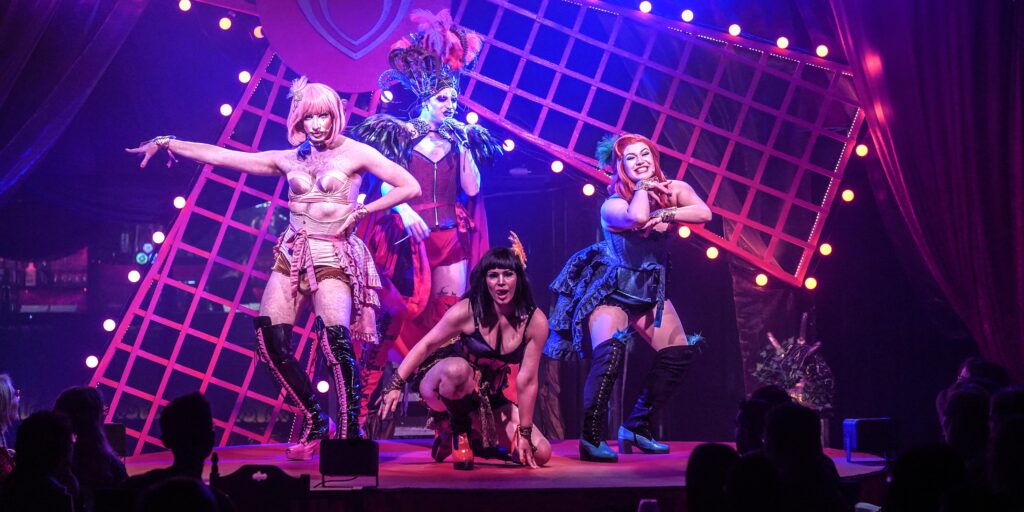 On Thursday 28th April, I was among those fortunate enough to be invited to the Mulan Rouge for a night of head-spinning partying, stomach-paining laughter, and mouth-watering food.

Mulan must disguise themself as a man to join the war effort as the huns prepare to attack, but when their regiment commandeers the glittering Mulan Rouge, they find themselves surrounded by glitz, glamour and go-go girls. So grab all your soul sistas (lemme hear y’all flow sistas) and descend below the flames of Paris for a burning hot, drag-tastic soiree. Down here, diamonds really are a queen’s best friend.

Mulan Rouge was truly a celebration of identity, with the storylines of Disney’s Mulan and Baz Lehrmann’s Moulin Rouge mashed into an electrifying, exhilarating eruption of drag excellence.

The audience, ‘the ancestors’, follow Mulan (played by Ella Cumber) as she attempts to impress the matchmaker, then learns the Huns (*snap*) are invading, so impersonates a man to fight in her ‘Daddy’s’ place. This segment takes place in a smaller railway arch of The Vaults venue, where the seating was intimate, surrounding the small stage on three sides. Appetisers were also on offer.

For the larger portion of the show, the ‘ancestors’ filter through to a second, larger, railway arch, filled with long wooden tables and chandeliers, that very much gave a ‘Hogwarts’ feel! It must be said, this ‘reveal’ moment was very much enjoyed by everyone! In this second room, the show continues with Mulan (nicknamed ‘Daddy’ by her comrades) arriving at the Mulan Rouge to train to defeat the Huns (*snap*). Training sequences, lip syncing, declarations of love and a rather rambunctious Hen Party are among the highlights of the remainder of the performance.

On the surface, any person may rebuke the suggestion of similarities between Mulan and Moulin Rouge. However, it is mere testament to director and writer ShayShay, how cohesive and aligned the storylines were. Not only was the story arch of the performance a fulfilling one, but by the end, it was almost odd to consider the movies as anything but similar. Setting this performance in the wonderful world of drag was another huge asset to the storytelling. The clever use of puns (General Lee), drag terminology (Huns *snap*), along with a sprinkling of pop culture (Mean Girls, Love Island) and 80s classics (Eye of the Tiger, Daddy Cool), meant there were references for everyone to delight in. Writer ShayShay took a bow at the end, which was absolutely well deserved.

And what a delight it was! The audience was enthused from the start, with pantomime-like interactions and call-and-response moments. By the end of the show (possibly due to the strong drinks too), everyone was in full-on party-mode, on their feet dancing along with the cast, and singing at the top of their lungs. Mulan Rouge is undeniably a feel-good show, and certainly a great night out.

Eight in number, the cast was small, but by no means did this reflect on their stage presence. Each actor alone could hold the attention of the room in the palm of their hand, and between the eight of them, we were enraptured.

Mulan was played by Ella Cumber, who mastered all sides of the character perfectly. Madame, the Mulan Rouge owner, was played by Ruby Wednesday, an phenomenal performer with impeccable comedic timing. ‘Go Go Girls’ Roxy (Brett Sinclair) and Robin (Daisy Porter) provided constant entertainment, and their energy was unmatched, but it was the singing perfection of Ginger (Grace Kelly Miller) that placed her as my favourite. And lastly, the Drag King ‘IFU’ Soldiers, General Lee (Carmella Brown), Private Dancer (Helena Fox) and Major (Lizzy Cox), had the audience close to tears with laughter on many an occasion, and certainly had a place in everyone’s hearts. I admit, I was admiring General Lee’s eyebrows the entire night.

It should also be mentioned that the interactions between the Drag Kings and Drag Queens was unique and refreshing to watch. Drag Kings are rarely given as much prominence as Queens, yet the stage dynamics between Madame and General Lee in particular were incredible, and made the performance all the better.

Christine Ting-Huan Urquhart did a wonderful job with costume and set design; each room incorporated both Chinese and French touches in decor, and each outfit was uniquely exquisite, and has quite renewed my desire for a corset. Clancy Flynn, the lighting designer, did a wonderful job of guiding the audiences’ gaze throughout the show, especially when simultaneous performances on multiple stages could have had viewers disorientated. And lastly, honourable mentions to David Gough on sound design, Alissa James on choreography, and stage managers Hannah Wallis and Kate Tregear, for all making Mulan Rouge flawless in flow, and consistently engaging.

The dining element to Mulan Rouge was a charming touch. As I overheard one woman say, ‘being served food here is great; as with theatre, you never know whether to eat before or afterwards!’ and I have to agree with her. At Mulan Rouge we were treated to a starter, main course and dessert; each course as delicious as the next, and very filling too! The original menu was curated by Flavourology, an industry leader in edible experiences. The starter ‘Le Champignon De Melinger’: mushroom and celeriac pate served with pickled enoki mushroom and kohlrabi, chives and truffle oil and seasoned crackers. The main ‘Le Poulet Rouge’: boneless confit chicken, 24hr marinated in lemongrass ginger and five spice, served with crispy spring onion, petit pois a la Francaise, crispy potatoes, and charred broccoli dressed with watercress and basil oil. The dessert ‘La Choco Can Can’: double chocolate and butterscotch beetroot brownie, served with Chantilly cream, orange zest and seasonal berries. My favourite was certainly the main, as the chicken was absolutely divine, and no matter how many potatoes I had, I always wanted more. Of course, there were dietary alternatives for those needing them.

In the words of Baz Lerhmann’s Moulin Rouge, ‘this story is about truth, beauty, freedom; but above all things, this story is about love’. I think this is very much true for Mulan Rouge as well, except with the small additions of knee-high boots, Huns (*snap*), and inflatable penises. Come what may, Mulan Rouge is a guaranteed memorable night out!

Mulan Rouge is playing at The Vaults until the 28th of August 2022. Doors open at 6:45pm and the show begins promptly at 7:15pm. Email any questions to the wonderful team at enquiries@thevaults.london. All images belong to Damien Frost.