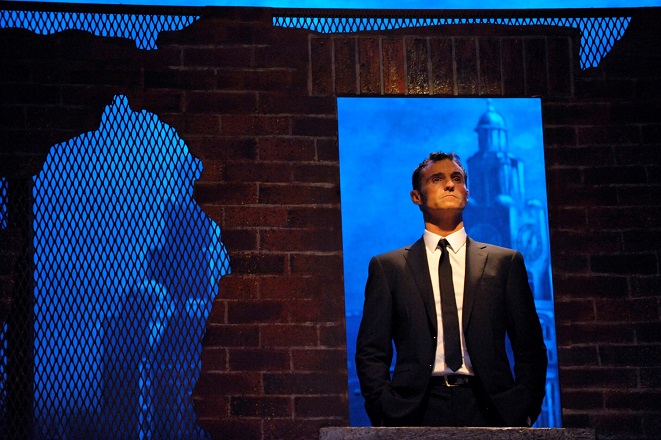 Marti Pellow is about to come to the Assembly Halls Theatre, Tunbridge Wells to star as the Narrator in Blood Brothers, a captivating and moving musical of twins who, separated at birth, grow up on opposite sides of the tracks, only to meet again with fateful consequences.

You’ve had a very busy few months – Evita in the West End, a two-week stint with Blood Brothers in Glasgow straight after, and now you re-join the production for a UK tour!

I’m a glutton for punishment (laughs). No, the good thing about Willy Russell’s Blood Brothers, is that I love it. But most importantly, I love the people who work on that project and who are part of that team. I did it in the West End for Bill (Kenwright) and then I went on tour, and there’s a wee family there of people who stay with Blood Brothers for several years. People like Maureen Nolan, who’s an absolute sweetheart to work with, and Sean Jones, who plays Mickey, who I’m such a big fan of.

What is it about this show and its appeal to you?

Well, as I said, first and foremost, it’s the people that are involved in the project and it’s the people that Bill Kenwright casts. It’s a very earthy piece, it’s got a lot of heart, it’s honest, and for me, there are a lot of things that I can relate to. The imagery, the feelings that it evokes are feelings that I can relate to from growing up as a child. I think that when you come from a working class background and you see how hard it is for people to make ends meet, worrying about their jobs or their vocations in life, the journey that Blood Brothers takes you on, especially at the tail-end of the journey where there’s mass unemployment that’s going on and he’s finding it difficult to find a job, I can relate to that because coming from Clydebank and the shipyards, at the tail-end of the Eighties when Thatcherism was at its most potent, a large majority of the shipyards were closing down and the miners’ strikes were happening, it was a very prevalent time for me, a very provocative time. So when I go and do Blood Brothers, I feel all that internally. And it’s just such a powerful and honest piece. You get musical theatre, like Chicago for instance, Billy Flynn’s all jazz hands and teeth and there’s a swagger to him. But there’s something very intrinsically British about Blood Brothers that I love. And the people who work on it have so much heart and understand the piece and on a deeper level. And it’s just wonderful to see the audience’s reaction. It’s just brilliant. And I think that’s why the British public hold it in such great esteem.

Do you think it’s a show that appeals to a younger audience?

It’s a rite of passage. I think it works well within the curriculum of the youth culture. A large majority of kids that I meet, who wait at the stage door asking me for an autograph or a photo, they tell me this is the first piece of musical theatre they’ve ever seen. And what an introduction.

There is much less singing for you in Blood Brothers than many of your other roles, but you lose your Glaswegian accent for a Liverpudlian one – did you have training?

It’s actually my Glaspudlian accent (laughs) which is a hybrid Glasgow/Liverpudlian accent. I’ve got loads of Scouse friends and we would go and visit folks that we knew who lived in a place called Ormskirk, which is more woolyback than full-on Scouse. Wet Wet Wet, spent a lot of time recording there, doing our early demos was recorded just outside Kirkby in a studio there called Amazon Studios. Liverpool has been so prolific when it comes to music, especially with the advent of the Beatles and how much they brought to the world. Liverpool’s such a rich tapestry of music, so we always wanted to go there and see what it was all about. And the city has been so good to me throughout the years and supported me as a solo artist and musical theatre. When I went up there and did a show, An Evening of Hope (Marti’s 2013 show tunes album), which was dedicated to the wives and the mothers of the Hillsborough disaster, who all came along, so it was a very poignant night, and it was under the umbrella of Bill Kenwright‘s mum, who was a lovely lady, the clue was in her name, Hope Kenwright. I have so many memories of Liverpool and will continue to have. And another reason I have a kinship with Blood Brothers too.

You turn 50 in March – how are you planning to celebrate your milestone?

I plan to really embrace it. Everybody says, oh you’re 50, that’s half a century, but I remember saying that to my father and thinking it was a gazillion years away for me. And I’m happy about it. As the clock starts to tick you really become aware about the circle of life and time in general, there becomes an intensity to your writing and the things you want to achieve and having balance in your life and all those things that sound pretty adult.

Blood Brothers is playing at the Assembly Halls Theatre, Tunbridge Wells, from the 26th-31st January.