Drayton Arms Theatre until Saturday 14 May 2016

It could be said that if you contemplate a night of entertainment involving musical farce, you should expect the unexpected.  That is undoubtedly the case with the production of Lucky Stiff by Lynn Ahrens, music by Stephen Flaherty, currently showing at the Drayton Arms Theatre, London.

Theatre often requires us to suspend our disbelief; with a plot line requiring us to accept that a young Englishman will inherit $6 million from his dead American Uncle, Tony Hendon, played by Paul Tate, but only if he takes the dead body on the last trip of a “life”time to Monte Carlo, that is certainly the case.  Matthew Whitby playing Tony’s nephew, Harry Witherspoon, takes up the challenge with eager gusto. Chasing the inheritance as rightly hers is gangster’s moll and Tony’s girlfriend, Rita La Porta, portrayed enthusiastically by Elizabeth Chadwick.  Rita is accompanied by her nervy optometrist brother, Vincent Di Ruzzio, who is escaping a contract over his head, played competently by Andrew Truluck.  The exodus from the USA is completed by charity worker, Annabel Glick, played beautifully by Michelle Crook, who works for the dog’s home that also wants to get its hands on the money. 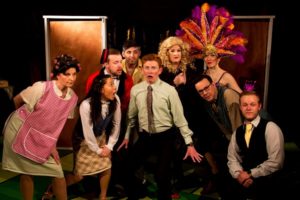 A canter through the French Riviera by a plethora of characters, including a saucy show-girl, a nun, a French waiter, a cheeky bell boy, ensues.  The energy is high and the pace is exhausting. The scene changes are a little wearing on the audience, but an inevitable consequence of the genre that is farce and worth it to watch a corpse in a wheel chair being taken scuba-diving.  You were advised to expect the unexpected.

The singing is of very high quality, although it is probably fair to say that the girls outshine the boys, but the tongue in cheek madness of this production is conveyed as one.  The inevitable love story between Harry and Miss Glick are portrayed with impeccable comic timing, although the star of the show in this regard is Rita. She manages to provide us with a larger than life, credible moll, just this side of cliché. 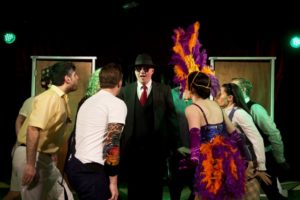 The unraveling of the plot certainly holds its surprises for audience and cast alike and provides the pinnacle of the comic moments of the night.  It even surpasses the scuba diving wheelchair incident.

Bizarre, madcap, weird?  Yes, but if high energy, musical farce with a large injection of comedy is your thing, Lucky Stiff at the Drayton Arms is the show for you.  Even if it isn’t, but you fancy a fun night out, give it a whirl.

Lucky Stiff is produced by MKEC Productions and is playing at the Drayton Arms Theatre, Brompton Road, London until 14th May