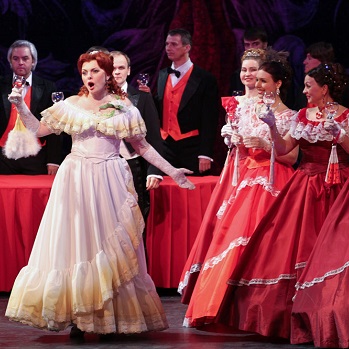 On Friday I was kindly invited by The Hawth Crawley and Amande Concerts to review Giuseppe Verdi’s La Traviata performed by the renowned Russian State Ballet and Opera House.

To my shame I had never been to a full length opera before, therefore was excited beyond belief. Who doesn’t love a bit of high drama and passion and all sung in Italian too? I couldn’t wait to be educated. Not able to speak or understand a word of Italian I deliberated whether to read up on the synopsis beforehand or go for the whole ‘opera experience’ and rely on the performance to tell the story, I decided on the latter. 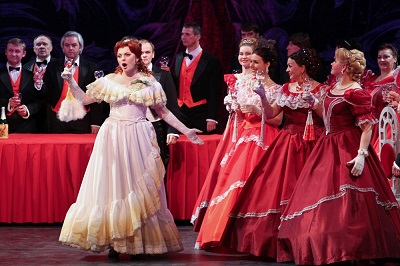 English subtitles were displayed on a screen high above the stage, at first they were distracting as the temptation to read every word meant that you didn’t watch the action on-stage but it wasn’t long before I abandoned the subtitles and got heavily involved in the unfolding story.

Had I known any Italian or read the synopsis, I would have known that ‘La Traviata’ means ‘Fallen Woman’ and that the leading character Violetta was not just a good-time party girl as I thought but a high class prostitute. So when Violetta falls in love with a handsome suitor, (Alfredo) and he whisks her away to his bachelor pad I am a bit put out when Alfredo’s Father appears intent on splitting the love birds up.

By the second act, I have been brought up to speed with her dubious past however I am so convinced of Violetta and Alfredo’s love that I am rooting for them all the way to conquer all obstacles and find true love and happiness. 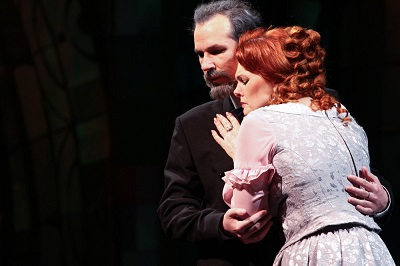 The tragic story (am I giving too much away here?) is described as one of Verdi’s greatest and you can see why, not only was there scandal and high drama but the music was glorious. It had beautifully haunting arias coupled with  the lighthearted drinking song Libiamo ne’ licit calici which would be instantly recognisable to many and has stuck in my mind since.

The production had a large cast and a live orchestra with over 30 musicians who together brought the splendour and gaiety of mid-19th century Parisian life to the Hawth. I was impressed with the sheer amount of singing that the leading lady had to accomplish during the opera never falling once. Her melodic voice will stay with me for a long time, as will the whole production.

It was my first visit to the opera but certainly won’t be my last. I look forward to being educated further. I see that the Russian State Ballet and Opera House Company’s next tour will be Madam Butterfly,  I shall look forward to it.

La Traviata is on tourthroughout the UK this Autumn, there is another chance to catch La Traviata at Hastings White Rock Theatre – on 8th October 2015 – Buy tickets here