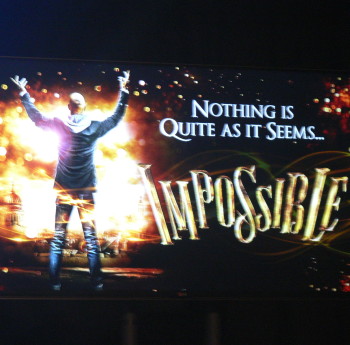 I was very lucky this week to have been invited to the swanky Hospital Club in the heart of London for the ‘Impossible’ press launch.

‘Impossible’ is a new show that is opens at the Noel Coward Theatre in London this summer bringing together eight of the world’s finest magicians in what promises to re-establish London as the ‘epicentre of innovation and spectacle’.

The art of magic and illusion has changed a lot from Sunday night TV in the 1970s and 1980s, it has stepped up a gear and become more mystifying than ever. Judging by the tasters we were shown this week , ‘Impossible’ is set to amaze and thrill audiences young and old.

Ever the sceptic, I was determined to make use of this unique opportunity and although my lips would have been firmly sealed for the purpose of this write-up, I was looking forward to getting close to the action and spotting how these clever tricks were done.

I didn’t have a hope! I am none the wiser.

I was less than 10 feet away and saw magician Ali Cook being handcuffed, placed in a neck brace and then climb into an 80 litre tank of water which was then securely sealed and stood on by his assistant but I cannot for the life of me explain how in a matter of seconds they managed to change places. 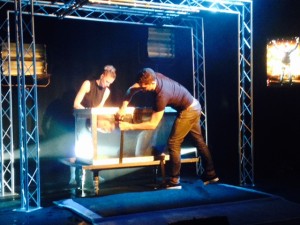 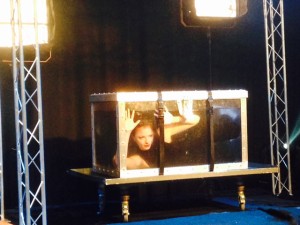 Oh yes – that old ‘sawing a woman in half’ trick? Jamie Allan goes one better! With the audience, including myself at very close proximity he places his beautiful assistant in a box and then lasers her in two! Her two ‘halves’ are pulled apart, toes wiggling and face smiling as he walks between them. There is no camera trickery here folks – truly amazing.

Jamie Allan also dumbfounded me with his digital magic – ipads can be programmed to do clever things, we all know that, but… if someone explain how he produced fire, flowers and balls out of his ipad I would be very grateful – I wouldn’t mind that app.

My final theory was blown out of the water as well. We all suspect that the assistants are just as important as the magicians in creating illusions, so when Magical Bones (AKA Richard Essien) the world’s only break dancing magician asked for a member of the audience to come out and help him I looked round to try and spot the stooge that he was pointing to. It was one of those ‘time seemed to slow down’ moments when, with a realisation of dread, I realised he was pointing to me!!! Yes – ME!!!

I went up to help him, please remember this is a PRESS launch! Lots of journalists, lots of eagle eyes, and lots and lots of cameras! Boy did I feel self conscious. However this was my moment, I was going to finally see how this was done. I picked a card from a normal deck – I wrote my name on it, I showed it to the dozens of cameras. I gave it back to him whereas he put it back in the deck, he threw the entire deck in the air DID A BACKFLIP and caught one card, I don’t need to say anymore, you know which card it was – but I wasn’t a stooge and I couldn’t have got ANY closer and I am still none the wiser. 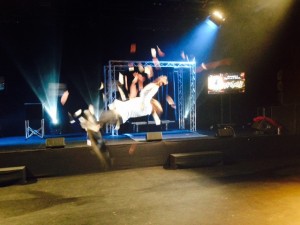 This show is going to be mind blowingly good. Each of the acts were completely different and completely mesmerizing, we stood there agog with our jaws in the round nodding appreciatively to each other. It was very impressive stuff.

Directed by Anthony Owen “Impossible” runs at the Noel Coward Theatre, St Martin’s Lane, London between 24th July and 29th August. Tickets are priced between £10 and £60 with Premier Seats also available for those who think they will spot more than me.

One thought on “Impossible | Seeing is believing – or not!”