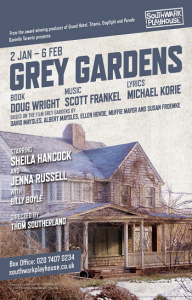 Ever been in a situation where it has felt as though everyone was in on a big secret except for you? I felt exactly that last Thursday when I attended the press performance of Grey Gardens at the Southwark Playhouse.

I had been very excited about seeing Grey Gardens, it was the UK Premiere of a Broadway hit starring one of my favourite performers Jenna Russell together with the legendary Sheila Hancock. It has also been produced by Danielle Tarento and directed by Thom Southerland – the dream team behind Grand Hotel and Titanic.

But here’s the rub, apart from the brief synopsis I knew nothing about the musical! I hadn’t seen the documentary on which it was based; I wasn’t familiar with the score and it was apparent that I was in the minority. Everyone else seemed to be anticipating something grand and there was an electric buzz amongst all the critics and reviewers as we queued for our unreserved seating. Some had seen Grey Gardens on Broadway, some knew the music well and some could even quote lines from the 1975 documentary.

Publicity had been vast. I had steered clear from reading the many articles, interviews and features, but I deliberately hadn’t read anything because I didn’t want my judgement to be swayed in any way. I did begin to wish I was at least a little more knowledgeable.

The mid seventies documentary of the same name is about the eccentric aunt and first cousin of America’s First Lady, Jacqueline Kennedy Onassis, who both live in squalor in a 28 room mansion, called Grey Gardens accompanied by several cats and raccoons. Once part of America’s socialite society they now spend their days bickering and resenting each other. I was very intrigued to see how Doug Wright had turned this bizarre subject matter about the two niggardly ladies into a musical.

Tom Rogers’ set design is startlingly impressive from the second you enter the auditorium. The crumbling interior of a grand mansion that has seen better days, littered with paraphernalia that even the audience has to navigate on the way to their seats. The attention to detail is very impressive and it sets the scene perfectly for the bizarre evening we had in store.

The play starts with a short prologue set in 1973 where we are introduced to Edith Bouvier Beale (Sheila Hancock) and her daughter Edie (Jenna Russell) wandering around their mansion discussing cats and arguing between themselves. They reminisce over a record ‘The Girl who has Everything’ before they cleverly transport us back to their heyday in the early forties. Russell now takes the role of the Mother and Hancock retreats backstage where she remains for the remainder of the first act.

Although the set remains dilapidated and rancid, the whole feel of the production changes. Edith, now confident and glamorous is planning the engagement party for her beautiful daughter Edie (now played by Rachel Anne Rayham) and Joseph Kennedy, the older brother of JFK (Aaron Sidwell), entertainment is being planned, Edith’s husband is expected home soon and the young Jacqueline and her sister Lee are racing around being entertained by their Grandfather Major John Vernou Beale (Billy Boyle).

It does not take long however for the cracks in all their relationships to show. There is a real antipathy between the mother and daughter as Edith manipulates the evening and, in extension, her daughter’s life. By the end of the act, Edie’s life is in tatters and she tries to break free from her Mother’s grip.

Whereas the first act is entirely fictional, it goes some way to explaining the second which brings us back to 1973 and the squalid way in which Edith and Edie now live. Much of the dialogue is lifted from the documentary itself and is cleverly interwoven with the marvellous songs by Scott Frankel and Michael Korie. In the first act, the numbers had a forties, celebratory feel to them and used Lee Proud’s inspired choreography to negotiate the actors round the cluttered stage., The second act brought a contrast to this however, flitting between comical and emotional songs regularly.

Edith may have been described as ‘an actress without a stage’, but Jenna Russell certainly commands this one. She proves yet again what a truly gifted performer she is by carrying off the two versions of Edith flawlessly, portraying the many facets of this complicated character so that we admire, laugh at, understand and pity Edith/Edie all at the same time. Her heartbreaking rendition of ‘Another Winter in a Summer Town’ at the end of the show is beautiful as she sums up all Edie’s desperation and regrets.

Hancock who despite hardly appearing in the first act, certainly makes up for lost time in the second, her portrayal of the physically frail yet emotionally needy Edith is spot-on.

All the supporting cast are fantastic but Rachel Anne Rayham playing ‘little’ Edie deserves a special mention. She features as much in the first act as Hancock in the second and is a pure delight to watch as she portrays a flighty, vivacious girl longing for escape but stuck under the thumb of her scheming and selfish Mother.

Grey Gardens is very unusual but I was entranced from start to finish. It was a privilege to be there and at time of writing, it is sold out and you need to call the theatre for returns. This is a PERFECT show to watch for musical theatre fans who like something a little quirky and off the wall although if you are looking for something more conventional I am not sure this show would suit. Saying that, the run at the Southwark Playhouse is in my opinion far too short and it is in desperate need of a transfer to a more central venue so that many others can see this brilliant piece of work.

Since posting my review this afternoon I have spent the last hour and a half watching the original Grey Gardens documentary filmed by Albert and David Maysles.

My admiration for the above production and in particular Jenna Russell and Sheila Hancock has increased further.
The essence of the documentary is perfectly captured in their performances. The eccentric and bizarre behaviour of the two Ediths portrayed in 1975 is emulated meticulously accurately by these immensely talented women. Bravo to all involved in the production.