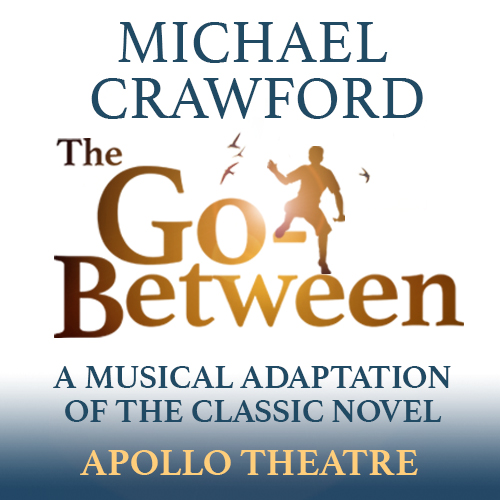 The Go Between | Review

‘Oo, Michael Crawford – did you see him in Phantom?’

Unfortunately, I did not, but I am extremely glad to say I have seen him perform in The Go-Between, playing at the Apollo Theatre until the 15th October 2016. Crawford’s performance is gripping and is supported by an equally talented cast.

The opening scene sees Crawford, as the adult Leo Colston, stumbling upon the diary of his youth, forcing him to relive the events of a summer spent at the home his childhood friend Marcus. What unfolds, against the will of the ghost-like Colston, is the coming-of-age story of a young boy playing messenger to two lovers across the social divide of a turn-of-the century Norfolk estate. 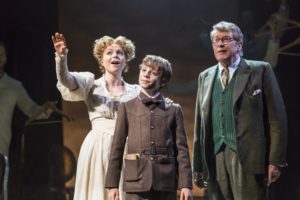 Marian Maudsley, played by actor Gemma Sutton, is the upper class young woman who has caught the attentions of both an adoring young Leo, and an altogether more adult Ted (Stuart Ward), a tenant-farmer. Marian and Ted must conduct their affair away from the prying eyes of her mother (Issy van Randwyck), and Marian’s potential suitor Viscount Trimingham (Stephen Carlile), and rely on Leo (Luca Green in our performance) to be their go-between.

The story is played out across a beautifully sparse set, designed by Michale Pavelka, with chairs and a single trunk serving to create multiple locations such as the family home, a boutique, and a farmhouse. As someone who had not read the original book by L. P. Hartley (shameful, I know, but at least I can now boastfully counter that I’ve seen the musical), the climactic scene of the play left me a little at sea. Thankfully the poignant “epilogue” between Crawford and Sutton helps fill in the gaps.

Supporting roles are beautifully acted by John Addison, Jenni Bowden, Julian Forsyth and Silas Wyatt-Barke, but special mention must go to the youngest actors, Luca Green and Samuel Menhinick, whose dynamic energy and youthful banter bring the stage to life. 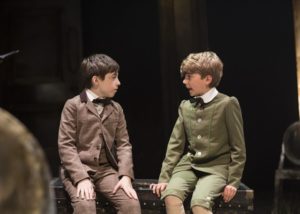 Overall, the musical is beautifully executed, and although the musical chairs business does at times become a little tedious, the brief moments of physical theatre really heighten the dramatic elements of the plot. To top it all, Richard Taylor’s score is strikingly haunting, the understated combination of solo piano (provided by an onstage Nigel Lilley) and harmonic vocals enough to induce spine tingles throughout the performance.

If you do get the chance to see it, go go go! Michael Crawford after all!

(Did I just write a review about Michael Crawford? Oh my days…)

The Go-Between at the Apollo Theatre, Shaftesbury Avenue, London.

Based on the novel by L.P. Hartley.

Developed in association with Perfect Pitch.

This trip was a trip sponsored by TheatreBloggers and StageDoorApp, we thank them for the opportunity to see The Go Between.