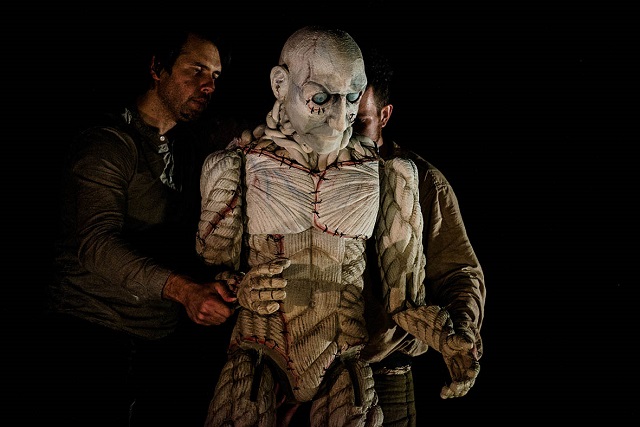 Signs of a good show include being gripped to the edge of your seat, hanging off of a performer’s every word, every action, or having a dropped jaw for most of the show without realising. I can confirm I experienced all of the above when I visited Eastbourne’s Devonshire Park Theatre for Blackeyed Theatre Company’s imaginative adaptation of Frankenstein.

I must admit I approached this with a slight scepticism, although I fell in love with the idea of the creature being portrayed through puppetry, I wondered if a smaller scaled production and cast of five would deliver the depth required for such a rich and timeless classic. These woes were put aside from the moment Ben Warwick stepped on stage. He played Victor Frankenstein with such an energy, delivering a flawless and unique performance that had me gripped from the start. He was the catalyst on stage as the rest of the cast came to life around him. Him, and of course, his counter part of the creature, which was to be revealed later.

The first half set the scene, and gave a rich insight into the background of the character, it contained the letters from the novel that many adaptations neglect, giving added depth and allowing the story to follow a close structure of the book. Frankenstein is addressing his past and recounting his story to boat captain James Walton, but of course he is recreating the experience to his audience. He delivered his story with a dominating pronunciation to the audience, his strong eye contact with everyone in the auditorium ensured we were all heavily invested into this gothic world that was being created on stage.

The reveal of The Creature towards the end of the first half was iconic and intelligent. The puppet created by Yvonne Stone is a thing of beauty, ironic when the idea is that he is hideous and detestable to the eyes of man. As the curtain drops he is lay down on the bed, the movement of the puppeteers was exceptional as he took deep breaths, blinked, and was completely mobile around the stage. There was one moment that gave me shivers and full credit must go to  lighting designer Charlotte McClelland, as the creature emerged from the smoke and shadows his face slowly lit out of the darkness, a slow reveal that created a remarkable image.

The second half creates a perfect balance between the stories of the two men by portraying  their symmetry, allowing the audience to discover just how similar the two men are – this emphasised the harsh contrast when Victor detests the very sight of his creation. The portrayal of the Creature through a puppet added a sense of awe not seen in many other productions. It helped to reflect its grotesque nature, and added another dimension to the character that couldn’t be delivered by a single actor. The voice acting showed an incredible range and emotion, with multiple voices being used to great effect, adding to the twisted torment of the creature, who is just trying to understand his own mind. It created a window into his personality, not seen in other versions. The effect of having a singular voice when the creature discussed deeply emotional topics emphasised his solitude and anguish, creating a powerful insight into the character’s own existence.

I loved the fact that that the music was created on stage by the actors with a drum, cymbal, bow, and Frankenstein’s instruments of life. Overall it was a very inventive, imaginative adaptation that I cannot recommend highly enough. Blackeyed Theatre Company tick all of the boxes for me, as they create accessible and affordable theatre with many of their shows on the school syllabus. This production could be a gateway for inspiring younger audiences to love live theatre.

Frankenstein is being performed by the Blackeyed Theatre Company at the Devonshire Park Theatre in Eastbourne until Saturday 19th November BUY TICKETS HERE before continuing on it’s nationwide tour .