Cracking two eggs to make an omelette, Orphee Productions’ Eggs scrambled the lives of two young women and poached some serious topics into an hour’s performance. Whisking friendship, death and IVF at high speed, The Vaults provided the toasted derelict building for the duo to explore their character’s lives after the joys of university.

With the show’s leaflet in hand, these unnamed characters created an unusual distant engagement with its audience. Shunned from their girl gang, Girl 1 and Girl 2 simply became subjects rather than individuals. Without their names, they were unsociable and lacked personal connection through pretty deep content. 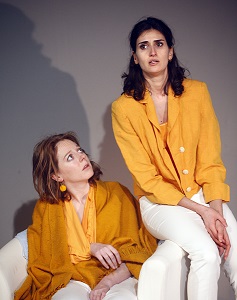 Florence Keith-Roach plays Girl 1 with quirkiness. Walking through life in metaphors, she believes in the artistic wonders of her existence. As a “product” of IVF, she constantly returns to this gift or hindrance of being a “test tube baby”. Her comical monologues provide some wacky outlooks on life, but she often dives into scientific self-assessments, wondering on her forced creation. Playing the outsider, Girl 1 seeks happiness and stability through her friendship with Girl 2, but rejection and isolation psyches herself up for a mental breakdown.

Amani Zardoe plays Girl 2 with eloquent classy style and restores normality. She represents the girl who you wish you could be. She’s got the beauty and the corporate career, but looks can be deceiving. Being the “IT” girl, her office romances and bumpy relationships reveal her constant heartbreak. Eggs fries Girl 2 for neglecting her friendship with Girl 1 and leaves her life splattered with an ultimate decision at the end.

Depending on your sense of humour, Eggs relies upon the audience’s laughter to confirm its funniness and boosts the confidence for those onstage. The girls’ delivery created some great moments of banter, but there were other lines which were just sniggered at. Their yolk yellow costumes creatively referenced the play’s title, but the costume changes between scenes slowed the comical snapshot pace. 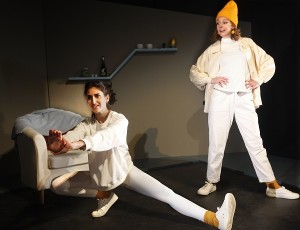 Eggs was a hard boiled egg, with a few funny cracks. The play dipped into a woman’s alternative perspective towards society and introduced some raw subject matters. The bonding between these girls expressed the emotions during separation and unity. With spits of oiled comedy, Orphee Productions’ had laid a good egg.