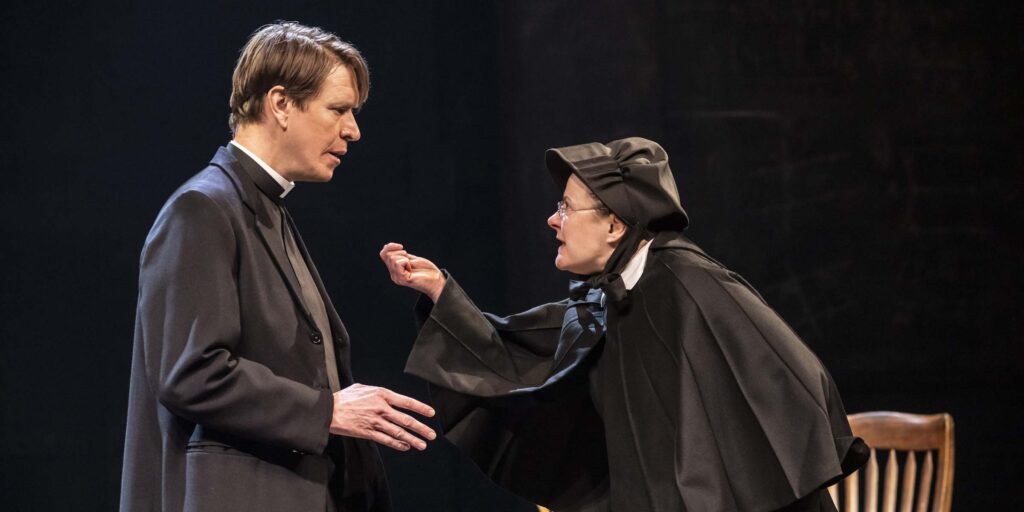 Originally scheduled for March last year this new production has finally been brought to the stage.  With the struggles of the past two years behind us, hopefully we can now look forward to many more inspiring works such as this one and re-energise the arts and live theatre.

Written in 2005 by John Patrick Shanley, this award-winning religious scandal is set in 1960’s New York and charts the mighty clash between the abrasive, traditionalist School Principal Sister Aloysius Beauvier and charismatic, forward-thinking Father Brendan Flynn.  An epic battle of wills ensues as suspicion mounts and wrong doing is addressed.  Can either of these strong characters come out of this unscathed?

Designer Joanna Scotcher’s superb yet simple set with highly effective backdrop clearly aids this emotional and compelling drama.  Lia Williams, who is also an award-winning actress, directs the talented quartet, all of whom give outstanding performances.  Rebecca Scroggs plays Mrs Muller whose vulnerable son is at the centre of the suspicions.  Younger Sister James is sensitively portrayed by Jessica Rhodes who is put in an impossible position as she wishes to give support on both sides.  Sam Spruell’s first stage role in four and a half years and first time in Chichester, excels as Father Flynn vehemently denying any inappropriate behaviour and yet does his ultimate decision infer a confession?  Monica Dolan, who needs no introduction with her multi theatre/film/tv credits, gives a masterclass in her mammoth role as the sharp-tongued School Principal.  Fiercely protective of her traditional values tension builds as she campaigns relentlessly to have the young priest removed from her school.

This production gives a powerful insight into complicated issues superbly delivered and leaves the audience to question (or doubt) their own theories as to the validity or lack of evidence in this psychological journey.