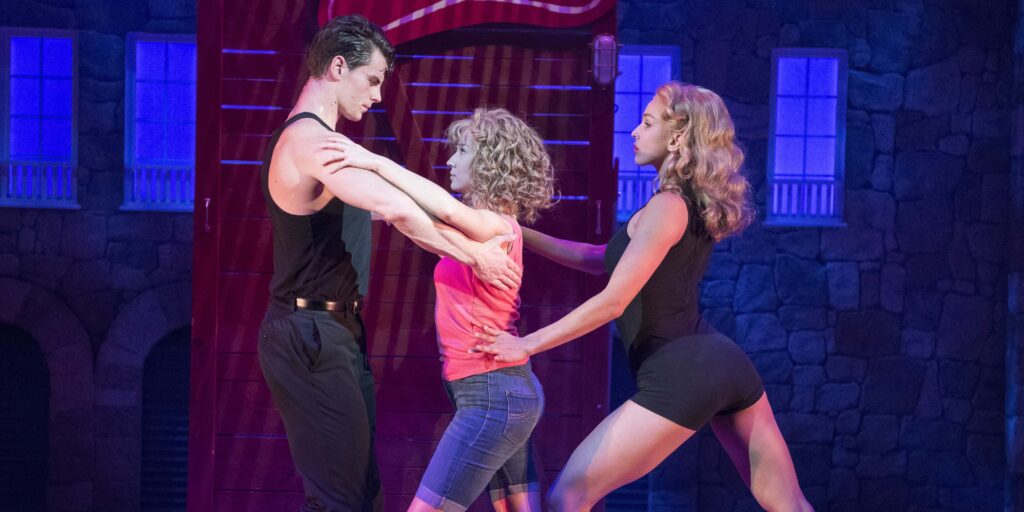 Wow! What a show! What a night! ‘Dirty Dancing’ comes to Brighton and suddenly the awfulness of the theatre’s dark days of 2020 were crushed by the sheer joy of the first night’s explosive performance of this iconic story.

It was entertainment on steroids, magical and joyous. The day had been an excessively warm one, nearly 30 degrees, and it did not cool down. This show is hot, hot hot!

But, ssssshhhhh! A secret: I’m not generally a huge fan of musicals, but this was something else, not least because the time was real, the music was real and the actual story was real (well, almost). It was originally a drama written for film by Eleanor Bernstein, mostly autobiographical, with the back stories based on others in her peer group, and the social atmosphere at the time.

Having been around for the original 1987 film when that song – (‘I’ve had) the Time of my Life’ – became the soundtrack to so many teenage lives, I couldn’t help wondering how any performer could measure up to the film’s protagonists, played by Jennifer Grey and Patrick Swayze (now who could forget HIM?). The leads in this production (Kira Malou, Michael O’Reilly) did not disappoint. Not one bit.

The film was once described as ‘a metaphor for America in the summer of 1963’. Set in the heady days before the shocking deaths of Kennedy and Martin Luther King, it epitomises the post war late ‘50s/early ‘60s, still an age of innocence and vigilante parents desperately trying to preserve their offsprings’ chastity, shortly before the Beatles, the Stones and free love took over. Boys bursting with hormones, and girls tempting them in their pointy bras, tight waisted halter neck dresses and swirling petticoats.

Since the film, there has been a prequel, sequel, a TV documentary and several shows, plus other stage versions. It seems we just never tire of this ‘girl meets boy and falls in love’ good feeling brew with a couple of heaped teaspoons of pathos and zeitgeist themes thrown in.

The story centres on the Houseman parents (Lynden Edwards, Jackie Morrison) and their two daughters, Frances ‘Baby’ (Kira Malou) and her older sister Lisa (Lizzie Ottley) taking their annual vacation at the Kellerman’s resort, owned by Jake Houseman’s friend Max (Michael Remick). Soon ‘Baby’ observes Johnny Castle (Michael O’Reilly), one of the young troupe of working class entertainment staff being denigrated by his boss. And so it begins. The love story is set against a period backdrop of class division and snobbery, teenage unmarried pregnancy (still scandalous at that time), young male machismo and ‘doing the right thing’.

This production, faithful in detail to the original film, handled all these themes beautifully, the songs and the scenes seeming effortlessly to segue from one to another without a breath being drawn. The set was fairly minimal, with a painted background of sea and mountains, constantly changing from inside to out, day to night, mainly achieving these changes by the use of highly effective lighting techniques and various neon signs. Very clever. The fabulous sound of the big band, still lingering in the last days of their huge 1940s popularity, was joyously delivered by the talented musicians on stage, and the ensemble performers were just a joy to watch. The first act – giving us no fewer than 24 songs – left us breathless. Calming down during the interval did nothing to prepare us for the ‘straight in with a bang’ launching of Act 2 which hurled us onto a rollercoaster of emotions. It was funny, happy, teary and laugh-out-loud. Wondrous stuff.

And the dancing! The choreographers Austin Wilks, & Carly Milner are to be congratulated. Absolutely incredible…. Everyone was faultless, however what a standout performance from The Talented Mr Michael O’Reilly! I noticed that there was a plethora of young women in the audience and when he came on stage you could see why, there was an audible phwarrrr plus a few catcalls.
He didn’t seem to mind. Let’s just say that Michael has a passing resemblance to a young Christopher Reeve, looks to be around 6’3” and clearly works out. When the tee-shirt came off there were practically hysterics …. However, does he have talent! Not only a superb modern dancer, he also demonstrated his ballet skills – he’s appeared in Matthew Bourne’s production of ‘Lord of the Flies’ – and is a fine actor and singer, having made his professional debut in this very show, recently returning. Kira Malou also returns to her role as ‘Baby’ in a alternative production and is somewhat of a pantomime veteran.

The Theatre Royal stage is not the biggest space, and of course we were all wondering if – and how – Baby and Johnny were going to do the famous lift, with nothing like the run up she had in the film. Well, I’m not giving anything away, except to say that the auditorium erupted. At the finale the whole audience delivered a standing ovation, singing, swinging, laughing, crying.

No one wanted it to end, and indeed the band kept on delivering whilst we were still clapping and cheering.

I could dredge up many superlatives for this stunning production of ‘Dirty Dancing’, it is certainly up there as one of the best nights at the theatre I’ve ever experienced. Go see for yourselves. You’re guaranteed to have your own ‘Time of Your Life’!