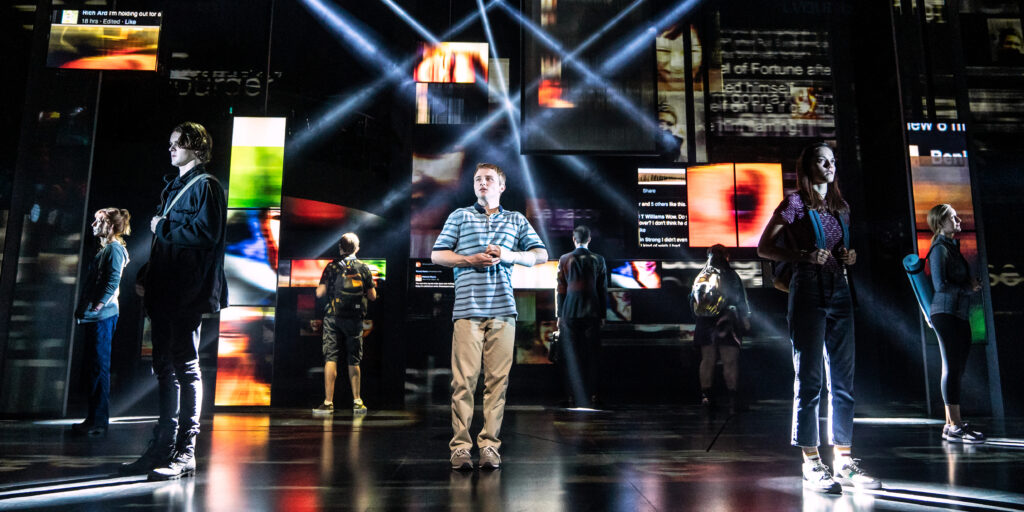 Dear Evan Hansen follows a high school senior with social anxiety who invents an important role for himself in a tragedy that he did not earn. It’s an interesting idea that touches on psychological projection and our need to attach ourselves to other people’s success and demise by associating ourselves with them by any means possible. It also tackles the themes of bullying, loneliness and suicide which may not sound like the makings of a hit musical, but those are the elements that make this musical inspirational especially amongst younger audiences. Both deeply personal and profoundly contemporary, Dear Evan Hansen is an innovative musical about life and the way we live it.

Evan (stunningly played by Sam Tutty) is an anxious, isolated student who’s aching for understanding and belonging amid the chaos and cruelty of the social media age. He soon embarks on a journey of self-discovery when a letter he wrote for a writing exercise falls into the hands of a grieving couple whose son took his own life. Making his West End debut, Tutty manages to manifest his isolation with nervous smiles and hesitant animation, and yet he also demonstrates total technical assurance and a simply astonishing singing voice.

Elsewhere, Lucy Anderson, another debutant, is wonderful as the emotionally wary sister of Connor Murphy, the student who kills himself and Doug Colling as Connor is reminiscent of Judd Nelson in The Breakfast Club which followed the struggle of teenagers to be understood by adults and themselves nearly 40 years ago. Rebecca McKinnis as Evan’s Mum steals the show as she juggles several jobs to keep the two of them financially afloat, and there is excellent support from amongst others, Jack Loxton as computer geek, Jared Kleinman and James Winter as the emotionally suppressed father of Connor and Zoe.

Social media is central to the plot as it is every day in our modern world. You post a photo, a video, or an event to Facebook, Instagram or Twitter and within seconds the “likes” come pouring in, followed by comments, re-tweets and shares. Soon these numbers can multiply and within hours this increase can be exponential. Before we know it, the story is trending. The speed at which information can spread over the Internet is undeniable whether it is true or not. David Korins and Peter Nigrini’s exquisite design reflects this centrality with Nigrini’s projections suitably and metaphorically representing Evan’s clumsy and chaotic psychological state of mind.

Is this the perfect musical? No. You spend two and a half hours wondering not just when Evan is going to be unmasked and disgraced, but also the culpable Jared and this is something the ending disappointingly skates around, however, there are plenty of catchy songs by songwriters Benj Pasek and Justin Paul, who’ve also worked on movies La La Land and The Greatest Showman including the emotive You Will be Found and the simply splendid Waving Through a Window.