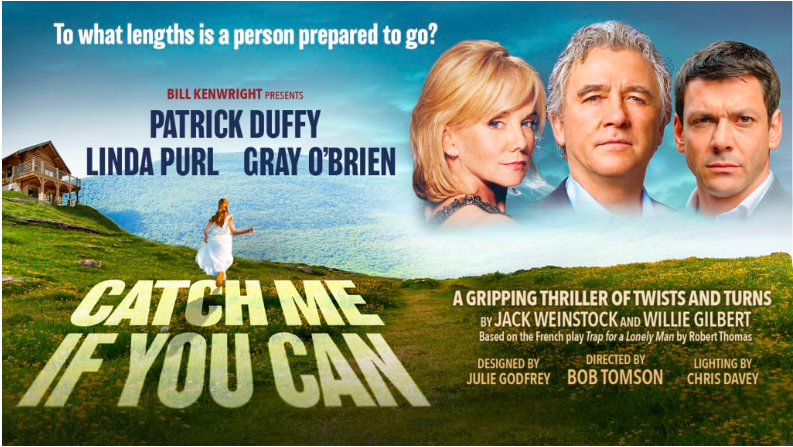 Catch Me if You Can
Congress Theatre, Eastbourne

Jack Weinstock and Willie Gilbert‘s hit thriller “Catch Me if You Can” (not to be confused with the Broadway musical), UK tour arrived in Eastbourne on Monday.

Described as a Thriller, “Catch me if you Can” surprisingly turned out to be a very entertaining comedy with the plot and intricate deceptions of a crime thriller. The décor confirms it is set in the 60s, with a landline telephone, essential in conveying much of the plot.

The play opens with a stunning set of a Catskill Mountain lodge, complete with an enormous moose head trophy. The only clue to the final outcome is that the lead character, Daniel Corban played by Patrick Duffy (Yes of Dallas fame!) is fixing a “welcome home” sign to his wife Elizabeth above the fireplace.

When Inspector Lavine enters, skilfully performed by Gray O’Brien (of Coronation St and Casualty amongst many) it emerges that Daniel Corban has reported his recently married wife Elizabeth missing, apparently after a tiff whilst on their honeymoon.

The plot evolves with the appearance of a woman (amusingly played by Linda Purl) and the audience is convinced she is in cahoots with Father Kelleher, played by Ben Nealon and pretending to be the missing Elizabeth. She’s very attractive and the audience enjoyed a few old-fashioned jokes between Lavine and Corban, about wives in general, and only just acceptable to today’s audiences. However, they went down well in Eastbourne!

A talented supporting cast progresses the plot, so the audience is convinced that Corban is disbelieved by all and is going to be the victim of a complicated swindle and probably murdered in the process.

The surprises keep on coming. An excellent production, and it was lovely to see the theatre alive again with audience enthusiasm.