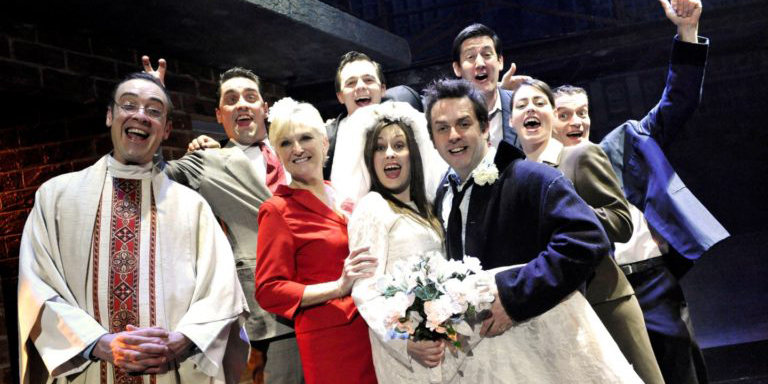 Willy Russell’s Blood Brothers premiered the stage in London in 1983, showing for nearly three decades with National and World touring groups subsequently taking the story far and wide ever since. Yet despite that, the story was an unknown for me, apart from knowing it was a well-known musical, I was excited and intrigued to see how it played out in Eastbourne’s Congress Theatre on Tuesday night.

The play starts with the ultimate ending of the story and is swiftly picked up by the narrator (Robbie Scotcher) who leads you back to the beginning of this poignant tale, touching on fundamental emotions of love and friendship and the wider nature versus nurture theory. The theme that runs through the story is that decisions made, whether based on emotional, financial, superstition or social circumstance have deep repercussions.

Lyn Paul, plays Mrs Johnstone and she absolutely fills the theatre with the emotions of falling in love, ultimately becoming a single mother, who desperately loves her children and sincerely wants the best for all of them, but struggles with the financial burden, leading to her giving one of her twins away to the financially well off Lyon family who have everything they could wish for, except for a child of their own.

As the narrator continues to move the time lines on, Robbie Scotcher, acts as the conscious of the two women, locked together by the secret they share, and the story unfolds as the children grow up, go to school, fall in love and become adults themselves.

The two boys Mickey and Edward are played by Alexander Patmore and Joel Benedict, who share a bond and friendship not knowing they are biological brothers but Blood Brothers. The story tracks their parallel timelines and their opposing social situations and experiences, which include a true friend and love interest of Linda, played by Danielle Corlass.

As the story ended, as it began, the audience were on their feet for a well-deserved standing ovation for a wonderful touching story, brilliantly and powerfully acted by all. There is no wonder that Willy Russell’s story has been told for decades and stands as true today as it did thirty years ago.

The current tour is playing at The Congress Theatre, Eastbourne between the 10th and 14th December and is an absolutely brilliant show.