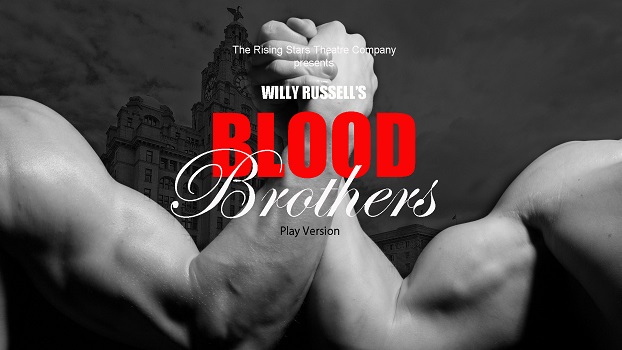 DESPITE being a theatre reviewer for the past three decades I have never managed to see Willy Russell’s Blood Brothers, an omission I was delighted to make good at Chequer Mead on Wednesday.

And I was not disappointed.

The Rising Stars Adults Theatre production was the original play, rather than the subsequent musical version, and it was, quite simply, terrific.

Russell wrote the play originally for a youth theatre production, and the 90 minute format is a masterclass in taut, unembellished, storytelling.

Sophie Pepler put in a beautiful performance as Mrs Johnston, the abandoned mother forced by poverty to surrender one of her twin boys at birth.

She had the audience in her hand from the moment she opened with the sadly ironic Like Marilyn Monroe and exuded warmth and humour as she tried to raise her unruly brood alone in the working class streets of Liverpool.

Unable to make the decision herself, she urges her employer to choose one of the twin babies and take it away – a moment of resignation and grief which Sophie rendered heartbreaking in her bewildered acceptance that she had no other choice.

And Rachel Pritchard was an ideal foil as Mrs Lyons, the childless middle-class employer to whom she surrenders Edward, in the hope of giving him a better life.

Rachel captured the neurotic Mrs Lyons’ decline into paranoia, and ultimately madness, in a nuanced performance which drove the narrative to its tragic conclusion, as the secret she had guarded even from her husband was finally exposed.

Her slim frame echoed her character’s fragility, and her eventual breakdown was a shocking piece of theatre which left one audience-goer behind me sobbing as the curtain came down.

Casting adults to portray the children from when twin Mickey is “not seven but nearly eight” and then watching them age at crucial moments in the plot into their mid twenties could have occasioned toe-curling embarrassment in less nicely-judged performances.

But the cast hit exactly the right note, neither over boisterous nor mawkish in their portrayals.

Dean Garnham was a touching Mickey. Funny and endearing as a seven-year-old, he was awkward as a teenager, blossomed briefly in love and was finally crushed by life and the jealous realisation that boys from the back streets can never make good.

While Alex Hopkins as his priggish and bookish twin Eddie brought much-needed humour to the increasingly dark tale, showing a tender nobility in his efforts to help his “blood brother” find work and a home, despite his own heartbreak at the loss of their mutual love-interest Linda.

Played by Maddi Brinkley, Linda was a typical Liverpool lass. Feisty and warm, she realised too late that she had married the wrong brother, but like generations of Liverpool women before her, she was determined to do the best she could with the hand fate had dealt her.

The role of the narrator was very ably filled by Pete Robinson, who brought a whiff of the diabolic to his all-seeing interpolations – part commentary, part plea for understanding – which filled in the gaps between scene changes.

Directed by Angela Scullin, this was a gripping and thought-provoking evening which left the audience stunned into silence at its shocking, but somehow inevitable, ending.