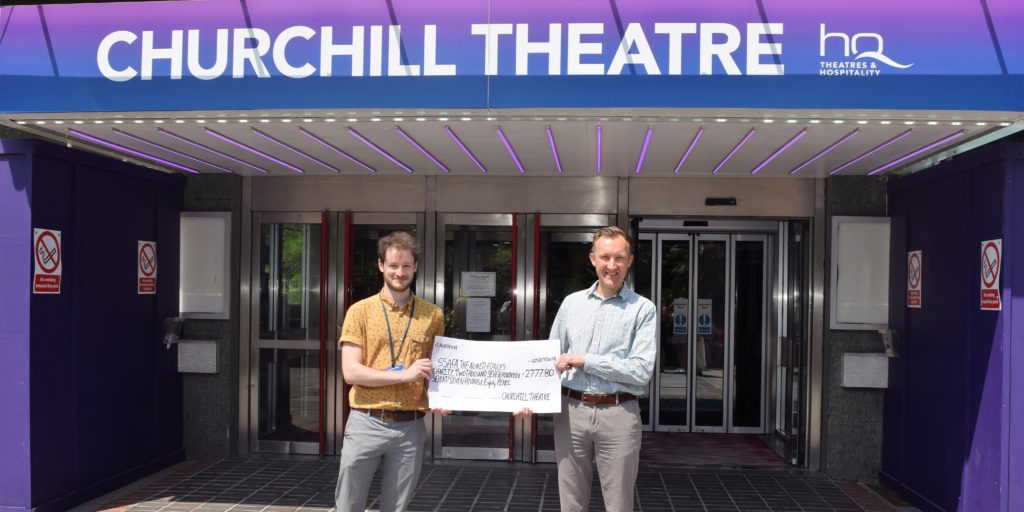 Generous theatregoers who came to the touring production of Sebastian Faulks’ ‘Birdsong’ at Churchill Theatre this May have raised an impressive £2777.80 for SSAFA – The Armed Forces Charity. Donations were collected after each show during its week-long run at the Churchill Theatre, following a few words about the charity from actor Tim Treloar who plays Jack Firebrace in the breath-taking World War One drama.

Today the Director of the Churchill Theatre, Chris Glover, was delighted to hand over the cheque to Luke Wiechula from SSAFA. Wiechula who is the Community Fundraising Officer for SSAFA commented:

‘SSAFA, the Armed Forces charity wishes to extend its sincere gratitude to the Churchill Theatre who raised a phenomenal £2777.80 through collections during the production of Sebastian Faulk’s Birdsong. The need for our services is as high today as it has ever been, and the money that they have raised will contribute to the support we will continue to provide for our Armed Forces and their families. Thanks to the Churchill Theatre’s incredible effort we can carry on training and supporting SSAFA’s network of volunteers, who alongside our staff, supported over 73,227 people in 2017 through our charitable and specialist services.’

Founded in 1885, SSAFA is the oldest national charity supporting the three Armed Forces. They provide lifelong support to men and women in the Royal Navy, the Royal Marines, the British Army and the Royal Air Force – and their families. They also work with veterans of all ages to help them settle into life and work outside of the Forces.

Further information about SSAFA can be found on their website: ssafa.org.uk