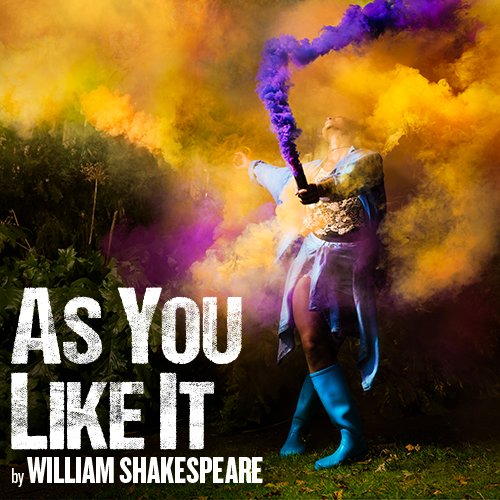 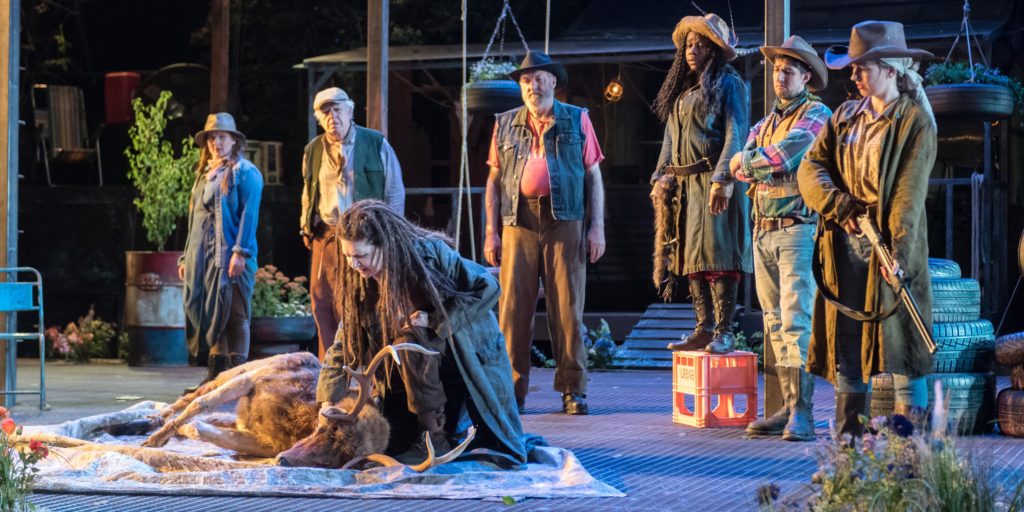 As I settled into my seat, Pimm’s in hand, I reflected to myself: I hope I haven’t missed one of the most historic games of football for a terrible retelling of Shakespeare. And it seems the gods were looking out for me, as this rendition of As You Like It, is charming, rambunctious, raucous and very funny. Even by Shakespeare’s standards, the plot has as many holes it in as a slice of Emmental cheese – Rosalind, our heroine, flees persecution from her uncle’s court, accompanied by her cousin Celia to the Forest of Arden. As with all Shakespeare play’s, there’s a bit of cross-dressing, a lot of romance, a family reunion and a duped lover who in the end is totally fine with the whole thing. But in fairness, if you’re going to a Shakespeare comedy, you’re not looking for nuance, you’re just looking for a good time, and Max Webster more than delivers on that promise.

As Rosalind, Olivia Vinnall is spirited, wonderfully laying into the humour of her role. It’s so easy to play Rosalind as either too manipulative, or simply a lovestruck sap, and Vinnall hits that sweet spot between the two, milking the comedy of her transformation into Ganymede as an awkward youth sporting an oversized hoody and a baseball cap, complete with comically deep voice. She is accompanied by Keziah Joseph as cousin Celia and it is clear that both of the actresses have a good relationship, their lines bounce off each other, picking out the humour for a modern audience who may not be attuned to translate Shakespeare’s metaphor and verse. Given the thankless role that Orlando is, Edward Hogg does an admirable job, finding humour in the role of the lovestruck, but terrible poet, wandering through the trees attempting to find something to rhyme to Rosalind, and failing – miserably. Danny Kirrane’s Touchstone is a bawdy fool, hilarious but fully laying into the innuendo of his lines, and randomly breaking out into James Blunt as he ran off hand in hand with his lover away from the priest. For his bawdy, slightly stonerish performance, Touchstone was a personal favourite but was closely matched by Maureen Beattie as “Madam Melancholy”, Jaques. The gender swap is irrelevant here, as Beattie fully commits to the maudlin but hilarious Jaques, quietly savaging everyone around her with put-downs aplenty, and at the end, leaving the stage just as quietly as she arrived on it.

I’ll admit for the first twenty or minutes or so I was very tempted to hate the play. There were some weird aesthetics going on; the front of the stage is attached to a pool, filled with rubbish that is cleared away at the end of the first act. Naturally, we are meant to understand that the court which Rosalind escapes in a modern, polluted hell hole and the forest is an idyllic escape, but even by standards, this seemed a little on the nose. I was even more taken back when the cast burst into song whilst rain poured down and they threw Starbucks cups into the pool, but after the first thirty minutes, I relaxed into it, and my enjoyment increased. The strange boxing scene at the beginning of the play was in keeping with this modern aesthetic, but the fights looked a little too staged, and so there was very little jeopardy at this moment if you didn’t know how the score went. These are minor things in fairness, as the play finds its feet the minute we leave the city and head to the Forest of Arden, as the aesthetic changes from winter to summer in the forest and a rural idyll is built around the performers, stripping away the cold metal bars to turn them into trees to climb (and attach terrible love poetry too).

There is a musicality to the performance, and not just from Charlie Fink (former frontman of Noah and the Whale) who has scored the play with a distinct, country/folk style (special mention to Me’sha Bryan who has a voice clearer than crystal and just as beautiful). There are references to modernity peppered throughout the text; original music is sang in modern English, characters break out to briefly sing lines of Beyonce and James Blunt, in a way which jars but in a pleasant style and the actors sing and dance with joyful exuberance, kicking up the pool (fair warning to the front row – bring an umbrella) and throwing around oversized teddy bears. Actors run through the gangways past audience members, and on a few occasions, even high five them. There is a distinct feeling of being in a festival, the audience brought into the fold as they clap along with the musicians and laugh as Touchstone abandons all thought of marriage for rumble in the tent with Audrey, and as the sun sets over the park, the feeling of magic in the forest only increases. Webster should be proud that he could evoke this, particularly when such a tense game of football was being played at pubs across the country, for that game felt worlds away from Regent’s Park.

It’s a shame that the World Cup didn’t end particularly well, as many audience members took their phones out as the bows took place and were greeted with disappointing news, but it took nothing away from the joy that we all felt in the audience, and the sense of magic that meant that everyone walked away with a big smile on their faces. Charming, and a true escape from the fast pace of London.

As You Like It
Regents Park Open Air Theatre