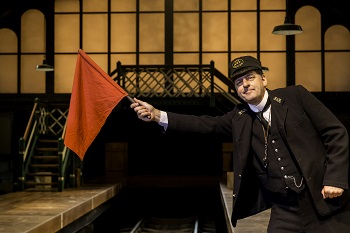 Andrew Dunn will star as Mr Perks in the Olivier Award-winning production of Mike Kenny’s stage adaptation of E. Nesbit’s novel The Railway Children – Live on Stage from Wednesday 24 June.

Andrew has appeared in numerous television series and his comedy role as ‘Tony’ in Victoria Wood’s Dinnerladies and playing Alastair Campbell for seven years in Bremner, Bird and Fortune have made him a well-known face. Andrew also played the role of Roger Stiles in Coronation Street from 2007 to 2008.

His extensive theatre work includes the UK tours of Brassed Off and The Full Monty. Andrew was also in the original casts of John Godber’s Up ‘n’ Under, Bouncers and Catherine Cookson’s Fifteen Streets.

Film credits include The Knife That Killed Me, Mr Right, Popcorn, The Jealous God, Ali G Indahouse and Between Two Women.

The Railway Children opened at the King’s Cross Theatre to critical and public acclaim on 14 January this year.