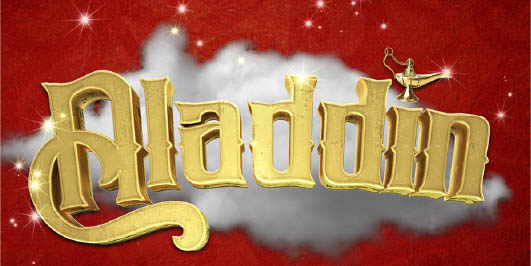 The wicked Abanazar is seeking the magic lamp that contains the all-powerful Genie, so he can rule the world, and is just steps away from succeeding! Is all hope lost? No! Help is at hand! A family posse of wannabe heroes are here to foil Abanazer’s evil scheme! The innocent local lad, Aladdin, his brother, the cheeky Wishee Washee and their fearsome mother, washerwoman Widow Twankey are ready to intervene and save the day! Throw in  a mystical Spirit of the Ring, the Emperor of China, a beautiful princess and a couple of inept policemen and you have all the ingredients for a fantastic tale and great entertainment. What could possibly go wrong?

Abanazar, played by Nicole Faraday, was suitably evil however the decision to cast a female actor in the role really didn’t work. The funniest scene in Aladdin is the interaction between this character and the Dame which elicits almost farcical dialogue as Abanazar isn’t in on the joke that Twankey is actually played by a man. This problem is accentuated by Simon Bashford who totters onto the stage with far too much effeminacy so that the joke of ‘a bloke in a frock’ is completely lost. Faraday clearly has an excellent singing voice and consequently she is required to sing a big number at the end of Act 1 which adds nothing to the plot and is utterly incongruous.

Naomi Wilkinson, a wide-eyed Spirit of the Ring and a familiar face to CBBC viewers is the star of the show demonstrating her triple threat skills in acting, singing and particularly dancing. Hers is an assured performance that deserves a much better surrounding cast. Daniel Hall is miscast as Aladdin although he does have a strong singing voice, and Sophie Lyster as Princess Jasmine is insipid and she fails to make the most of her part in her debut role.

Comedian and Britain’s Got Talent star Daliso Chaponda is this year’s comic who appears to be in a completely different show altogether. He’s sadly not very funny and his displeasure at having to join in with certain dance routines has to be seen to be believed.

Overall this is a disappointing pantomime with a dull script by Nick George that appears to have been written many years ago with a few topical references included to hopefully freshen it up – it doesn’t and direction by Alex Weatherhill is muddled. The costumes (Eve Wilkinson) and set (Stephen Wilson) seem to have been made in the same decade the script was written, thank goodness for Naomi Wilkinson who single-handedly just about makes a visit worthwhile.