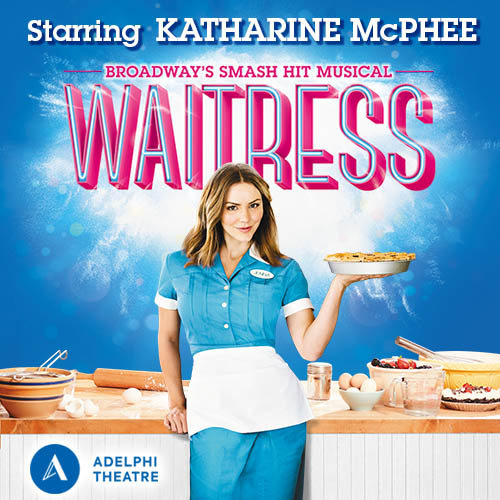 With the plethora of charming and exciting new musicals that are gracing the London stage at the moment, the latest import from Broadway, Waitress the Musical has a lot to live up to, but it seems that 2019 truly is the year of Musical theatre and the gifts just keep coming. Waitress is one of those gifts.

Katherine McPhee comes to the West End straight from the successful Broadway production to reprise the role of downtrodden Jenna.  Unhappy in her marriage to the manipulative husband Earl (Peter H), Jenna’s joy from baking speciality pies in Joe’s Diner just the way her late mother taught her. Discovering she is pregnant she is conflicted what to do. Despite not wanting the baby Jenna embarks on a chain of events which could very well give her the courage to make a brand new start. As Jenna, McPhee shines like a beacon, the role is perfectly suited to the American Idol / Smash star. She is able to use her incredible vocal range to its fullest and she has the ability to portray the vast amount of emotions that the role requires.

This is also a story of female friendships forged in the workplace. Jenna is supported by her colleagues, the irrepressible Becky (Marsha Wallace) and the lovelorn Dawn (Laura Baldwin), Waitress is undoubtably a piece written for empowering women. Each of the main characters together produce stunning harmonies yet are each given their moment in the spotlight, Wallace stops the show with her powerhouse vocals during her solo ‘I didn’t plan it’, and Baldwin’s comic timing is spot on ensuring the audience are 100% with her on her quest for love.

Don’t get me wrong, the guys aren’t all that bad either, David Hunter is perfectly cast as Jenna’s Ob/Gyn and love interest. His comic timing is impeccable and his scenes with McPhee are comedy gold. Stephen Leask fresh from School of Rock delights as Becky’s love interest and Jack McBrayer (30 Rock) hilariously plays goofy Ogie who falls head over heels with Dawn giving us the best visual gags in the show.

It is well known (at least in theatre circles) that Waitress the musical is based on a movie by Adrienne Shelly and is also able to boast that many of its creative team are female, including the director (Diane Paulus), writer (Jessie Nelson) (Sara Bareilles) and choreographer (Lorin Latarro) does this or should this, make a difference? Despite the whole cast being excellent it is the three female leads that are just the right ingredient and the show will certainly surpass other shows in the West End, so maybe it does, yet isn’t it sad that this is still a topic in 2019?

Waitress is a delicious treat. Get yourself a slice of this show, you’ll be glad you did.

Waitress the Musical is playing at the Adelphi Theatre, The Strand