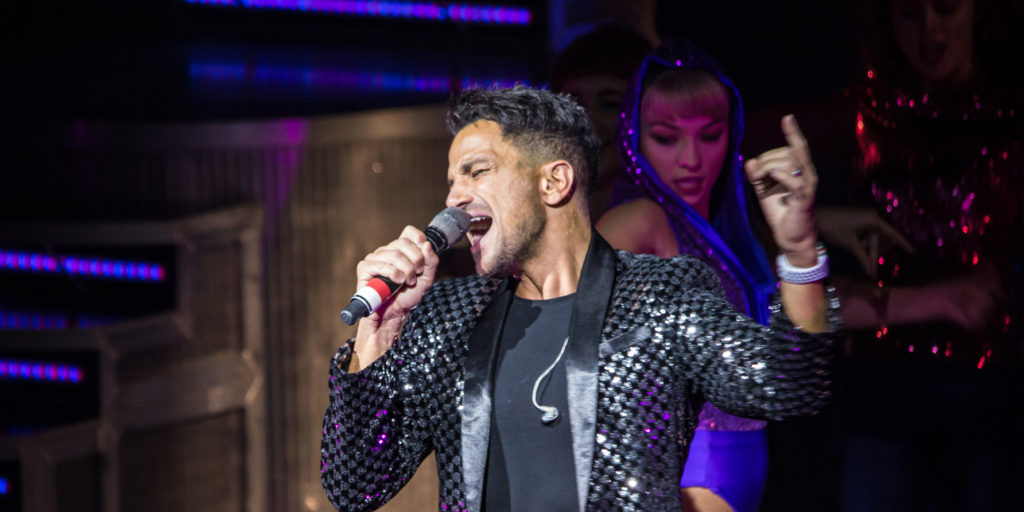 When Theatre South East was invited to review the 4000th performance of Thriller Live, how could we refuse? Particularly when this was going to be a gala charity performance to raise money for The Prince’s Trust. Impressionist Jon Culshaw and Comedian Russell Kane, both ambassadors for the Trust were to host the event and even more intriguing was that singer Peter Andre was going to join the cast during the show.

Well obviously, the main reason is it is celebrating the music of the late Michael Jackson, the undisputed King of Rock, Pop, Soul and RnB. Thriller Live is jam-packed full of his hits, beginning when he joined his brothers in the Jackson 5 to his death in 2009. His varied music continues to stand the test of time, appealing to all generations and smashing language barriers making it enjoyable for everyone.

The great thing about Thriller Live is that it is not a story of Jackson’s life, it doesn’t try to overthink itself or take itself too seriously. It is simply a celebration of his music. Name 10 Michael Jackson songs off the top of your head, chances are they are all in Thriller Live as well as many others that you had forgotten.

The cast are brim full of energy, each dance routine surpassing the last and the four main vocalists were pitch perfect, each having their own individual style thus proving how versatile Michael Jackson was.

Kieran Alleyne, one of the first actors to play ‘young Michael’ when the show opened in 2009 steps into the moonwalking shoes now as an adult and his dance routines emulating Michael were simply jaw-dropping. A highlight of the show was when he performed a dance routine with Xhanti Mbonzongwana who plays young Michael today. So much talent on the stage.

So what about Peter Andre? He wasn’t bad….he wasn’t bad AT ALL. A self-confessed Michael Jackson fan, it seemed he was born to sing his songs. Andre performed four numbers during the show, although his duet with Vivienne Ekwukugo was awesome it was his ‘Man in the Mirror’ that spontaneously brought the audience to their feet. Andre didn’t look out of place with the rest of the cast and showed that he could delight audiences on a West End stage just as much as on a huge arena tour.

The gala was a wonderful night for a very deserving charity. The Prince’s Trust helps 11 to 30 year-olds who are unemployed or struggling at school to build confidence and skills to live learn and earn. Last year the trust helped over 57,000 young people transform their lives by setting them up in business, helping them through school or by getting them into training programmes. A very worthy charity to donate to.

You can learn more about the Prince’s Trust here.

Donate to the Prince’s Trust here.