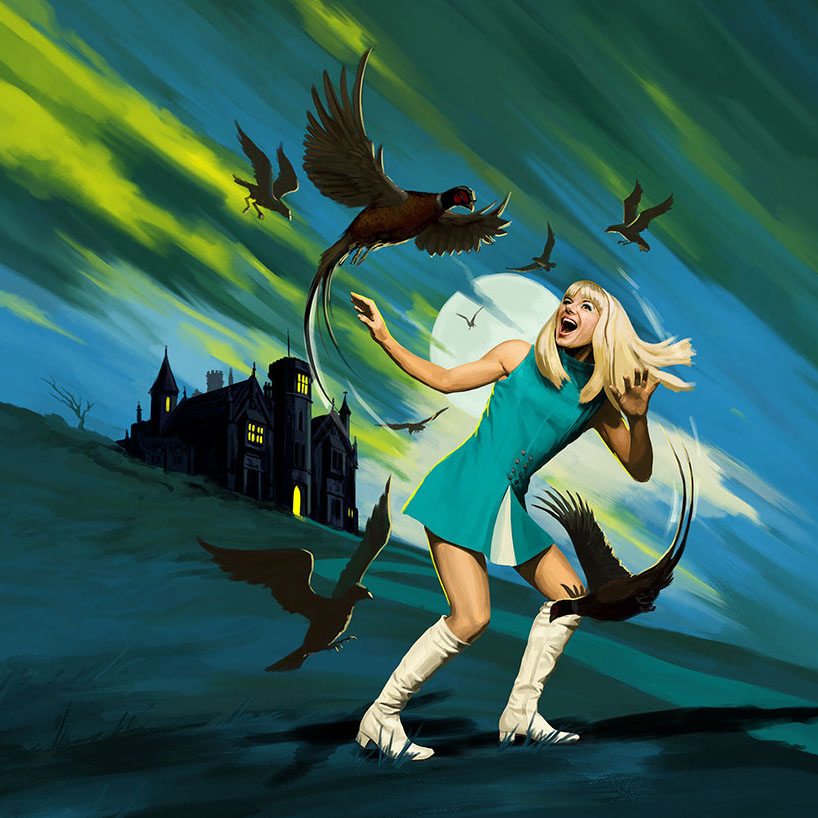 Spymonkey celebrates its 20th anniversary with the remount of their sublime comedy Cooped touring the UK and US in 2019,

To mark their 20th Anniversary year, Spymonkey are remounting their seminal production Cooped which made them an international comedy sensation from Just For Laughs Montreal to Sydney Opera House.

Programmed by Worthing Theatres in partnership with Brighton Festival, Cooped will be performed at the Pavilion Theatre, Worthing from Wednesday 22 May to Sunday 26 May 2019.

How would you describe Spymonkey to a stranger?

Aitor: Spymonkey it is a unique and original form of Funny Theatre. You see a theatre play but you laugh a lot too.

Petra: A German, A Spaniard and a Brit walk into a bar, hold onto it and start to plié. The bar breaks under the weight of the fat Spaniard so the German hits him over the head. The Brit starts to cry so then The German hits the Brit too. Suddenly the most stunning but obviously intelligent Prima Ballerina is called to the bar and shouts ”Silence in Court, Not Guilty, Objection Your Honour.” Then they all bundle each other for about two hours and fall happily asleep

Toby: A glorious bunch of idiots who like to make seriously ridiculous theatre.

But the difference is – we know and have shown to each other on numerous occasions that we are idiots and therefore get along pretty well these past two decades… The world would perhaps be a nicer place if people would admit to their foolishness.

How will Cooped make someone feel?

: All shows of Spymonkey are really funny so at the end of any show people leave feeling quite good. I like to think that there is a little bit of something for everybody.

Petra: It depends on the person. If they like this kind of thing then they may snort, wet themselves and at times be moved. If they don’t then they will sit with a lemon face and say idiots under their breath a lot. And that would be right.

Toby: We hope it will be the funniest thing they have ever seen. At the end of they will be wrung out like a limp dishcloth with tears of joy streaming down their faces and sides that ache from laughing so much. Only later, in the death despair of night, when they wake from a fitful slumber, drenched in sweat and with their pulses racing, panic rising like nausea in their chests, will they realise how profoundly disturbed they are. And will remain. Life will never be the same again, once you’ve seen it, you cannot un-know the darkness that lives in every one of us: You will never again see Cooped by Spymonkey for the first time.

Stephan: It’s their business! I’m not responsible for people’s feelings…my service only provides an hour and half of show!

Why do you think this show has been so successful to date?

Aitor: It is a very funny show. It is without a doubt the funniest show we have ever done.

Petra: Ditto my compadre and the most fun show to be in.

Toby: I think it is the purest piece of silliness we have ever made, just so much joy on one stage. It is so brimming with ideas and treats for the audience, like a magic box that keeps revealing new surprises.

Stephan: Some review we had a long time ago did say (I don’t remember the exact words.): “…it’s like to experience the pink panther on acid” and to go through such an experience sounds like good fun to me.

What’s it like performing the show again after so long?

Toby: Ask me after my triple hernia operation.

Stephan: Firstly, I’m looking forward to the sheer physical challenge. I don’t know how exactly to put in English but something along these lines: …I want to taste it again one more time after all these years. Whether we/me, have we still got it in us?

Secondly, same curious feeling re. the stupidity. To inquire or to see what has grown more over these years – our wisdom or our debility?

What are you looking forward to in performing it again?

Aitor: I am looking forward to performing the bishop again. It is a very silly character and it always bring lots of laughs, so I am excited about it.

What’s your favourite part of the show?

Aitor: My favourite parts of the show are the physical parts. There are some set pieces that without any words we play lots of funny things. I am in some of them and the ones I am not involve in I enjoy watching them from the wings. I love Toby and Petra’s Rachmaninov.

Toby: Such a lot of lovely detail in the set and costumes. I do love all the animal gags in the show – the remote-control pheasants who dance with Petra, the fox hounds and the horse who attack Aitor. It’s like a really intricate box of tricks that reveal themselves, so many brilliant surprises.

Stephan: To be honest. I don’t remember the show well enough…. I have forgotten quite a lot.

Best memory from touring Cooped in the UK and internationally?

: I have good memories of playing the show in London at Elizabeth Hall. We played Stiff and then Cooped there one after the other. An old dream of the company of doing a double bill show. Internationally my favourite gig has been playing the show in Australia at the Melbourne Comedy Festival. Those were really fun times and Just for Laughs in Montreal because we had the chance to be there with lots of friends.

Petra: Every memory is pretty golden but being at the Sydney Opera House was pretty magic even if the set only arrived about an hour before show up because Customs were confused by the Pheasant Feathers.

Toby: Yes, Sydney Opera House was very special. I had to go and beg on my knees that they let the props through, all because of those bloody pheasant feathers! And then we got it all to the opera house and were so exhausted we could barely speak our way through the show. Because of Health and Safety regulations we had to have a professional gun wrangler present for the shows in Australia, and he brought Stephan a machine gun to use as Frau Klaus. At that point in the show I am on the floor fighting with my eyes closed, so all I could hear was the shell casings hitting the floor, ping-ping-ping-ping, and then look up through haze of gun smoke to see Stephan in his dirndl and hair done up in Austrian buns on his head, toting a machine gun. So utterly stupid, joyful and funny.

Stephan: No doubt at all! I copy and paste what Toby said about the machine gun! I also remember the gun wrangler was really bored with our stupid little pistol because he had just finished a big weapon’s job on one of the ‘Mission Impossible’ movies with Tom Cruise. His eyes did light up when he saw my excitement as he suggested a machine gun. One of my best touring memories ever!

How does it feel being 20 years old?

Aitor: The show seems to have aged quite gracefully, though some of the material had to be modified because the world has changed quite a lot. But the material is still funny.

Petra: It feels like we have staying power or just too stupid to come up with anything better to do. Either way I feel very proud.

Toby: Same as what Petra says! I do like it actually, it feels like we’ve made something distinctive through a lot of really hard work. Theatre is an ephemeral thing that only exists in the here and now so you can’t bottle it or keep it, it’s only in the memories of the people who were there to see it. So, it is always nice when people come up and tell us about a particular time, they saw us, or a particular show. There have been so many phases to our life as a company, and happy memories of touring and working together in far-off places. We’ve been amazingly lucky.

Stephan: Sorry but can’t tell you. I’m the junior member of the company. I’m with Spymonkey for only 19 years. Please ask again in a year’s time!

Aitor: My favourite Spymonkey is Me, because I am in Spymonkey and thou I do not like myself it would be really weird being me there to be voting for someone else.

Petra: Lucy Bradridge followed closely by the other three

Stephan: Technically speaking I’m not really a Spymonkey. I’m their employee! Therefore, if I say that one of them is my favourite the other two bosses will be really cross with me! But on second thoughts – they’re all quite stupid in various ways!!!!!