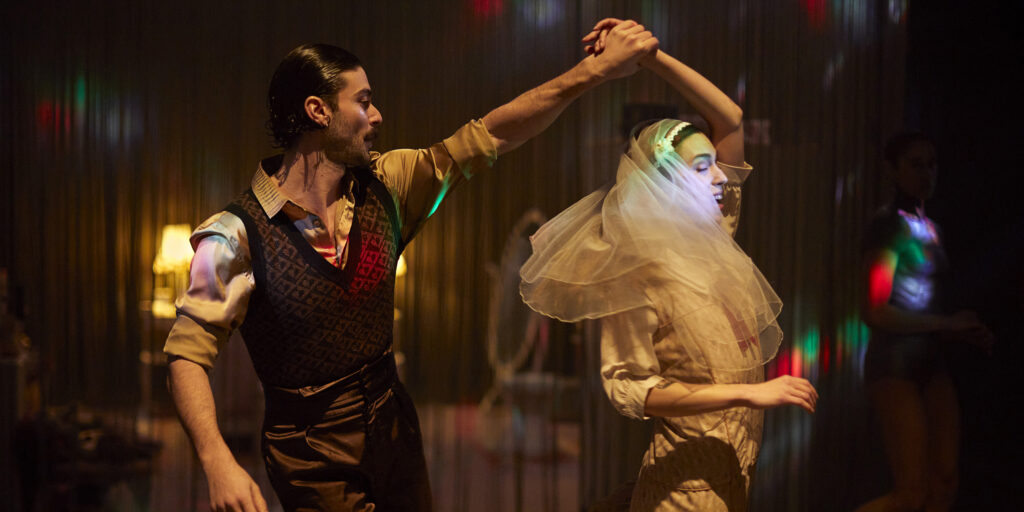 On Wednesday, the 27th April, I was invited to Punchdrunk, The Burnt City.

After a lengthy ride on the DLR to Woolwich, and an unintentional detour around the wrong side of the building, I arrived at the entrance of One Cartridge Place for the 18:30 timeslot of The Burnt City. With the queue moving quickly, it wasn’t before long before I found myself already entering the first room of the experience. Immediate intrigue is guaranteed.

Having never attended a Punchdrunk performance before, or having checked online reviews before arrival, I went into The Burnt City experience completely oblivious to what the next few hours would hold in store. This was absolutely thrilling, although initially did also come with the same feeling as if entering a haunted house on Halloween. The sudden darkness, the unfamiliar environment, and the staff members’ insistance to ‘be brave’ had me on edge.

In the smouldering promise of the fall of Troy, a mythical world of Gods and mortals rises from the ashes. As Greece teeters on the brink of victory, the neon backstreets of Downtown Troy give way to a sprawling labyrinth hiding secrets even the prophecies could not foretell. In this colossal playground, the furies watch on as mortals play out their fate. And as night falls, the city comes alive. One last time.

I am determined that this review will not reveal any spoilers or paramount details that would ruin a future viewers’ experience, however I hope to be able to give appreciation to those who have so clearly poured their heart and soul, and likely also blood sweat and tears, into this production.

The Burnt City is a production that clearly underwent a meticulous planning process and has emerged the other side with excellent execution and award winning potential. One Cartridge Place in Woolwich is an elephantine warehouse, which has been carved up into numerous smaller rooms that existed in both of the ancient cities of Troy and Greece, as well as a handful exuding a 1930s feel. Each of the stylised rooms was inherently individual, and no expense was spared on ensuring every detail was accounted for, from the handwritten letters to the discarded cigarette butts. Each set felt heavily human, and a lived experience was apparent. Despite the focus on uniqueness, there remained a seamless transition between rooms that made it feel as easy to wander around as it would be to turn the page of a book. I do not know how many rooms that warehouse held in total; the landscape could be described as quite the rabbit warren. The TARDIS, or the Narnian World Between Worlds, would also be comparable. The set designers of The Burnt City are deserved of huge appraisal.

Every actor gave a ‘ghost-like’ feel, drifting between their moments of prominence, staring with dead eyes. Some characters were certainly more haunting than others; perhaps these were the ones who had suffered more. Power and strength were common themes among storylines, but it was certainly humanism, vulnerability and loss than felt the most impactful.

Vulnerability was weaved into the costume design just as much as the performances. Costume design was headed by David Israel Reynoso, who manages to simultaneously provide further context to each character, whilst also leaving a lot more for one to interpret. Grecian attire and the 1930s style are both individually so familiar, that their peculiar collision in the form of character costume made subliminal reflection on the similarities of the time periods inevitable. The costumes also incorporated the human form frequently, accentuating muscles and curve, reinforcing the humanism of the characters and their stories.

As an audience member, you are within the experience for 3 hours in total, with each storyline resetting every hour. The cyclicality of the show could be interpreted as the unwavering assurance of history repeating itself, although more likely is the practical logistical solution to experiencing as much of Punchdrunk as you can in 180 minutes. None-withstanding, I genuinely believe one could attend The Burnt City experience 12 or more times, and always discover a new room or notice a new detail.  Is that a good thing? Some would say everyone having a different experience is exciting. I agree it can be exciting in some contexts, and also appreciate this ‘choose your own adventure’ format is Punchdrunk’s ‘IP’; however, with standard entry ticket prices so high, and no guarantee you will make the most of your time within the landscape, I can also appreciate how this format could be frustrating to some.

I did have the most wonderful time within The Burnt City experience, and fervently believe there to be nothing else like it currently on the London scene. I would recommend to any prospective visitor, to wear comfortable footwear, put in contact lenses if you typically wear glasses, and dress in dark coloured clothes. Also, should you attend with friends, determine a meeting point to relocate at, as it is a certainty you will lose each other during the experience at least once.